Maharashtra CM Uddhav Thackeray Oath Ceremony HIGHLIGHTS: Uddhav becomes the first in the Thackeray clan to be the chief minister of Maharashtra

Maharashtra CM Uddhav Thackeray Oath Ceremony HIGHLIGHTS: Chief Minister Uddhav Thackeray Thursday assured the people of good governance in the state. “I want to help the farmers in a manner which will make them happy,” he said after chairing the first cabinet meeting of newly-sworn MLAs of the Congress-NCP-Shiv Sena combine.

Uddhav, 59, is the 19th chief minister of the state and third from the Shiv Sena. The youngest of Bal Thackeray’s three children, Uddhav was an unlikely candidate to helm the Shiv Sena. Though he has organizational experience, he has not held any official position so far and may face challenge from the stalwarts of the Congress and NCP in the government’s functioning.

Earlier in the day, the Sena-Congress-NCP combine released their Common Minimum Program, with attention to farmers’ crisis, unemployment, and health and industry sectors in the state. The preamble of the CMP assures that the three-party coalition commits to “uphold the secular values enshrined in the Constitution.”

Uddhav Thackeray is the new chief minister of Maharashtra. Here are the HIGHLIGHTS.

In the first cabinet meeting held today, Uddhav Thackeray has sanctioned Rs 20 crore for restoration of Raigad Fort of Chhatrapati Shivaji Maharaj. The Rs 606 crore project was sanctioned and work had started during Devendra Fadnavis government of BJP and Sena. Uddhav also reassured big decision to help farmers will be taken in next two days, adding that there is no ambience of fear or intimidation in governance.

Maharashtra CM Uddhav Thackeray chaired the first cabinet meeting today and assured relief for farmers. "I want to assure the people of the state that we will give a good government. I want to help the farmers in a manner which will make them happy." Uddhav said his government will announce big decision to give relief to Maharashtra farmers in two days. The Common Minimum Program of the Congress-NCP-Shiv Sena combine also promised immediate loan waiver to farmers. "This is govt for all people," he said on claims by former CM Fadnavis that Vidarbha, Marathwada regions were ignored by the new govt.

NCP's Ajit Pawar congratulates Uddhav, 'under his leadership, state will develop as a whole'

NCP leader Ajit Pawar, who had briefly supported the BJP, congratulated Shiv Sena's Uddhav Thackeray on taking oath as Maharashtra's chief minister today. "Under his leadership, the state will develop as a whole," he tweeted.

Congratulations & best wishes to the Shiv Sena Party Chief Hon. Uddhav Thackeray ji on becoming the Chief Minister of Maharashtra. Under his leadership, the State will develop as a whole!

Is Rahul ashamed to attend Thackeray's swearing-in: BJP on Sena praising Godse in past

The BJP sought to corner the Congress on Thursday over the Shiv Sena praising Mahatma Gandhi's assassin Nathuram Godse in the past and wondered if this was why Rahul Gandhi was "ashamed" to attend the swearing-in ceremony of the Maharashtra government.

The Congress-NCP alliance in Maharashtra has joined hands with the Sena, a long-time Hindutva ally of the Bharatiya Janata Party (BJP) before they split, and Sena chief Uddhav Thackeray was sworn-in as the chief minister on Thursday.

"Stop being a hypocrite Rahul Gandhi. You are making someone with identical views Chief Minister of Maharashtra. Udhav Thackeray, Editor-In-Chief of Saamana, wrote that Godse was a Patriot. Is that why you are ashamed to attend swearing-in," BJP spokesperson G V L Narasimha Rao said in a tweet. (PTI)

Prime Minister Narendra Modi congratulated Shiv Sena chief Uddhav Thackeray on taking oath as chief minister of Maharashtra. "I am confident he will work diligently for the bright future of Maharashtra," he said.

Long stints in electoral politics and past experience in handling key government departments are the hallmarks of Congress-NCP-Shiv Sena legislators who took oath as ministers along with Maharashtra Chief Minister Uddhav Thackeray at the Shivaji Park here on Thursday evening.

Thackeray is heading a coalition government, the Maha Vikas Aghadi (MVA), whose main constituents are the Sena, the Congress and the NCP.
Chhagan Bhujbal, Jayant Patil (both from the NCP), Balasaheb Thorat and Nitin Raut (both from the Congress), Eknath Shinde and Subhash Desai (both from the Sena) took oath as ministers along with Thackeray.

The oath-taking ceremony of Chief Minister Uddhav Thackeray and others concludes.

Uddhav Thackeray, 59, is the 19th chief minister of Maharashtra

Uddhav, 59, is the 19th chief minister of the state and third from the Shiv Sena. He will lead the Congress-NCP-Shiv Sena alliance in the state, over a month after results of the Maharashtra Assembly elections were declared on October 24.

Former Chief Minister Devendra Fadnavis has arrived at the swearing-in ceremony of Uddhav Thackeray and other MLAs from Congress, NCP and Shiv Sena. Uddhav will take oath as CM shortly

Former Prime Minister Manmohan Singh in a letter to Uddhav Thackeray: "I am very happy to know that you are taking oath as the 19th Chief Minister of Maharashtra. It is a historic event and I commend you on your visionary leadership."

Dr.Manmohan Singh in a letter to Uddhav Thackeray: I am very happy to know that you are taking oath as the 19th Chief Minister of Maharashtra. It is a historic event and I commend you on your visionary leadership. pic.twitter.com/6U7pUumX7r

Uddhav to become first in the Thackeray clan to become CM

Shiv Sena chief Uddhav Thackeray will take oath as Maharashtra chief minister shortly at 6.40 pm. He will be the first in the Thackeray clan, and the third Sena leader to become chief minister of the state.

Congress leader Rahul Gandhi, in a letter to Chief Minister-designate Uddhav Thackeray, says the people of Maharashtra have high expectations from the coalition. "I am confident it will provide them a stable, secular and pro-poor government," Gandhi says. 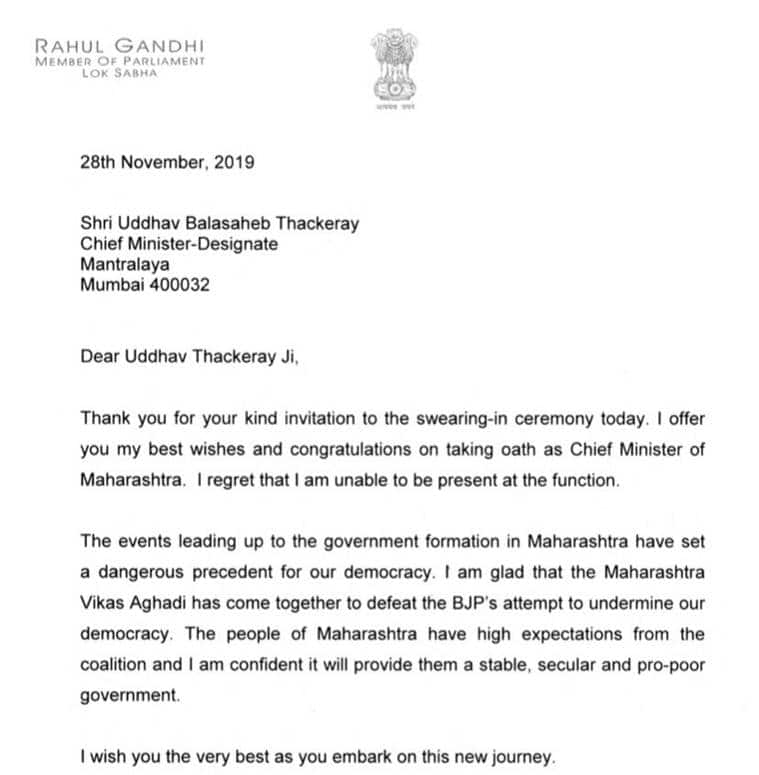 No formal invitation to Mamata

No formal invitation for @MamataOfficial for #UddhavThackeray swearing in: @derekobrienmp @IndianExpress #Maharashtra

Jaya Bachchan, Samajwadi Party congratulated Uddhav Thackeray on his oath-taking ceremony as chief minister of Maharashtra today: "Thackeray family and we share a deep and old relationship. My heartiest congratulations to him on becoming Chief Minister. I sincerely hope he works towards the betterment of Maharashtra, provides relief to farmers and gives youth employment."

Confident that Congress-NCP-Sena will uphold Constitution, value of democracy: Sonia

In a letter to Congress MLA Balasaheb Thorat, party president Sonia Gandhi said she is confident that the Congress-NCP-Shiv Sena combine will "uphold Constitution, value of democracy" in Maharashtra. 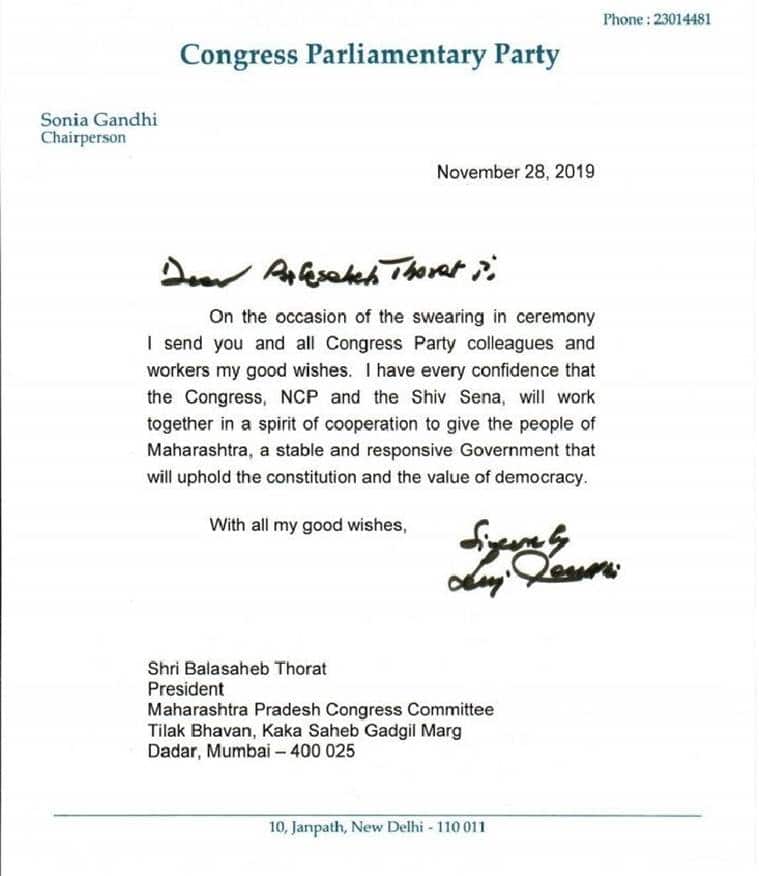 Congress president Sonia Gandhi said she is unable to attend the swearing-in ceremony in Maharashtra today. In a letter to Uddhav Thackeray, Gandhi said "Shiv Sena, NCP and Congress have come together under quite extraordinary circumstances, at a time when country faces unprecedented threats from BJP. I regret that I'll not be able to be present at the ceremony."

Sonia Gandhi in a letter to Uddhav Thackeray: Shiv Sena,NCP&Congress have come together under quite extraordinary circumstances, at a time when country faces unprecedented threats from BJP. I regret that I'll not be able to be present at the ceremony (oath-taking). #Maharashtra pic.twitter.com/wHs95Y7mV6

Other ministers to be sworn-in today

80% reservation for locals in jobs

Eknath Shinde, Shiv Sena: There will be a compulsion and a law will be enacted to ensure 80 percent reservation for locals in existing and new companies.

The first cabinet meeting of the new NCP-Congress-Shiv Sena government will be held at 8 pm today, after the oath-taking ceremony of Uddhav Thackeray as chief minister, and six other MLAs

The Sena-Congress-NCP's CMP also promises free education to girls from weaker economic backgrounds and the construction of hostels for working women to ensure safety.

Eknath Shinde, Shiv Sena said the 'Maha Vikas Aghadi' (NCP-Congress-Shiv Sena alliance) will take a decision on the Nanar Refinery Project and bullet train project in cabinet meeting. "In Maharashtra, farmers are facing problems. This government will do best for farmers. This will be a strong govt," he said.

Congress was keep on including 'secular' in CMP

The Congress, sources had told The Indian Express, was keen that the word “secular” finds mention in the Common Minimum Programme and the suggestion had emerged as a sticking point. The Congress climbed down when it was decided the CMP will spell out that the new government will adhere to the Preamble of the Constitution.

The preamble of the Common Minimum Program of 'Maha Vikas Aghadi' (NCP-Congress-Shiv Sena alliance) in Maharashtra commits to "uphold the secular valuese enshrined in the Constitution." "On contentious issues... having repercussions on the secular fabric, the Shiv Sena, NCP, and Congress will take a joint view after holding consultations," it further said. 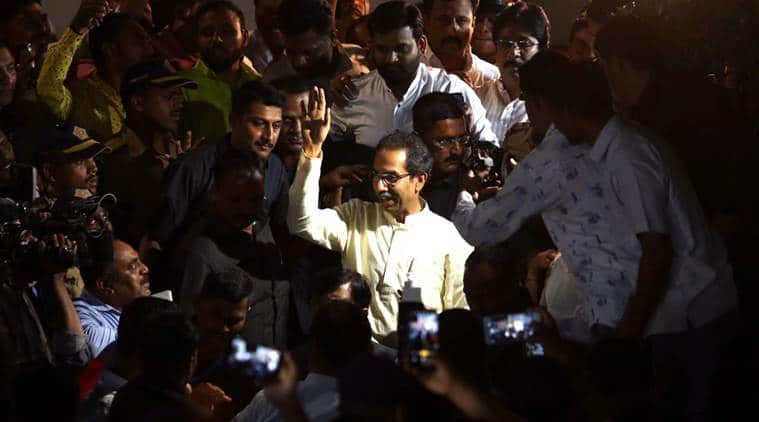 On Wednesday, the entire top brass of the three parties including Uddhav Thackeray, NCP chief Sharad Pawar, Congress’s Ahmed Patel and Mallikarjun Kharge held discussions for over four hours on the allotment of cabinet portfolios, future appointments to state-run corporations and MLCs.

The youngest of Bal Thackeray’s three children, Uddhav was an unlikely candidate to helm the Shiv Sena. A backroom boy who was more interested in cameras and the latest tech gizmos, he found himself thrown into the rough and tumble of the state’s politics by his father who believed that only he could carry forward his political legacy