Maharashtra Government Highlights: In his first major decision after assuming office as Maharashtra Chief Minister, Uddhav Thackeray Friday ordered a stay on the Aarey carshed work. Thackeray held a cabinet meeting with senior bureaucrats which was followed by a press conference where he said, “I have stayed Aarey carshed work, not a single tree leaf will be cut till further notice.” He clarified that the stay is on Aarey carshed and not on the metro development, adding that the project would resume after it is reviewed.

Thackeray will face the crucial floor test on Saturday at 2 pm. NCP leader Dilip Walse Patil has been appointed as the Protem Speaker of the state assembly as a special session of the Maharashtra Assembly has been convened tomorrow.

Earlier in the day, the Supreme Court dismissed a petition filed by Pramod Pandit Joshi, the spokesperson of Akhil Bharat Hindu Mahasabha, against the post-poll alliance of Shiv Sena, NCP and Congress in Maharashtra. Rejecting the plea, the apex court said, “Don’t expect us to go into areas where the court has no jurisdiction. The political parties have to abide by the promises made. We expect parties to abide by promises but if for some reason they don’t, we cannot do anything about it.”

Assembly Speaker, LoP to be appointed on Sunday

Uddhav Thackeray-led Maharashtra government which is a combine of Congress, NCP and Shiv Sena will face the trust vote tomorrow at 2 pm. Meanwhile, an election will take place on Sunday seeking the election of Maharashtra Assembly Speaker post which Governor will address a joint session followed by the appointment of the Leader of Opposition. BJP had elected former chief minister Devendra Fadnavis as the Leader of Opposition in Maharashtra Assembly.

Maharashtra Chief Minister Uddhav Thackeray on Friday visited legendary singer Lata Mangeshkar, who is recuperating at a city hospital. Thackeray inquired about her health, an official said. Mangeshkar, 90, was admitted to the Intensive Care Unit of Breach Candy Hospital in south Mumbai after she complained of difficulty in breathing on November 11. (PTI)

'If I run away from CM responsibility, will be called Bal Thackeray's 'nalayak' son'

Uddhav Thackeray at press conference after taking charge as Chief Minister: "I became CM unexpectedly. When this responsibility came to me, if I had run away from it, I would have been called Balasaheb Thackeray's 'nalayak' son."

Development works will continue, but harm done to environment will stop: Aaditya on the stay on Aarey car shed work

On Maharashtra CM's order to stay the Aarey car shed work, Aaditya Thackeray told ANI, "All the people of Mumbai are happy with this decision. Development works will continue but the harm that was being done to the environment will be stopped."

I've stalled metro carshed work, will resume after I review it: Uddhav Thackeray

Uddhav Thackeray in the press conference, says, "We understand that the taxpayer's money is being used for development works in the state. My government will ensure that we understand this and ensure public money is not wasted. We are going to audit expenditure thoroughly so that the work undertaken by my government is transparent. My focus is not only going to be on Mumbai but entire Maharashtra. I have stopped the Aarey carshed work today. I won't stop the development work of the metro, but I'll first review and then it can resume."

We are faced with a lot of challenges: Uddhav Thackeray's presser after taking charge as CM

On the first day of assuming office as Maharashtra Chief Minister, Uddhav Thackeray held a press conference after holding a cabinet meeting with senior bureaucrats. During the presser, Thackeray said he was happy to be sworn in as Chief Minister and said that he would undertake all his responsibilities dutifully. "There are a lot of challenges in front of us. I've been to the Mantralaya only twice or thrice and when they announce they we welcome the CM, I still look around me. Please give me constructive criticism."

After taking charge, CM Uddhav Thackeray held a meeting with senior bureaucrats and asked them not to waste a single part of public money while undertaking the development works. "The state has got first CM who is born in Mumbai. So, I will work with a dream to take Mumbai and Maharashtra forward in the country," Uddhav said in a tweet.

NCP leader Dilip Walse Patil has been appointed Protem Speaker of the Maharashtra Assembly. Besides Thackeray, six other ministers - two each from the Sena, the Congress and the NCP - also took oath.

Uddhav Thackeray who took charge as Maharashtra Chief Minister today is likely to face floor test on Saturday at 2 pm.  He is likely to make an announcement at a press conference after the cabinet meeting which is underway at the Mantralaya. Meanwhile, the Maharashtra Assembly has convened a special session ahead of the floor test tomorrow. 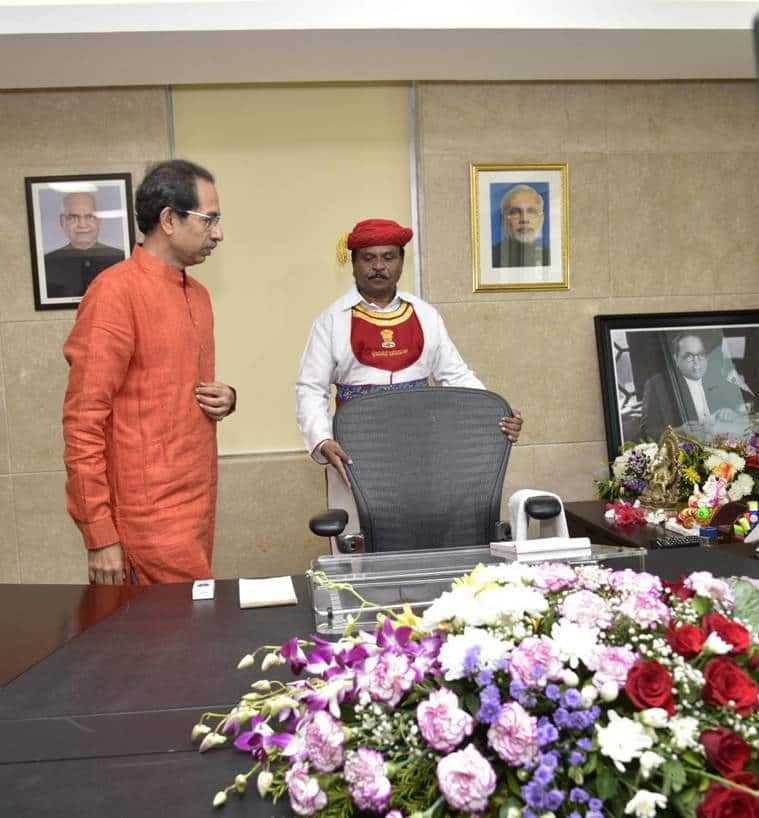 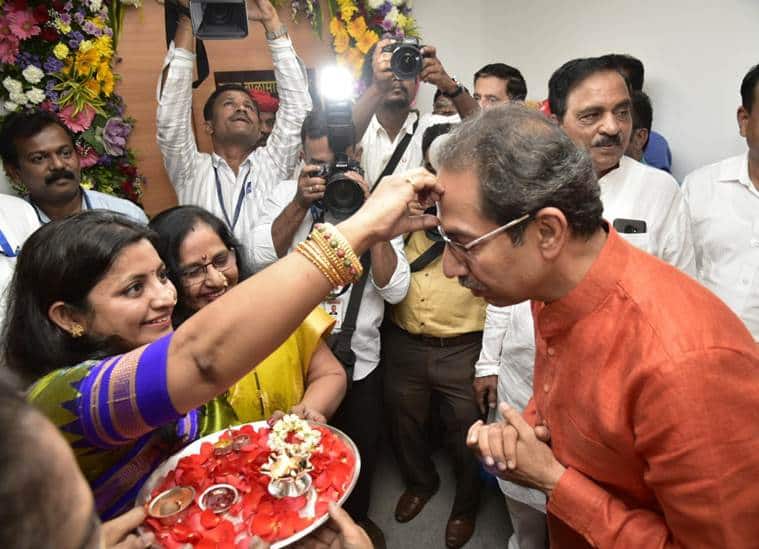 Uddhav Thackeray takes over as CM

Maharashtra Chief Minister Uddhav Thackeray arrives at Mantralaya, the state secretariat. A day after taking oath as the chief minister of Maharashtra, Thackeray formally took over the charge of the state.

Congress president Sonia Gandhi and party leaders Manmohan Singh and Rahul Gandhi skipped the swearing-in ceremony of Uddhav Thackeray on Thursday but wrote him letters, wishing him all success. In his letter, Singh conveyed his “heartfelt congratulations” to Uddhav and the ministers in his cabinet. “Certainty it is a historic event and I commend you on your visionary leadership,” he wrote. Read more...

West Bengal Chief Minister Mamata Banerjee was not invited for the swearing-in of Maharashtra Chief Minister Uddhav Thackeray, her party Trinamool Congress’s chief spokesperson and Rajya Sabha leader Derek O’Brien said on Thursday. Asked earlier on Thursday whether the TMC would be represented at Shivaji Park, O’Brien said, “Mamata Banerjee was not invited for the swearing-in ceremony. We have (had) excellent relations with the Shiv Sena since demonetisation; have collaborated on various issues. The second-rung leadership of both parties are in the same age bracket; they too may be in touch.” Read more...

Not once does CMP mention backward regions like Marathwada, Vidarbha, north Maharashtra: Fadnavis

A day after Shiv Sena chief Uddhav Thackeray was sworn in as Chief Minister of Maharashtra, the party reminded Prime Minister Narendra Modi and the central government of its responsibility to “cooperate” with the state and extend help to its farmers. In an editorial in its mouthpiece Saamana, the Sena said its relationship with the BJP is “strained”, but Uddhav and Prime Minister Narendra Modi share “brotherly ties”.  Read more...

If parties don't abide by promises, we can't do anything: SC

Supreme Court while dismissing the plea said, “Don't expect us to go into areas where the court has no jurisdiction. The political parties have to abide by the promises made. We expect parties to abide by promises but if for some reason they don't, we cannot do anything about it.” (ANI)

Supreme Court dismisses a petition filed by Pramod Pandit Joshi, the Spokesperson of Akhil Bharat Hindu Mahasabha, against the post-poll alliance in Maharashtra and to declare it as unconstitutional.

Supreme Court dismisses a petition filed by Pramod Pandit Joshi, the Spokesperson of Akhil Bharat Hindu Mahasabha, against the post poll alliance in Maharashtra and to declare it as unconstitutional.

For Uddhav, photography is oxygen and farmers are close to his heart

Shiv Sena chief Uddhav Thackeray, who was sworn in as the Chief Minister of Maharashtra on Thursday, is also an avid photographer. “Photography is like oxygen for me. My hobby is my oxygen,” Uddhav had said at an exhibition of his photography in Mumbai in January 2015. Maharashtra’s people have seen the new chief minister’s photography skills through his photo-books Maharashtra Desha, on Shivaji era forts, and Pahava Vitthal, which captures the “wari” from Alandi-Dehugaon to Pandharpur. “His photographs of forts and warkaris are show-stoppers,” said Marathi actor Aadesh Bandekar. Read more...

Abdul Sattar of Shiv Sena said the floor test for Maharashtra government may take place on Saturday. "Floor test might take place tomorrow. We're ready. Earlier we had 162 MLAs, now we're 170; number will go up. But there is no doubt that this govt has the majority, the 3 parties will perform well for these 5 yrs and be back for the next 10."

Abdul Sattar, Shiv Sena: Floor test might take place tomorrow. We're ready. Earlier we had 162 MLAs, now we're 170; number will go up. But there is no doubt that this govt has the majority, the 3 parties will perform well for these 5 yrs and be back for the next 10. #Maharashtra pic.twitter.com/i7eKO3H7Z2

Shivaji Park wore a saffron look on Thursday as Thackeray, along with six other ministers, took oath in presence of Governor Bhagat Singh Koshiyari. The Cabinet is likely to be expanded after the trust vote, which has to be held before December 3.

Besides Thackeray, the six who were also sworn in as ministers were Eknath Shinde, Subhash Desai (both Shiv Sena), Jayant Patil, Chhagan Bhujbal (both NCP), Balasaheb Thorat and Nitin Raut (both Congress).

With NCP yet to announce their decision on who will fill the deputy chief minister’s post along with crucial portfolios, speculations are rife about Ajit Pawar's probable post in the state cabinet after his break and subsequent return to the party fold.