Maharashtra HIGHLIGHTS: Devendra Fadnavis and Ajit Pawar, who took oath as chief minister and deputy chief minister on Saturday, resigned from their posts.

Shiv Sena president Uddhav Thackeray being greeted after he was chosen as the nominee for Maharashtra chief minister’s post by Shiv Sena-NCP-Congress alliance. (PTI)

Maharashtra Government Formation HIGHLIGHTS: MLAs from Shiv Sena, Congress and NCP met Maharashtra Governor Bhagat Singh Koshyari Tuesday and submitted their letters of support for Sena chief Uddhav Thackeray as the chief minister of Maharashtra.  Thackeray will be sworn in as Maharashtra chief minister at Shivaji Park on November 28. The Sena-NCP-Congress MLAs met at Trident hotel and passed a resolution appointing Uddhav as CM nominee of their front. The MLAs also passed the resolution to form ‘Maha Vikas Aghadi’, the three-party alliance in Maharashtra.

Earlier in the day, Fadnavis and Ajit Pawar resigned as the chief minister and deputy chief minister respectively hours after the Supreme Court passed an order directing floor test in the state. “We do not have majority after Ajit Pawar’s resignation,” Fadnavis said announcing his intent to resign. “We realised we don’t have the numbers and we don’t want to indulge in horse trading,” he said. Read in Malayalam

Addressing the press, Fadnavis said the poll mandate was for the BJP more so than the Shiv Sena, adding that no discussions were held with the former ally on a rotational CM post. “We won more than 70 per cent seats while Sena won around 40 per cent seats,” he said. In the 288-member Assembly, the BJP won 105 seats while the Sena won 56.

The Supreme Court passed an order stating the floor test in Maharashtra will be held tomorrow. Here are the HIGHLIGHTS.

Love showered by you will always make me nostalgic: Amruta Fadnavis thanks public

Amruta Fadnavis tweets after her husband, Devendra Fadnavis' resignation as the chief minister of Maharashtra.

Will get back to work as Opposition: Fadnavis

Caretaker chief minister of Maharashtra Devendra Fadnavis said Tuesday that he and his party will get to back to work as opposition after the Congress, Shiv Sena and NCP-led Maha Vikas Aghadi forms government in the state. Fadnavis was addressing BJP legislature party meeting on Tuesday night. 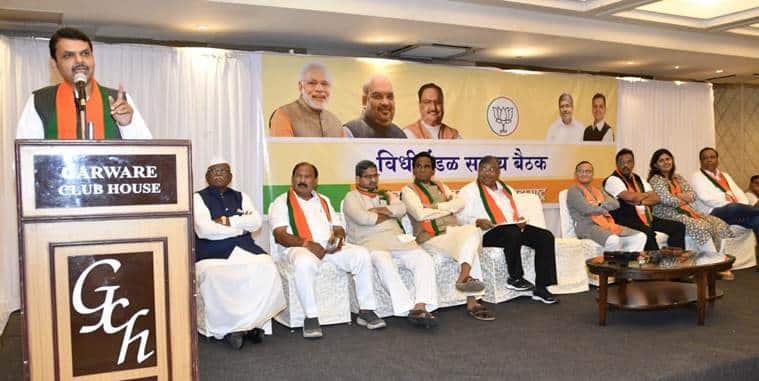 Shiv Sena's Aaditya Thackeray after meeting Maharashtra Governor Bhagat Singh Koshyari: He (Governor) gave us his time today, and the chance to form government. We want to work for the people and provide a stable government to the state. (ANI)

Uddhav's swearing in to take place on November 28

"We have met Governor along with alliance partners and submitted letters of support requesting of Governor to invite Uddhav Thackeray to take oath CM. The oath taking ceremony will take place on Thursday at 5 pm," said Jayant Patil, NCP state president.

The BJP on Tuesday reposed faith in leadership of Devendra Fadnavis. The decision was taken at the BJP state legislature party meeting late Tuesday evening.

The BJP leader Ashish Shelar said, "The BJP reposed faith in leadership of Devendra Fadnavis. Under his leadership party will work in opposition and participate in all legislative work. The party also conveys it's good wishes to Congress NCP and Shiv Sena which has come together to form government. The BJP also conveys it's good wishes to Sena president Uddhav Thackeray who has been appointed as CM candidate."

Mumbai: Meeting of BJP MLAs underway at the party's office.

Hours after he resigned as the deputy chief minister, NCP leader Ajit Pawar met party chief Sharad Pawar at his residence. The meeting comes ahead of floor test in the Maharashtra Assembly tomorrow. The Shiv Sena-NCP-Congress front will form government in the state after the BJP said it does not have the numbers. Sena's Uddhav Thackeray is set to become the chief minister.

NCP's Nawab Malik said  Uddhav Thackeray was unanimously elected as the leader and he will definitely be the CM. "He'll now go to Raj Bhavan and stake his claim to form govt. If governor accepts the claim, swearing-in ceremony will be held on December 1 at 5 pm at Shivaji Park."

Sanjay Raut, Shiv Sena, when asked if 'PM Modi will be invited for the swearing-in ceremony of Uddhav Thackeray as the Maharashtra CM': Yes we will invite everyone, we will even invite Amit Shah ji."

Sanjay Raut, Shiv Sena, when asked if 'PM Modi will be invited for the swearing-in ceremony of Uddhav Thackeray as the Maharashtra CM: Yes we will invite everyone, we will even invite Amit Shah ji. #Maharashtra pic.twitter.com/oxF6kUTLZA

People against whom we fought for 30 yrs kept trust on my leadership: Uddhav

"Not the people with whom we were there for 30 years but the people against whom we fought for 30 years kept trust on my leadership," said Uddhav. "Fadnavis's statement in today's press conference that nothing was decided about the CM post hurt me a lot," he added

Sharad Pawar said a delegation will go to Raj Bhavan to stake claim to form government after this meeting.

Swearing in of Uddhav Thackeray as CM on December: Sharad Pawar

The swearing in of Uddhav Thackeray as the chief minister of Maharashtra in Shivaji Park on December 1,  NCP chief Sharad Pawar announced

The MLAs passed a resolution appointing Uddhav Thackeray as the leader of the alliance and the Chief Ministerial nominee of the front. The resolution was mooted by NCP state president Jayant Patil and was seconded by State Congress President Balasaheb Thorat which was passed unanimously by all the assembled MLAs. A resolution to form the alliance 'Maha Vikas Aghadi' was also passed by the MLAs.

West Bengal Chief Minister Mamata Banerjee Tuesday welcomed the Supreme Court's decision on the developments in  Maharashtra and  said the SC upheld the spirit of the Constitution.  "This is a special news on Constitution Day," she said. Speaking about the formation of Fadnavis government on Saturday through overnight developments, Banerjee said, "Heard about freedom at midnight, never heard of government at midnight. Maharashtra has shown the way."

Sharad Pawar arrives at the venue of Sena-NCP-Cong meet

Shiv Sena-NCP-Congress meeting underway at Trident Hotel. Sharad Pawar arrives at the venue while his supporters raise slogans to welcome him.

Ruling in favour of the Sena-NCP-Congress combine, the top court ordered Maharashtra CM Devendra Fadnavis to face a floor test on Wednesday.  A three-judge bench headed by Justice NV Ramana and comprising Justices Sanjiv Khanna and Ashok Bhushan Tuesday said the floor test will be conducted through an open ballot and the proceeding will be recorded on video.

The bench also took note that one month had passed since the declaration of the Assembly elections results and no member had taken oath. It further directed the Governor to appoint a protem speaker who will administer oath to the newly elected members. The entire process must be concluded by 5 pm, the bench said.

The three-party combine last evening assembled its 162 MLAs under one roof at the Grand Hyatt Hotel to prove its strength to the BJP, where party leaders including — Uddhav Thackeray, Sharad Pawar and Babasaheb Thorat — addressed the MLAs who took an oath to remain honest to their parties and vouched to not indulge in anti-party activities.

Claiming that all their 162 MLAs stood together, NCP chief Sharad Pawar on Monday addressed its members' fear of disqualification from the Assembly stating that nephew Ajit neither has the power to issue party whip nor does he hold the right to suspend any NCP member, while Uddhav said the show of strength was for the country to witness their power in the state.