Maharashtra Government Formation highlights: Ahead of his meeting with the Congress president, Pawar said all the political parties seeking to stake claim in forming government in Maharashtra have to "choose their path."

Sharad Pawar informed the reporters that there was no discussion about common minimum programme (CMP) with Sonia Gandhi. The CMP was earlier drafted by the two parties in consultation with the Shiv Sena.

Maharashtra Government Formation: An hour after NCP chief Sharad Pawar met Congress supremo Sonia Gandhi at her residence, Shiv Sena leader Sanjay Raut reached Pawar’s residence Monday evening. After concluding his meeting with Pawar, Raut told mediapersons that he is confident that there will soon be a government in Maharashtra. “The responsibility to form Govt was not ours, the ones who had that responsibility ran away, but I am confident that soon we will have a Govt in place,” Raut told ANI.

Amid talks of government formation in Maharashtra, NCP chief Sharad Pawar met Congress supremo Sonia Gandhi at her residence in New Delhi. The two leaders will take a final call on joining hands with the Shiv Sena. The state is under President’s rule since the falling out of a pre-poll alliance between Sena and the BJP.

Ahead of his meeting with the Congress president, Pawar said all the political parties seeking to stake claim in forming government in Maharashtra have to “choose their path.” “BJP-Shiv Sena fought together, we (the NCP) and the Congress fought together. They have to choose their path and we will do our politics,” he told reporters before the Winter Session of Parliament began.

Former allies BJP and Shiv Sena locked horns over the seat-sharing formula and the post of chief minister in Maharashtra following the results of the Assembly elections on October 24.

Confident that soon we will have a govt in place: Sanjay Raut after meeting Pawar

Sanjay Raut,Shiv Sena after meeting NCP Chief Sharad Pawar: The responsibility to form Govt was not ours, the ones who had that responsibility ran away, but I am confident that soon we will have a Govt in place. #MaharashtraGovtFormation pic.twitter.com/79hXJifMNe

After a meeting that lasted for nearly 50 minutes with Congress president Sonia Gandhi at her 10, Janpath residence in New Delhi, NCP chief Sharad Pawar Monday said his party will hold talks with their allies in Maharashtra on government formation. Pawar told reporters that he had only briefed Gandhi about the political situation in Maharashtra and there was no discussion on government formation in the state. “We have discussed in detail the political situation in Maharashtra,” he said. READ MORE 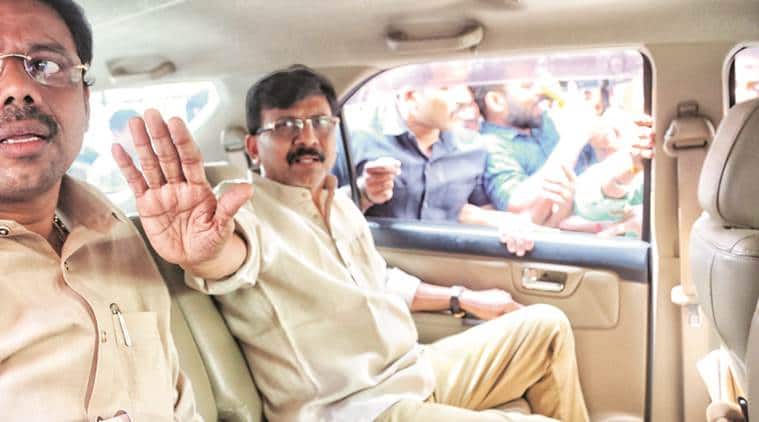 We did not discuss common minimum programme: Pawar

After meeting Congress chief Sonia Gandhi, Sharad Pawar informed reporters that he did not discuss the common minimum program (CMP) with her.  At NCP’s core committee meeting in Pune Sunday, party leader Nawab Malik said the  CMP, which was drafted by the two parties in consultation with the Shiv Sena, would certainly be part of the discussion, but “we believe government formation and future roadmap will be the crux of their discussion”.

'Representatives from NCP, Congress will meet to discuss the way forward'

Congress spokesperson Randeep Surjewala tweets about the Sonia-Pawar meeting. "Sharad Pawar met the Congress President today and briefed her on the situation in Maharashtra. It was decided that in a day or two, representatives from NCP & Congress will meet in Delhi to discuss the way forward," he says.

After meeting Sonia Gandhi at her residence, Sharad Pawar addresses mediapersons. He says that he discussed government formation deadlock in Maharashtra. 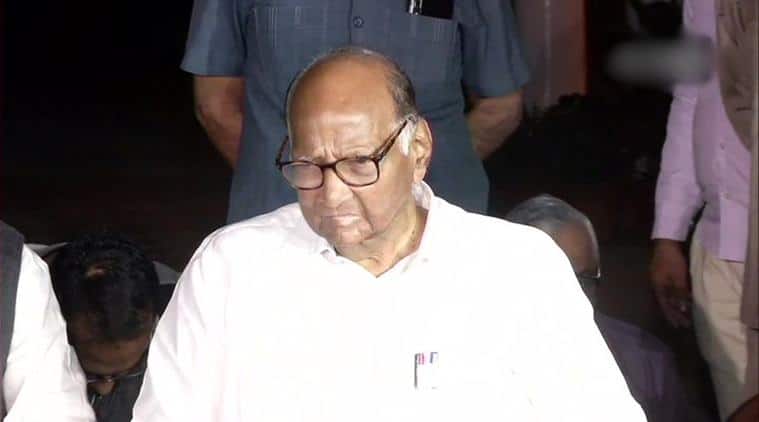 Meeting over, Pawar returns to his residence

The meeting between Sonia Gandhi and Sharad Pawar is concluded. Pawar returns to his residence after meeting Gandhi at 10, Janpath.

Union Minister Ramdas Athawale speaks on government formation in Maharashtra: "I had talked to Sanjay Raut ji about a compromise. I suggested him a formula of 3 years (CM from BJP) and 2 years (CM from Shiv Sena) to which he said that if BJP agrees then Shiv Sena can think about it. I will discuss this with BJP, " he says.

Sonia, Sharad to take a final call on joining hands with Shiv Sena

In the meeting between two bigwigs, a decision on the tri-party alliance between NCP, Congress and Shiv Sena is expected to be made. Maharashtra is presently under President's rule. (Express photo by Prem Nath Pandey)

The meeting between Nationalist Congress Party supremo Sharad Pawar and Congress acting President Sonia Gandhi is about to commence as the NCP chief has arrived at the latter's residence in New Delhi,

Explained: President’s Rule in Maharashtra, what next?

With the Assembly in suspended animation, it means the stakeholders — BJP, Shiv Sena, NCP and Congress — can approach the Governor any time with the required proof of support to prove majority on the floor of the House. The EC notification on the election will be treated as the new Assembly having been constituted. READ MORE

'We will do our politics': Sharad Pawar ahead of meeting with Sonia Gandhi

Ahead of his meeting with Congress president Sonia Gandhi, NCP chief Sharad Pawar said all the political parties seeking to stake claim in forming government in Maharashtra have to "choose their path".

The Shiv Sena on Monday took a swipe at its one-time ally, the BJP, over the "paltry" financial assistance announced by Maharashtra Governor Bhagat Singh Koshyari to the farmers affected by unseasonal rains.

In an editorial in the party mouthpiece "Saamana", the Sena said the BJP, which is in power at the Centre, left the affected farmers in the state "disappointed" with the "meagre" relief.

"Farmers in Maharashtra were expecting the governor would announce a major relief package for them. But the Rs 8,000 per hectare aid for kharif crops and Rs 12,000 for horticulture plantation is very less," the editorial said.

A day after the NCP core committee resolved to form an alternative government in Maharashtra, Shiv Sena chief Uddhav Thackeray has put off his November 24 visit to Ayodhya, a Sena leader said on Monday.

In the wake of the supreme court judgment on the Ramjanmabhoomi-Babri masjid land title dispute on November 9, Thackeray had announced he would visit the temple town in Uttar Pradesh on November 24.

"The government formation process is taking time. Leaders of the three parties (Sena, NCP and Congress) are holding meetings. They are inching towards government formation. In view of these developments, Uddhavji has decided to postpone his visit to Ayodhya," the Sena leader said. (PTI)

He also pointed out at the "security concerns" in Ayodhya. "Security agencies already denied permission to political parties planning to visit Ayodhya and the (Ram Janmabhoomi) site," the leader said.

THE BJP on Saturday directed its 59 losing candidates in the Assembly elections to return to their constituencies and prepare for the upcoming local bodies’ elections.

On the concluding day of the three-day meeting of party MLAs and leaders, former chief minister Devendra Fadnavis again reiterated that public mandate was in BJP’s favour and it would return to power.

Will do our own politics: Sharad Pawar on Maharashtra govt formation

NCP chief Sharad Pawar on government formation in Maharashtra:  "BJP-Shiv Sena fought together, we (NCP) and Congress fought together. They have to choose their path and we will do our politics."

Sharad Pawar, Nationalist Congress Party (NCP): BJP-Shiv Sena fought together, we (NCP) and Congress fought together. They have to choose their path and we will do our politics. #Maharashtra pic.twitter.com/8RmvFVVnPw

Parliamentary Affairs Minister Pralhad Joshi said Shiv Sena MPs would be allotted seats on the Opposition side in both houses of the Parliament. The Winter session of the Parliament begins from Monday.

Pralhad Joshi said the decision has been taken as the lone Sena minister had resigned and the party was “working out” alliance with the Congress and NCP to form government in Maharashtra.

Hitting out at the NCP and Congress which are trying to form a government in the state along with the Sena, the state BJP said that what the NCP-Congress was doing was political opportunism.

Amid talks of government formation in Maharashtra, the NCP on Sunday held its core committee meeting in Pune, which was presided over by party chief Sharad Pawar. Other leaders like state party chief Jayant Patil, Ajit Pawar, Dhananjay Munde, and MPs Supriya Sule and Sunil Tatkare were also present.

After the core meeting, NCP state chief Jayant Patil claimed that several BJP MLAs were in touch with the party. “Many BJP MLAs, especially those who had left NCP before the polls, are in touch with us. They want to return to the party,” he said.

Chavan also denied that the Congress was insisting on the deputy chief minister’s post. “We want to stop the BJP from coming to power. It has been practising vendetta politics, targeting Congress and NCP leaders and talking of finishing off the Congress. The party cannot remain a mere spectator. The BJP needs a befitting reply,” he said, adding that he was confident that a final decision will be taken this week.

0 Comment(s) *
* The moderation of comments is automated and not cleared manually by indianexpress.com.
Best of Express