Maharashtra govt formation Highlights: Government formation in Maharashtra gained momentum as Congress and NCP leaders assembled at Sharad Pawar’s Delhi residence to discuss seat-sharing in the state which is witnessing a power tussle. As soon as the meeting was over, leaders from both parties said they were confident of forming government in the state soon.

“Congress-NCP had long and positive discussions today. Discussions will continue; I am sure we will be able to give a stable govt to Maharashtra very soon,” Congress leader Prithviraj Chavan said whereas, NCP spokesperson Nawab Malik maintained that it was not possible to do so without joining hands with Shiv Sena.

Sena’s Sanjay Raut expressing confidence in Congress-NCP’s statements added that Maharashtra would get a government in the coming 2-5 days citing that “the process becomes longer when three parties form government”. He reiterated that as per people’s demands, Uddhav Thackeray must be given the post of Chief Minister.

The meeting took place hours after NCP Supremo Sharad Pawar met Prime Minister Narendra Modi today to apprise him regarding farmer distress in Maharashtra and demanded “unconditional and complete” farm loan waiver. Pawar presented a three-page memorandum to the prime minister regarding the unseasonal rainfall which destroyed the farm produce.

Maharashtra govt formation Highlights: Top Congress leaders met their NCP counterparts at Sharad Pawar's residence to take forward the discussions regarding an alliance in the state with the Shiv Sena.

Government will be formed in Maharashtra in 2-5 days: Sanjay Raut

On the CM-post, Raut maintained that it should be given to Shiv Sena which is the demand of the people of Maharashtra. "Yeh rajya ki bhavna hai ki Uddhav Thackeray Ji netritv karen. (It is the people's feeling that Uddhav Thackeray should become the Chief Minister)."

Not possible to form govt in Maha without NCP-Cong-Sena coming together: Nawab Malik

Indicating on joining hands with Shiv Sena, NCP spokesperson Nawab Malik after meeting Congress leaders at Pawar's residence expressed confidence in forming a "stable" government in Maharashtra. "Congress-NCP together decided that we must give an alternate government in Maharashtra. It is not possible without NCP-Congress-Shiv Sena coming together. We are trying our best to resolve all issues. We will provide alternate govt as soon as possible," he said.

Had positive discussion with NCP, will give Maharashtra stable govt soon: Prithviraj Chavan

After the Congress-NCP meeting, Prithiviraj Chavan exuded confidence in providing Maharashtra a stable government very soon. "Congress-NCP has had long and positive discussions today. Discussions will continue; I am sure we will be able to give a stable govt to Maharashtra very soon," Chavan was quoted as saying by ANI.

The meeting at Pawar’s residence saw NCP leaders Supriya Sule, Chaggan Bhujbal, Ajit Pawar, and Nawab Malik in attendance. Whereas, from the Congress side, Ahmed Patel, KC Venugopal, Prithviraj Chavan, Balasaheb Thorat, Jairam Ramesh, among others were present. Shiv Sena is in consultations with Congress-NCP to form government in the state.

Congress-NCP meet to begin soon at Pawar's residence in Delhi

During his meeting with PM Modi, Sharad Pawar also apprised him about a conference, 'Sustainability — Innovation and Diversification in Sugar and Allied Industry' to be organised by the Vasantdada Sugar Institute (VSI) from January 31 to February 2, 2020. He invited the PM to attend the conference. (PTI)

Expressing surprise, Shiv Sena's Sanjay Raut wrote a letter to Rajya Sabha Chairman M Venkaiah Naidu regarding the change in his seating position in the Upper House chamber. "Astonished to know that my seating position in RS chamber is changed from third to the fifth row. This decision was taken by someone deliberately to hurt Shiv Sena's sentiments and suppress our voice. I also fail to understand reason for this unwarranted step since there is no formal announcement about the removal from NDA. This decision has affected dignity of the House. I request to allot us 1/2/3 row seat and uphold House decorum." (ANI)

In a three-page memorandum, Sharad Pawar said in Nashik district crops like soyabean, paddy, finger millet, corns, bajra and vegetables like tomato and onion were at the harvesting stage but incessant and unseasonable rains completely ruined them. In the letter, he also said that 44 farmers from Nashik had committed suicide in the face of the crisis in the last 10 months.

Shiv Sena MLA Abdul Sattar said the party has called all MLAs for a meeting on November 22. "We have been asked to bring our ID cards and clothes for five days. I think we'll have to stay at a place for 2-3 days, then the next step will be decided. Uddhav Thackeray ji will be Maharashtra CM for sure," news agency ANI quoted him as saying.

Abdul Sattar, Shiv Sena: All MLAs have been called for a meeting on 22 Nov. We've been asked to bring our ID cards&clothes for 5 days. I think we'll have to stay at a place for 2-3 days, then the next step will be decided. Uddhav Thackeray ji will be Maharashtra CM for sure. pic.twitter.com/ZBa95Wbzow

Pawar writes to PM seeking aide for farmers in Maharashtra

"Due to the prevalence of Presidential Rule in the state, your urgent intervention is highly necessitated. I shall be grateful, if you take immediate steps to initiate massive relief measures&ameliorate the miseries of the distressed farmers," he said in the letter.

Met @PMOIndia Shri. Narendra Modi in Parliament today to discuss the issues of farmers in Maharashtra. This year the seasonal rainfall has created Havoc engulfing 325 talukas of Maharashtra causing heavy damage of crops over 54.22 lakh hectares of area. pic.twitter.com/90Nt7ZlWGs

Will uproot those who have challenged us: Shiv Sena

Days after BJP announced Shiv Sena’s ouster from the NDA, the latter on Tuesday came down heavily on its erstwhile ally, stating that this is the beginning of the end of BJP’s “egoistic and arbitrary politics”. The editorial in party mouthpiece Saamana also questioned the basis of the decision and whether any meeting of the NDA was held to take such a call.

“When the entire country was paying respects to Balasaheb (on his death anniversary), these people did the despicable act of ousting Sena, which laid the foundation of NDA. There was no discussion or message about it. The existence of the NDA has been systematically destroyed in the last five-and-a-half years. This is the beginning of the end of egoistic and arbitrary politics,” the editorial said.

Forthcoming Mayoral polls in Maharashtra might throw up some interesting scenarios in view of changing relations between traditional rivals Shiv Sena and the Congress-NCP combine who could team up to deny the BJP a chance to retain power in at least some civic bodies.

While in some municipal corporations, the Congress and the NCP may gain an upper-hand with the Sena's support, in others the BJP enjoys a clear majority. The mayoral elections will be held on November 22.

If all MPs meet PM, will it be a khichdi? Sena's Sanjay Raut on Pawar's meeting with Modi

Saying that PM Narendra Modi is the Prime Minister of the entire nation, Shiv Sena's Sanjay Raut said "anybody can meet the PM, inside or outside the Parliament." He was responding to a question of NCP chief Sharad Pawar's meeting with PM Modi on farmers' crisis in Maharashtra.

Sanjay Raut: If Uddhav Thackeray comes to Delhi regarding farmers issue, and all MPs meet PM 'toh kya khichdi pakt hai'? Be it inside the Parliament or outside it, anyone can meet the PM. Pawar sa'ab is very well known in agricultural arena, he knows the situation in the state. https://t.co/Z6KOilur8V

NCP chief and MP Sharad Pawar arrives at the Parliament. He will meet Prime Minister Narendra Modi at 12 pm today, over the issue of farmers' crisis in Maharashtra.

Delhi: NCP chief and MP Sharad Pawar arrives at the Parliament. He will meet Prime Minister Narendra Modi at 12 pm today, over the issue of Maharashtra farmers. pic.twitter.com/0mBGb8OS69

Addressing the House during a special discussion marking 250th session of the Rajya Sabha Monday, PM Modi had extolled the virtues of the Nationalist Congress Party (NCP) and the Biju Janata Dal for adhering to parliamentary norms by not entering the Well of the House.

“Today I want to appreciate two parties, NCP and BJD. These parties have strictly adhered to parliamentary norms. They have never gone into the well. Yet, they have raised their points very effectively. Other parties, including mine, can learn from them. People’s hearts can be won even without rushing to the Well,” PM Modi said.

Union Home Minister Amit Shah Wednesday will table a report in the Rajya Sabha on President rule imposed in the state and the invocation of Article 356 of the Constitution. He will also present the report submitted by Governor Bhagat Singh Koshyari to President Ram Nath Kovind. Koshyari had drawn fire from constitutional experts and political leaders, including those from Sena, NCP, and Congress, for recommending President rule in the state.

Govt will be formed in Maharashtra before December: Shiv Sena's Sanjay Raut

Amid  talks of government formation with Shiv Sena and the Congress in Maharashtra, NCP chief Sharad Pawar will meet Prime Minister Narendra Modi in Parliament at 12 pm today.

"Sharad Pawar will meet Prime Minister Narendra Modi today in Parliament, over the issue of Maharashtra farmers. We will demand some relief for the farmers, from the Prime Minister," NCP leader Nawab Malik was quoted as saying by news agency ANI. 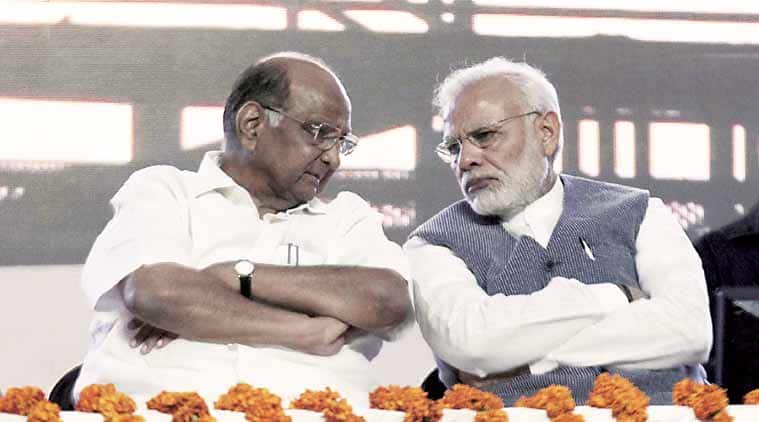 From being reluctant to engage with the politically opposed Sena, the top Congress leadership has taken a step forward towards formation of a government, but decided not to rush and exercise extreme caution.

A day after NCP chief Sharad Pawar met Congress president Sonia Gandhi, top Congress leaders — Ahmed Patel, A K Antony, Mallikarjun Kharge and K C Venugopal — tasked with working out the nitty gritty of the understanding with the Sena and negotiations with the NCP met her to discuss the “baseline non-negotiables” and “assurances” that it wants the Sena to give on shedding hardline Hindutva.

Several senior Congress leaders who The Indian Express spoke to said the party would tread cautiously. The common factor binding the top Congress leadership is its desire to deny the BJP a shot at power in Maharashtra. The Congress and the NCP, which fought the elections in alliance, will have to address various contradictions before plunging headlong into the alliance.