Maharashtra: Congress not on board yet as Governor invites NCP to form govt in Maharashtra

Meanwhile, Union Minister of Heavy Industries and Public Enterprises and Shiv Sena MP Arvind Sawant, meanwhile, on Monday resigned from the Narendra Modi-led Cabinet as the party prepared to stake claim in Maharashtra.

Hours after rejecting Shiv Sena’s demand to extend the deadline to form government in Maharashtra, Governor Bhagat Singh Koshyari Monday called NCP to stake claim at the government. NCP leader Nawab Malik told ANI that the party will hold discussions with ally Congress and see how a stable govt can be provided to the state.

The Congress said that it will hold further discussions with ally NCP on the political situation in Maharashtra on Tuesday. Follow highlights here.

. @aimim_national has 2 MLAs in Maharashtra & we will not be supporting the Shiv Sena-Congress government. A letter to the same effect will be sent to the Governor of Maharashtra briefly

"The Governor has, therefore, asked the leader of elected members of the third largest party, Nationalist Congress Party, Ajit Pawar, to convey its willingness and ability to form the government to him." (ANI)

BJP leader Sudhir Mungantiwar Monday said, "The BJP core team meeting has concluded. The political situation in the state was discussed in the meeting. On its basis, BJP is taking the stand of 'wait and watch'."

Called by Guv to form govt, will discuss it with Congress: NCP

NCP leader Nawab Malik on meeting with Governor: We have been called by the Governor, a delegation of our party is meeting him now. We've been called to form the govt. As per the letter given by the Governor we'll hold discussions with Congress and see how a stable govt can be provided to the state."

"We will get the letter today and make a final decision by tomorrow after holding discussions with our ally Congress," he added.

NCP has been given time till 8:30 pm Tuesday to prove majority in the state assembly.

Governor has called us to meet: NCP

Maharashtra Governor: "Delegation of Shiv Sena met the Governor and expressed willingness to form govt. However, they couldn't submit requisite letter of support. They submitted letter requesting three-day extension for submitting letters of support. The Governor expressed inability to give further extension."

No letter from Congress, NCP went to Governor: Manikrao Thackeray

Manikrao Thackeray, Congress: Neither ours nor NCP's letter has gone to Governor yet. It has been decided that two leaders will be sent for discussions with Pawar sa'ab (Sharad Pawar), state leaders will also be there. The next step will be taken after the discussion. (ANI) 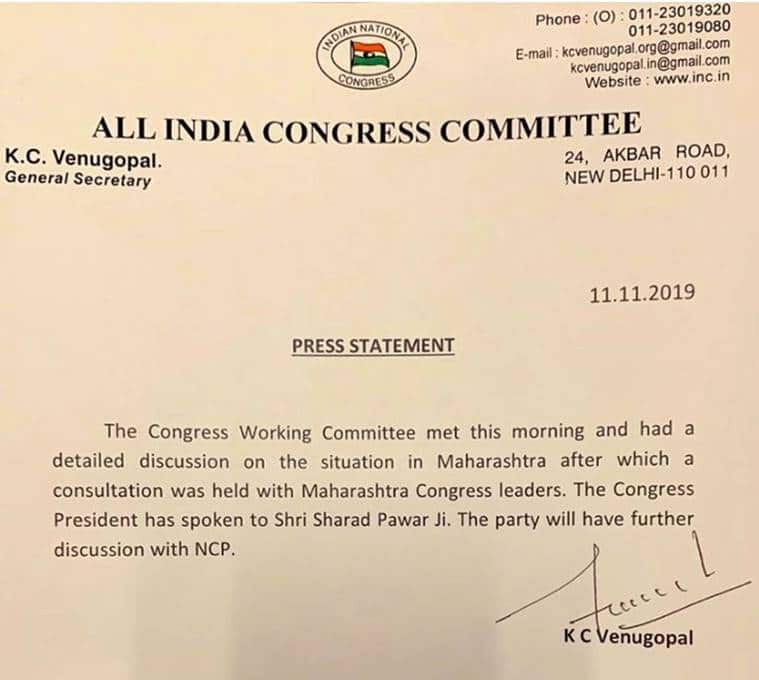 Willing to form a stable government in the state: Aaditya

Shiv Sena leader Aaditya Thackeray said that his party is willing to form a stable government in the state and is in touch with both NCP and Congress. "We had sought 48 hours extension but Governor rejected it. But, we have staked the claim for government formation and that is still there. The claim hasn't been rejected," said Aaditya. 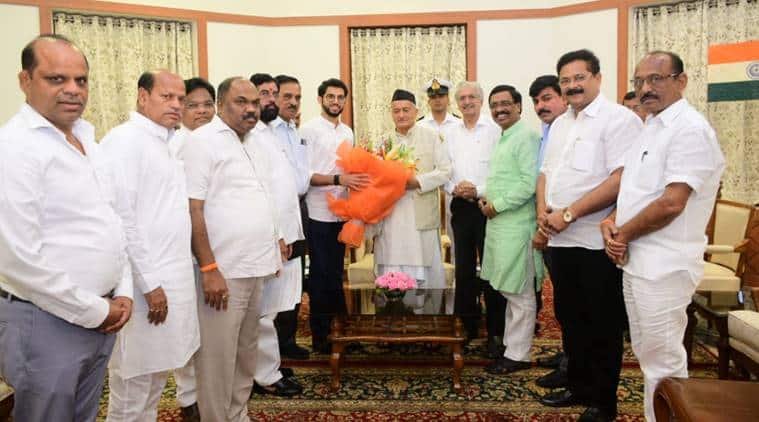 Shiv Sena leader Aaditya Thackeray and other leaders of the party reach Raj Bhavan, in Mumbai.

Senior Congress leader and its chairman of the screening committee for the Maharashtra elections, Jyotiraditya Scindia, on Monday said the neighbouring state must get a government soon to carry out people's works.

"It is important for the people of Maharashtra to have a government so as to carry out public works," Scindia said.

"I don't want to comment on this (Congress' role in government formation) as discussions are underway. The mandate was for the BJP-Shiv Sena but at the moment there is a strange situation," he added. (PTI)

Congress leaders AK Antony and Ahmed Patel arrive at 10 Janpath (Congress Interim President Sonia Gandhi's residence). Party's Maharashtra leaders have been called to Delhi for further discussions over the political situation in Maharashtra, the meeting to be held shortly. (ANI)

If Congress gives support to Shiv Sena, it should not disturb it for 5 years: Deve Gowda

Former prime minister and Janata Dal (Secular) chief H D Deve Gowda Monday said if Congress extends support to Shiv Sena to form government in Maharashtra, they should not disturb it for next five years, ANI reported. Incidentally, the JD(S)-Congress government in Karnataka had fallen apart earlier this year after a few MLAs defected to join BJP.

"Balasaheb gave place to BJP in Maharashtra, Advani&Vajpayee went to Bala Saheb's residence and requested him for seats. BJP overrode that, that's why Uddhav Thackeray has taken a stand that he will teach them a lesson. Now, it's for Congress&NCP to put down BJP," he added.

Union Minister of Heavy Industries and Public Enterprises and Shiv Sena MP Arvind Sawant, meanwhile, on Monday resigned from the Narendra Modi-led Cabinet as the party prepared to stake claim in Maharashtra. "In such an environment, it is not right for me to continue," he told reporters in Delhi.

The invitation to the Sena, the second largest party in the Assembly, came after BJP leaders led by caretaker Chief Minister Devendra Fadnavis met the Governor at 5.30 pm and and turned down his invitation citing the lack of numbers.

The Sena, the BJP’s pre-poll ally, has refused to budge from its demand for a half-share of the Chief Minister’s post, and has been exploring other options to form the government.

Sources said that Shiv Sena MP Sanjay Raut was likely to leave for Delhi to meet with Congress leaders. Sources in the Sena said that party chief Uddhav Thackeray was likely to be nominated chief minister. On Sunday, there were posters outside his home Matoshree saying: “It is the need of Maharashtra that Shiv Sena Chief Uddhav Thackeray should become Chief Minister.”