Cong, Sena have different ideologies but we will work together, says Uddhav

Maharashtra Government Formation: Shiv Sena filed a petition in the Supreme Court against the Governor for refusing to give an extension of time.

The NCP and Congress in a meeting earlier today. (Express photo)

Maharashtra Government Formation: President Ramnath Kovind Tuesday gave assent to the imposition of President’s rule in Maharashtra. Earlier today, Governor Bhagat Singh Koshyari had submitted a report to the President recommending President’s rule in the state saying he is not satisfied that any party or coalition would be able to form a stable government.

On the other hand, the Shiv Sena moved the Supreme Court against the Governor for not granting an extension of three days to the party to get letters of support from NCP and Congress. Meanwhile, three senior Congress leaders including — Ahmed Patel, Mallikarjun Kharge and K C Venugopal — have reached Mumbai to hold discussions with Pawar.

Earlier, BJP, which emerged as the single-largest party with 105 seats post the October 24-Assembly elections verdict, did not stake claim after ally Sena denied support. Sena, with 56 seats in its kitty, was invited next by the Governor. The party has now adopted a wait and watch policy.

The imposition of President’s rule in Maharashtra was an unfortunate development, former chief minister Devendra Fadnavis said on Tuesday. In a statement issued late evening, Fadnavis said: “In the 2019 Assembly Elections, people gave a clear mandate to the Mahayuti, comprising BJP, Shiv Sena, Rashtirya Samaj Party, Republican Party of India, Ryat Kranti and Shiv Sangram. Despite the mandate, a government could not be formed. The political developments led to President’s rule, which is unfortunate.”

"President's rule is definitely something we did not expect. We will certainly try to ensure that people's mandate is respected. We will try to form a stable government. We will stand by the people of the state," he said.

Keeping the doors open for reconciliation, Shiv Sena chief Uddhav Thackeray Tuesday refused to say his party has severed all ties with its pre-poll ally. When asked by a reporter “is the BJP option completely finished”, Thackeray said:”Why are you in such a hurry? It’s politics. President has given us six months time.”

Thackeray, however, blamed the BJP for refusing to form government with the Sena.

Shiv Sena chief Uddhav Thackeray in a presser said even though Congress, NCP and Sena share different ideologies, they will find a way to work together. On the imposition of the President's rule, Uddhav said, "We asked for 48 hours, the President has given us six months."

"Yesterday we formally requested Congress-NCP for their support to form the government. We needed 48 hours, but the Governor didn't give us time," the Sena president said.

Senior Congress leader Ahmed Patel, among the three who flew down to Mumbai today, criticised the Centre's decision to impose the President's rule and questioned why Congress was not invited to form a government. "They don't follow rules," Patel said.

In a joint press conference, Congress and NCP said both parties met and have drafted a joint letter. Concluding the two and half hour meeting, the parties said they will discuss future strategy.

"The first formal proposal by the Sena was made to the congress and NCP on November 11. Before taking a decision on such an important matter we need to have a consultation with each other. A decision on talks with Sena will be taken once we have talks between ourselves," Patel said.

"We have fought elections together and we need to consult with our ally only then can we talk with the Sena," Sharad Pawar said.

In connection with Shiv Sena moving the Supreme Court against the Governor's refusal to grant an extension of time to get letters of support from NCP and Congress, the top court will not hear the matter today as learnt by The Indian Express.

The top court has asked the Counsel for the petitioner to mention the matter on Wednesday before the court.

Sena had filed the petition in the apex court for an urgent hearing. After the imposition of President's rule in Maharashtra, the Ministry of Home Affairs (MHA) claimed the state legislature is in suspended animation.

"Governor told the President that he has made all efforts to get a government made in the state but he could not see any possibility of a government forming. So he wrote to the president for president rule," the Ministry said.

President Ramnath Kovind has given consent to the President's rule in Maharashtra by signing the notification.

Shiv Sena chief Uddhav Thackeray, son Aditya Thackeray and party leaders are on their way to Hotel Retreat Malad where Sena MLAs have been lodged for five days.

The Shiv Sena, last week, herded all its legislators into Rang Sharda, a three-star hotel in suburban Mumbai, less than four kilometres from the party headquarters, while Congress MLAs are lodged in a hotel at Jaipur.

NCP spokesperson Nawab Malik had told reporters, "The party believes that it is not possible to form an alternative govt without the coming together of the three parties (Congress, NCP, Shiv Sena). If the three don't come together, there cannot be a stable govt in Maharashtra."

The BJP is set to hold it's meeting at 6 pm today.

Governor Koshyari has submitted a report to President Ram Nath Kovind recommending President's rule in the state. In the report, Governor stated that he is satisfied that the State of Maharashtra cannot be carried out in accordance with the Constitution.

The Shiv Sena has moved the Supreme Court against the Maharashtra Governor's refusal to grant three days to get the letters of support from the NCP and Congress.

The petition filed by Sena says that the Governor's move is against the principles of natural justice, sources say. It further says, it had the support of two other parties and needed three days to show numbers.

Appearing for the Sena is Senior Advocate Kapil Sibal.

After a day-long discussion with its Maharashtra leadership on Monday, the Congress did not give the waiting Sena a letter of support, forcing Aaditya Thackeray and Eknath Shinde to meet Governor Bhagat Singh Koshyari with empty hands and seeking more time. a request Raj Bhavan didn’t accept.

The reluctance of the Congress to enter into an alliance with the Shiv Sena was stated to be one of the reasons that the Congress and NCP failed to give the Sena letters of support within the deadline. “Congress was not comfortable with the Sena’s stand on Ram temple construction and Uniform Civil Code,” said a Sena functionary. 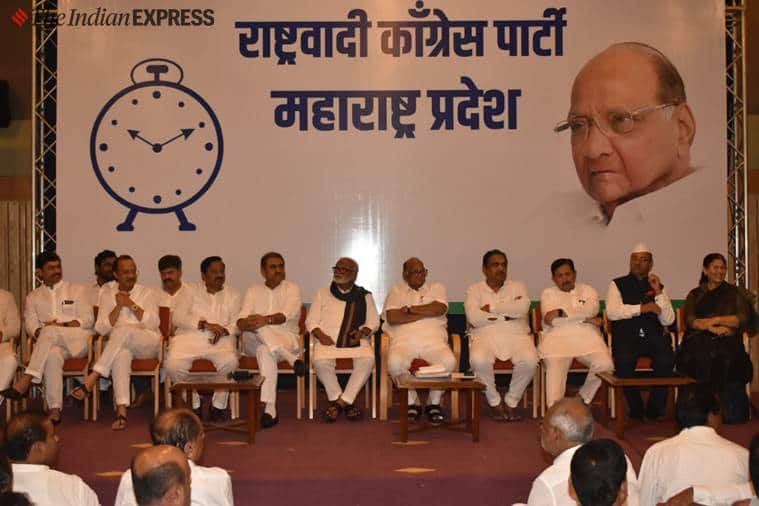 Guv has given time till 8.30 pm today to stake claim: NCP

NCP spokesperson Nawab Malik said party legislators passed a resolution after their meeting that Sharad Pawar will have the power to take decisions on behalf of the party.

"The party believes that it is not possible to form an alternative govt without the coming together of the three parties (Congress, NCP, Shiv Sena). If the three don't come together, there cannot be a stable govt in Maharashtra," Malik told reporters.

Malik said the Governor had called the NCP on Monday to stake a claim and has given time till today till 8.30 pm.

He said, Pawar will be meeting senior Congress leaders at 5 pm today, who are flying down from Delhi including Ahmed Patel, Mallikarjun Kharge and KC Venugopal. " The government in Maharashtra can be formed only if three parties come together," Malik said.

Congress shows its willingness to ally with Shiv Sena

Congress has shown its willingness to ally with the Shiv Sena. Party leader Manikrao Thakre has said that there will be a discussion between Congress, NCP, and Shiv Sena in the coming days. He also said that modalities of a common minimum programme would be worked out between the three soon.

The Union cabinet meeting is happening hours before Prime Minister Narendra Modi will leave for Brazil to attend the 11th BRICS summit, the theme of which is “economic growth for an innovative future”. This comes hours before the ending of the deadline given to the NCP to stake a claim.

President's rule likely to be imposed in Maharashtra

Maharashtra Governor Bhagat Singh Koshyari has recommended imposition of President's rule in the state, Raj Bhavan sources. On Monday, Governor had asked Sharad Pawar-led whether it can form the government and had given time today 8.30 pm. NCP leaders had apparently told the Governor that the time was too less to stake claim.

The Sharad Pawar-led NCP was called to form the government Monday, after the BJP expressed its unwillingness to form government, and then the Shiv Sena, which was invited next and given 23 hours to prove its intent, could not show support for its claim within the stipulated time. Leader of NCP’s legislative wing, Ajit Pawar, was called by the Governor’s office to meet Koshyari where the formal proposal was handed over to a delegation of party leaders.

The NCP has 54 seats in the state Assembly, while its ally Congress has 44 seats. The alliance is short of 47 seats in the Assembly to cross the half-way mark and prove its majority. The party would need the support of Shiv Sena, which has 56 seats, for it to have any realistic chance of forming the government.

While NCP supremo Sharad Pawar’s impressive election campaign had set the stage for NCP’s resurgence in Maharashtra, there has been a vocal section of senior party leaders that believe that returning to power in the state was essential for the party to rebuild and keep its flock together. Senior leaders of the party will meet in Mumbai Tuesday morning to review the evolving political situation yet again.

Meanwhile, at the BJP core committee meeting, leaders discussed the political possibilities of NCP-Congress joining hands with Sena despite their ideological differences, and if so, what the BJP’s own role should be as an “aggressive” opposition in the state legislative assembly.

Sena-NCP tie-up — Not the first time