Maharashtra Government Formation HIGHLIGHTS: Shiv Sena chief Uddhav Thackeray Wednesday invited Prime Minister Narendra Modi to be a part of his oathtaking ceremony as the new chief minister of Maharashtra on Thursday. The new Maharashtra government will have only one deputy chief minister from NCP and the Speaker will be from the Congress, while his deputy will be from the NCP, party leader Praful Patel said Thursday after NCP-Congress-Shiv Sena MLAs meeting. Meanwhile, former chief minister Devendra Fadnavis has been elected as the Leader of the Opposition by the BJP.

Earlier in the day, Maharashtra CM-designate Uddhav Thackeray and wife Rashmi Thackeray met Governor Bhagat Singh Koshyari at Raj Bhavan. Meanwhile, NCP leader Ajit Pawar, whose brief support to the BJP ruffled quite a few feathers in the new three-party coalition, today said joining hands with the BJP wasn’t a revolt and that he was, is and will always be in the NCP.

A special session of the state Assembly was convened to administer oath to members in the 288-member House by pro-tem Speaker Kalidas Kolambkar. NCP leader Ajit Pawar was greeted with thumping of desks by NCP members when he went to the podium to take oath. Ahead of the special session, Pawar greeted cousin Supriya Sule with a hug outside the Assembly.

On Tuesday, Devendra Fadnavis tendered his resignation — the shortest tenure of a government in Maharashtra — following the Supreme Court’s order for a floor test. Fadnavis’ resignation is not just the loss of power in the country’s financial hub, but a second misadventure for the BJP within 18 months. This will hurt the party brass more than the fall of the earlier Karnataka government because this time the offices of the President and PM were dragged in to impose President’s Rule and to revoke it later.

After Fadnavis resigned as Maharashtra CM, Shiv Sena's Uddhav Thackeray is set to lead the state. A special session of Assembly was convened to administer the oath to the MLAs today. Here are the HIGHLIGHTS.

Shiv Sena chief Uddhav Thackeray Wednesday invited Prime Minister Narendra Modi to be a part of his oathtaking ceremony as the new chief minister of Maharashtra on Thursday. 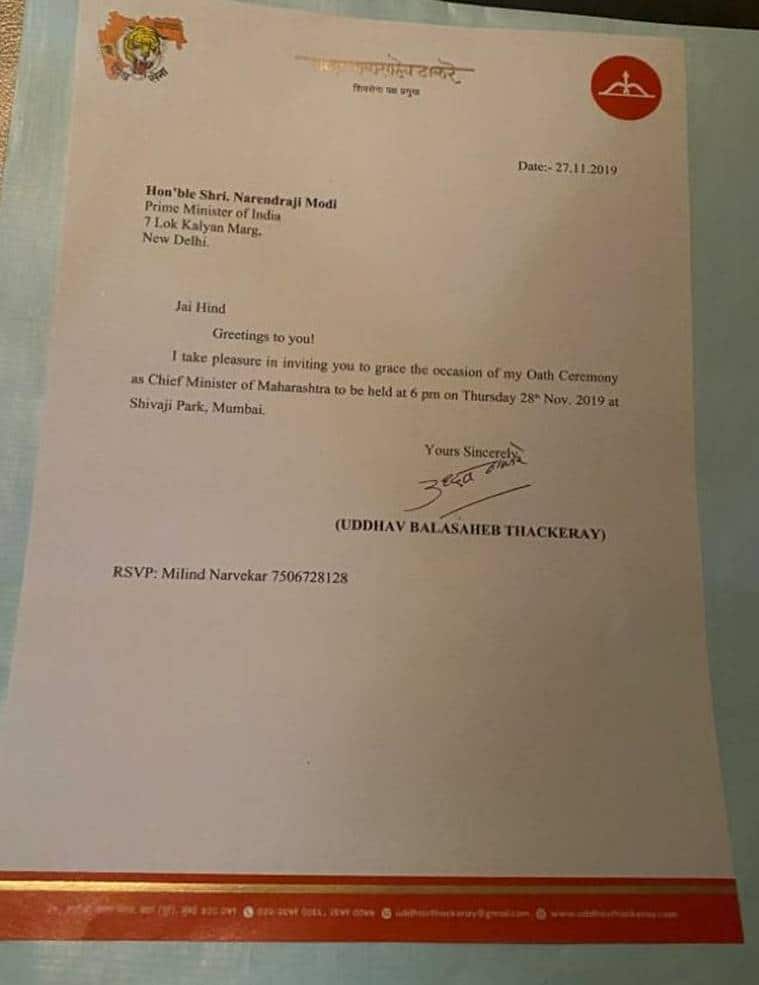 New Maharashtra govt to have one Deputy CM from NCP

Praful Patel, NCP after attending a meeting of NCP-Congress-Shiv Sena MLAs in Mumbai: There will be only one Deputy Chief Minister and that will be from NCP.

"How many ministers will take oath will be decided tonight. 1 or 2 MLAs from each party will take oath as ministers. Speaker has been decided by all three parties, Speaker will be from Congress and Deputy Speaker from NCP," news agency ANI quoted him as saying

Shiv Sena leader Aaditya Thackeray has arrived at the residence of Congress president Sonia Gandhi to invite her for the swearing-in ceremony of Uddhav Thackeray as the chief minister tomorrow.

Shiv Sena leader Aaditya Thackeray will be in Delhi tonight to invite Congress interim president Sonia Gandhi for the swearing-in ceremony of Uddhav Thackeray as the Chief Minister of Maharashtra, tomorrow

Uddhav Thackeray, 59, will be 18th CM of Maharashtra

Shiv Sena president Uddhav Thackeray will take oath as the 18th chief minister of Maharashtra on Thursday. Thackeray, 59, will be the third Sena leader after Manohar Joshi and Narayan Rane to occupy the top post.

Explained: What is Shivaji Park, and why is it important for the Shiv Sena?

On Thursday (November 28) evening, Shiv Sena chief Uddhav Thackeray will take oath as the new Chief Minister of Maharashtra, heading a government of the Maha Vikas Aghadi that will also include the Nationalist Congress Party and the Congress.

The ceremony will take place at the historic Shivaji Park maidan, a 28-acre open space in the Marathi-dominated Dadar neighbourhood of central Mumbai. Shivaji Park is a prized bastion of the Shiv Sena, and holds immense emotional value for the party. READ MORE HERE

Poster of Ajit Pawar put up in Baramati by Nationalist Congress Party (NCP) workers. Poster states "...let us decide now what you should or should not do. Whole Maharashtra is looking towards you as a future Chief Minister".

Maharashtra: Poster of Ajit Pawar put up in Baramati by Nationalist Congress Party (NCP) workers. Poster states "...let us decide now what you should or should not do. Whole Maharashtra is looking towards you as a future Chief Minister". pic.twitter.com/zc46JQ7Pwy

The CPI(M) on Wednesday said it will not oppose formation of the new Maharashtra Vikas Aghadi (MVA) government of the Shiv Sena, the NCP and the Congress to ensure that the BJP does not return to power.

The party also demanded sacking of Maharashtra Governor Bhagat Singh Koshyari for playing a "partisan role at the behest of the Prime Minister and the Home Minister".

The CPI(M) issued a statement on Wednesday, a day after the four-day-old BJP government of Devendra Fadnavis supported by NCP's Ajit Pawar collapsed due to lack of majority in House. The party has one MLA in the 288-member Legislative Assembly.

"To ensure that the BJP does not return to power, the CPI (M) has decided that it will not oppose the formation of the new Maharashtra Vikas Aghadi government," it stated.
(PTI)

Not a revolt: Ajit Pawar on supporting BJP

Back in the NCP fold, party leader Ajit Pawar said him supporting the short-lived BJP government was not a "revolt". "Did NCP remove me? Did you read about my removal from NCP?" news agency PTI quoted him as saying. Although Pawar was removed as the NCP legislative leader on his supporting the BJP, his party membership was not revoked.

Will speak about Ajit Pawar's support at right time: Fadnavis

Maharashtra caretaker Chief Minister Devendra Fadnavis on Wednesday said he will speak at the "right time" about the support extended by NCP leader Ajit Pawar to the BJP in forming the government last week, which collapsed on Tuesday.

"I will speak about it at the right time," Fadnavis said when asked by reporters on the Vidhan Bhavan premises about the support extended by Ajit Pawar to the BJP in forming a government on November 23.

The BJP formed government on November 23 morning after Ajit Pawar broke ranks with the NCP and aligned with the saffron party. Fadnavis and Ajit Pawar then took oath as CM and deputy CM, respectively. The four-day-old government, however, collapsed on Tuesday, after Ajit Pawar resigned citing "personal reasons".
Fadnavis also stepped down.

CM-designate Uddhav Thackeray has arrived at YB Chavan centre, in Mumbai for the meeting of Congress, NCP and Shiv Sena MLAs. He will take oath as the Chief Minister of the state tomorrow.

Maharashtra: CM-designate Uddhav Thackeray arrives at YB Chavan centre, in Mumbai for the meeting of Congress, NCP and Shiv Sena MLAs. He will take oath as the Chief Minister of the state tomorrow. pic.twitter.com/iMo51dSgFj

Parties with opposite ideologies joined hands for power: Amit Shah on Maharashtra

Speaking in the Lok Sabha during the ongoing Winter session of the Parliament, Home Minister Amit Shah Wednesday hit out at the Shiv Sena-NCP-Congress alliance in Maharashtra, saying "parties with opposite ideologies have joined hands only to grab power."

In Pics | All smiles in NCP, Sena camp as MLAs take oath

A special session of the 14thMaharashtra Legislative Assembly commenced to administer oath to the newly-elected members. MORE  PHOTOS HERE 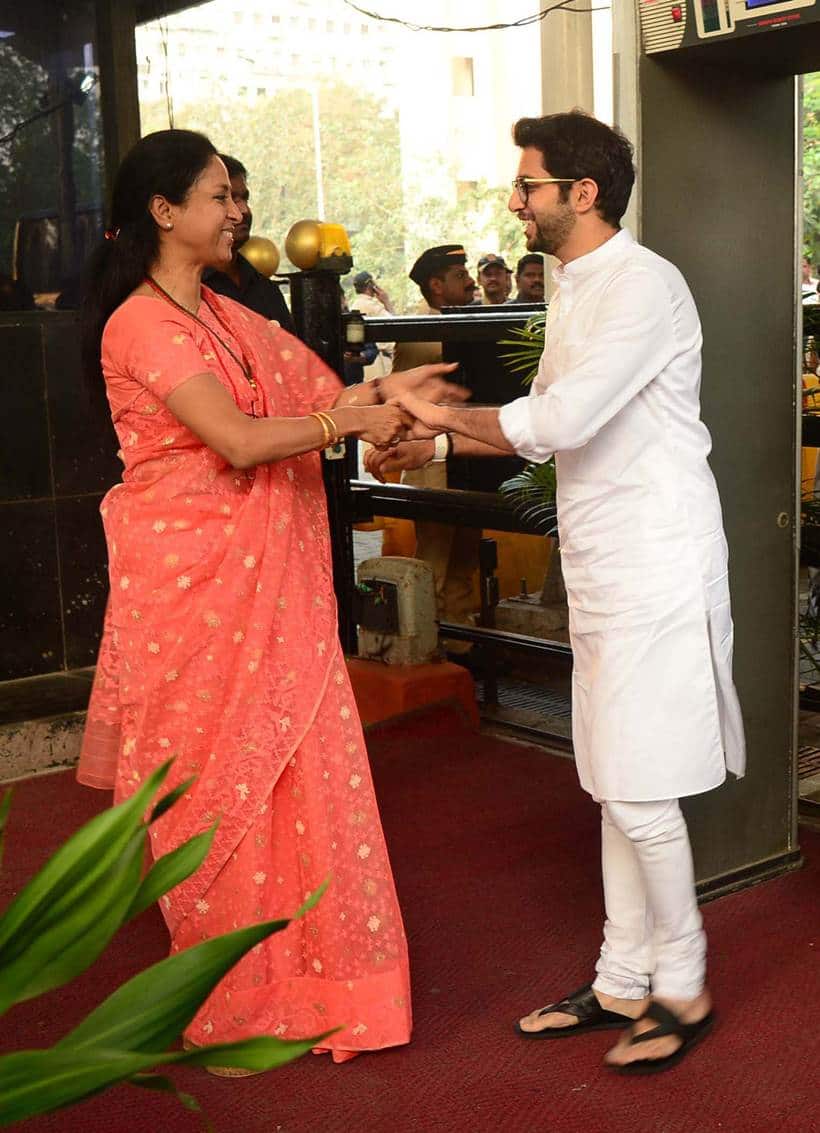 NCP's Chhagan Bhujbal shows victory sign after being sworn in as MLA at Maharashtra Vidhan Bhawan, in Mumbai (Express Photo By Ganesh Shirsekar) 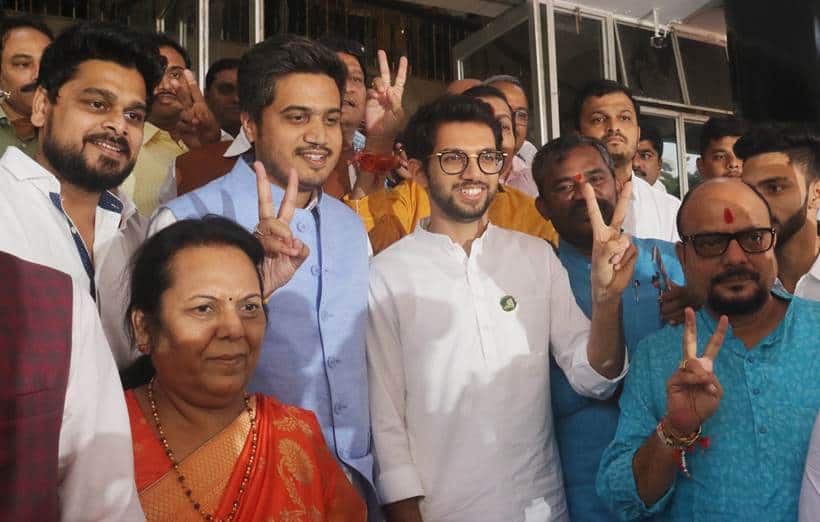 Back in fold, Ajit Pawar attends a meeting of NCP MLAs in Mumbai.

The curtains to the political drama in Maharashtra were drawn after the Supreme Court ordered an "immediate" floor test to be telecast live on Wednesday. The court also said that a pro-term Speaker was to be appointed and that no open ballot would be allowed.

This changed things for the BJP. From the very beginning, the BJP, sources said, had been banking on “technicalities” to win the trust vote. The plan was to convene a three-day assembly session. The first day would have been devoted to oath being administered to the MLAs by the Pro-tem Speaker. Sources said hopes were being pinned on the appointment of the Speaker, secret ballot and a voice vote.

All those hopes were dashed Tuesday when the Supreme Court ruled out the secret ballot. NCP's Ajit Pawar, who made a dramatic switch to ally with the BJP and on whose support the saffron party was banking, also resigned as the deputy CM. This sealed the fate of the Fadnavis government. Prime Minister Narendra Modi and Home Minister Amit Shah, the two top leaders of the BJP, had met right after the Supreme Court verdict.

Running out of options and facing defeat in the trust vote after NCP leader Ajit Pawar resigned as Deputy Chief Minister due to "personal reasons", Fadnavis too threw in the towel, saying he no longer had the majority.

Before handing over his resignation to Governor Bhagat Singh Koshyari, Fadnavis in a presser said the party doesn't have numbers and that it doesn't want to indulge in horse-trading.

After the fall of Fadnavis government, Uddhav Thackeray met the Governor and staked claim. Thackeray, on his part, thanked Congress chief Sonia Gandhi, her party and the NCP while taking a swipe at the BJP. “I feel regret and surprise about one thing — the people with whom we had allied for 30 years didn’t trust me, but the people against whom we fought for 30 years showed trust in my leadership. I have learnt today what I gained and what I lost.”

In the Maharashtra House of 288 members, the BJP has 105, Shiv Sena 56, NCP 54 and Congress 44 MLAs. The Sena parted ways with the BJP after insisting on the rotation of the CM post.