Maharashtra girl gets arms of Kerala man killed in accident

In September 2016, Shreya had met with a bus accident while she was returning to the Manipal Institute of Technology, Karnataka, from her home in Pune. The accident forced her to undergo amputation. 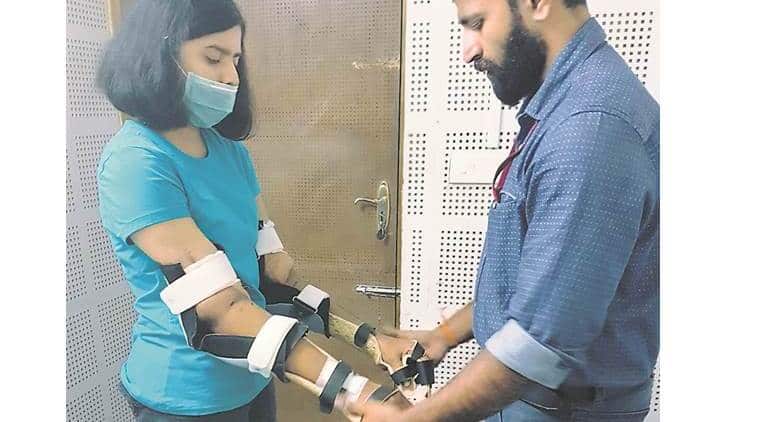 Shreya’s family hopes that she will be able to attend college in a year. (Express photo)

In the first upper arm transplant in Asia, a male hand has been transplanted onto a 19-year-old girl, but for the Pune-based Siddanagowders, that was never a concern. “We feel it’s a miracle that we got a donor the day we reached Kochi and registered our daughter,” says father F B Siddanagowder, senior manager at Tata Motors. The family hopes that in a year Shreya will be able to go back to college to complete her graduation.

On August 9, Shreya, a BTech student, underwent upper arm double hand transplant, after the family of 20-year-old Sachin, a BCom student from Ernakulam’s Rajagiri College, Kerala, agreed to donate his organs, including both hands, following his death due to a bike accident.

“When you don’t have hands for so long and you suddenly get a new pair of hands, the weight is too much to bear at first… But this is the happiest I have ever been,” Shreya says. Seven weeks after the transplant, on Thursday, she says it has been exactly a year when she met with an accident in which she lost both her hands.

In September 2016, Shreya had met with a bus accident while she was returning to the Manipal Institute of Technology, Karnataka, from her home in Pune. The accident forced her to undergo amputation. She was using prosthetic limbs but had to quit college.

“We went and met the family of the boy to thank them. The mother was still grieving but the family took the decision to donate his organs for their son’s sake,” Siddanagowder said.

A group of 20 surgeons and a 16-member anaesthetic team at Kochi’s Amrita Institute of Medical Sciences conducted the transplant in 13 hours. “Upper arm transplants are more challenging than those at the wrist due to the complexity involved in accurately identifying and connecting various nerves, muscles, tendons and arteries,” said Dr Subramania Iyer, head of plastic and reconstructive surgery.

The family of three has moved to Kochi to live in a rented house for at least a year-and-a-half for Shreya to undergo her rehabilitation therapy. Plastic surgeon Dr Mohit Sharma says, “We expect that she will regain 85 per cent of hand function in the next one-and-a-half years,” he said.

If govt can’t protect (me), other intellectuals not safe in country: Kancha Ilaiah Shepherd