A delegation of the protesting tribals met Fadnavis at Vidhan Bhawan in south Mumbai, where the winter session of the state legislature is underway. Tribal welfare ministerVishnu Savra said 3.6 lakh claims were received, of which 1.74 lakh have been settled in favour of the tribals.

Maharashtra farmers’ protest HIGHLIGHTS:  Maharashtra Chief Minister Devendra Fadnavis Thursday assured tribal farmers that their forest land rights claims will be settled by December this year. A delegation of the protesting tribals met Fadnavis at Vidhan Bhawan in south Mumbai, where the winter session of the state legislature is underway. Tribal welfare ministerVishnu Savra said 3.6 lakh claims were received, of which 1.74 lakh have been settled in favour of the tribals.

Thousands of farmers and tribals had arrived at the Maharashtra Legislative Assembly in Mumbai to protest various agrarian issues plaguing the state.  About 7,000 farmers, led by the Lok Sangharsh Morcha, commenced their march from Mulund Octroi Naka on Wednesday morning. Several political parties have lent their support to the protest, including Janata Dal (Secular), Aam Aadmi Party (AAP) and Shiv Sena. Water conservationist Dr Rajendra Singh and MP Raju Shetty have also come out in support.

Some of the demands include the implementation of Swaminathan Committee Report, pending claims under the Forest Rights Act (FRA), minimum support price and setting up of a judicial system to ensure its implementation, complete farm loan waiver and drought compensation of Rs 50,000 per acre for non-irrigated land and Rs 1 lakh per acre for irrigated land and other issues.

Maharashtra Chief Minister Devendra Fadnavis Thursday assured tribal farmers that their forest land rights claims will be settled by December this year. Fadnavis gave this assurance to representatives of protesting farmers who marched to Azad Maidan here for redressal of their grievances, which include compensation for drought and transfer of forest rights to tribals.

'We are forced to launch this agitation,' says Pratibha Shinde, general secretary of Lok Sangharsh Morcha

"We have been consistently asking the state government to fulfil our long-standing demands, but the response has been lukewarm. We are forced to launch this agitation," said Pratibha Shinde, general secretary of Lok Sangharsh Morcha, which is organising the protest. (PTI) The farmers are demanding implementation of the Swaminathan Committee report, which suggested that farmers must have assured access and control over resources such as land and water. They are also demanding an increase in the minimum support price and a judicial system to ensure its implementation. Delegation of farmers outside Vidhansabha 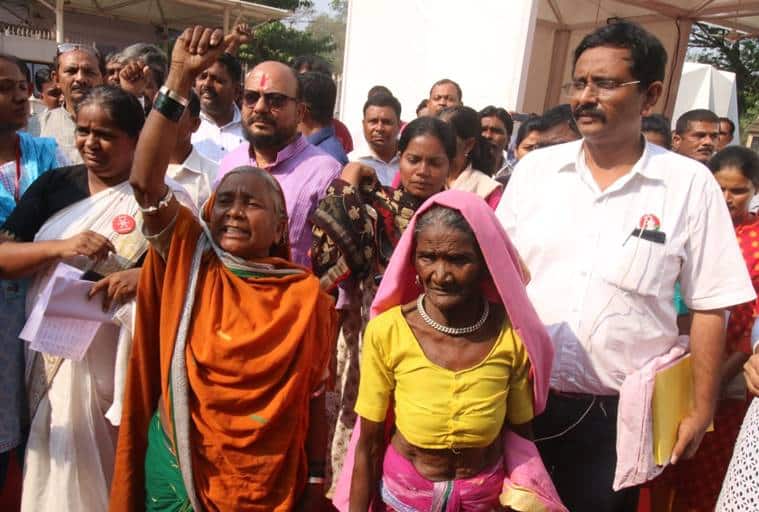 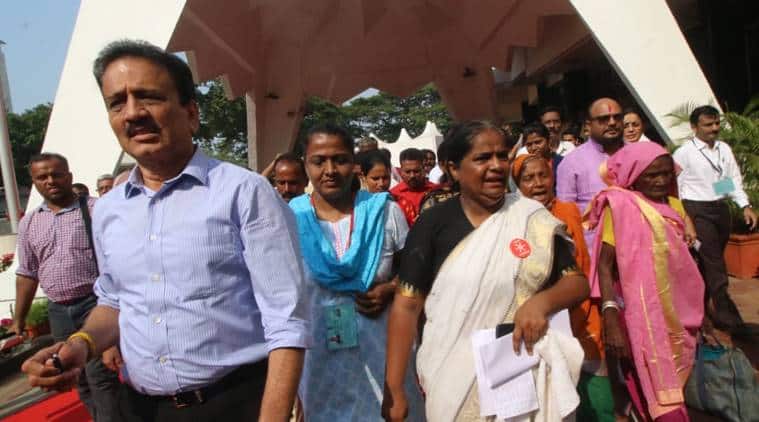 Threatening to not leave the grounds till their demands are met, Lok Sangharsh Morcha general secretary Pratibha Shinde said, "We will not leave Azad Maidan until our demands are met. We will decide our further course of action after meeting the chief minister."

Those protesting outside the Assembly are Minister for Water Resources Girish Mahajan, Conress and leader of opposition Radhakrishna Vikhe Patil and Samajwadi Party leader Abu Azami.

A delegation of farmers will meet Chief Minister Devendra Fadnavis at 1.30 pm this afternoon.

Farmers to protest near Vidhan Bhawan

Protesters are expected to reach Azad Maidan in south Mumbai by noon following which they will hold a demonstration near Vidhan Bhawan, where the state legislature session is underway. The participants are mostly from Thane, Bhusawal and Marathwada regions, he said.

Over 7,000 farmers and tribals from across Maharashtra are marching towards Azad Maidan in Mumbai in protest of various agrarian issues in the state. Click here to see photos.

Commuters starting journey from South Mumbai using JJ flyover, Lalbagh flyover and Parel flyover towards Dadar are advised to avoid & use Slip Roads till 10 AM. Farmer’s agitation scheduled today.
Regular Traffic movement on Dr BA Road towards CST and on these flyovers.

The Lok Sangharsh Morcha arrived in Dadar on Monday morning. The Morcha, that began from Kalyan yesterday, is marching towards Azad Maidan in Mumbai. The farmers are demanding loan waiver and drought compensation among others.

Maharashtra: Lok Sangharsh Morcha that comprises of tribals and farmers across the state reaches Dadar. The Morcha that has begun from Kalyan yesterday is marching towards Azad Maidan in Mumbai. The farmers are demanding loan waiver and drought compensation among others. pic.twitter.com/K6c3RHp4jb

In pictures: Thousands of farmers protest from Thane to Mumbai 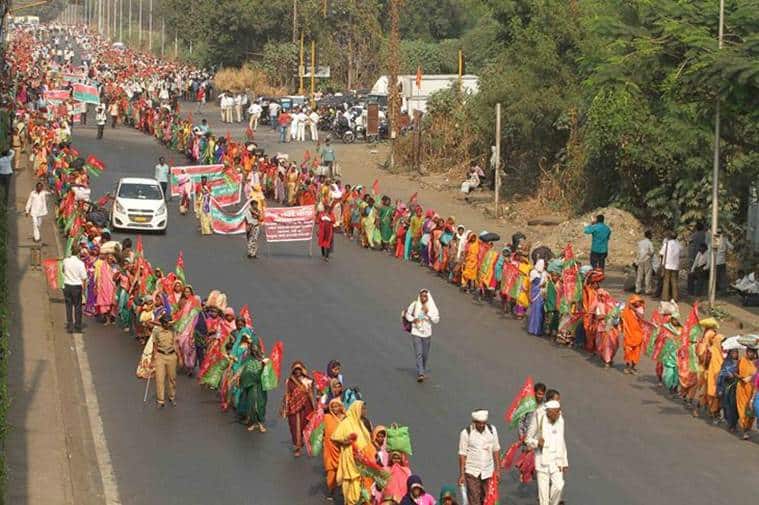 Agriculture minister clarifies demonetisation did not have impact on farmers' adversity

Minister for Agriculture Radha Mohan Singh clarifies that demonetisation is not the cause of farmers adversity as announcement of the dmonetisation was made in November 2016 and the preparation of fields and ensuring avavilabilty of seeds and fertilisers started from October this year. 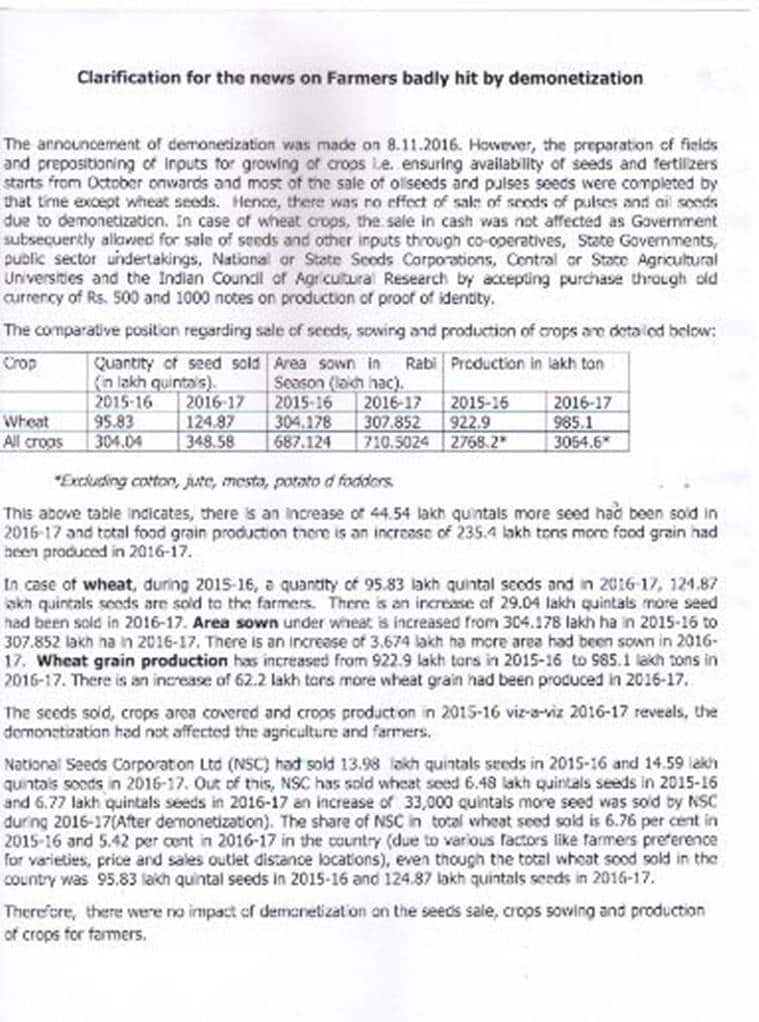 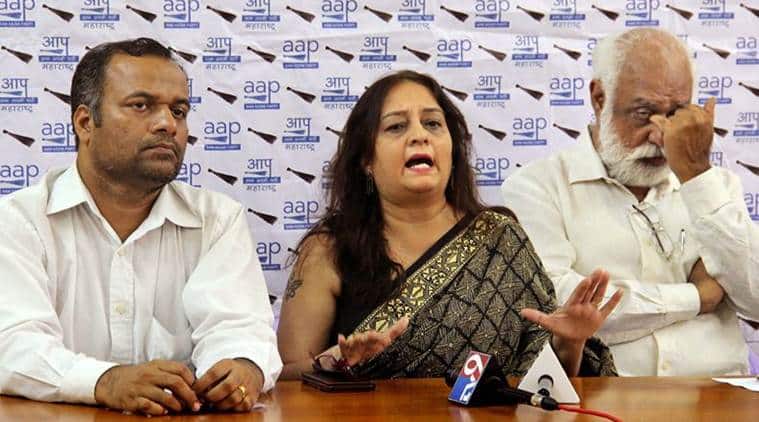 Protesters will halt at Somaiyya Ground for the night

Magsaysay award winner Dr Rajendra Singh, also known as Waterman of India, is among the marchers. The protesters started walking Wednesday afternoon and are scheduled to reach Somaiyya Ground in Mumbai's Sion area where they will halt for the night.

On Thursday they will reach Azad Maidan in south Mumbai and plan to hold a demostration near Vidhan Bhawan, where the state legislature session is underway, a leader of the march said.

The participants are mostly from Thane, Bhusawal and Marathwada regions, he said.

Parched villages begin to empty out in drought-hit Maharashtra

In Naydongri village in Nashik’s Nandgaon taluka, water scarcity in the summer months is an annual worry, but in the over five decades that the Gawliwada or community of buffalo herders has been here, distress migration has never been a concern, Kavitha Iyer, Parthasarathi Biswas report.  This year, however, with summer still four months away and acute water scarcity settling in already, Shankar Umaji Namde, 60, is in talks with landowners in Niphad, nearly 100 km away, to locate an alternative site for their animals.

Read | Parched villages begin to empty out in drought-hit Maharashtra

For many of the 180 drought-hit talukas, cyclical drought is a complex reality. While 2017 saw above average rains almost across the state, many talukas are currently facing their third drought in the last six years. Districts in Marathwada (deficit of 36.6 per cent) and Nashik district (deficit of 39.4 per cent) are the worst affected. Along with water scarcity as early as November has come the foreboding of a scorching summer ahead. And with rabi crop (sown in October-December) set to hit all-time low in the drought-hit districts, communities that do not traditionally migrate for work have begun to do so.

Stats on rain deficit in Maharashtra

30 per cent low rainfall in Maharashtra this year

Overall this year rainfall in Maharashtra is about 30 per cent lower than the 1210.8 mm average annual precipitation. On October 24, Chief Minister Devendra Fadnavis admitted that nearly half of the state (180 of 350 talukas) was drought-hit. 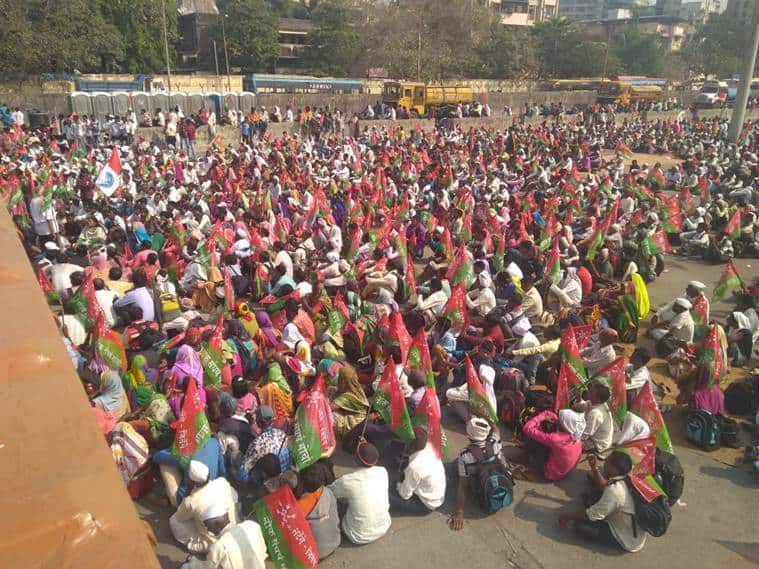 The state government last month declared drought in 151 talukas. There are total 355 talukas in Maharashtra. The government has urged the Centre to provide Rs 7,000 crore aide for drought mitigation.

The NCP president, Sharad Pawar, wrote a letter to CM Devendra Fadnavis last week to highlight the seriousness of drought following poor monsoon in Maharashtra. Pawar in the letter said, “The kharif crops are in trouble and there is no hope for rabi crop following poor rainfall. The state government should make adequate provision for cattle fodder and drinking water.”

The winter has just set in and we are facing drought situation. In absence of rain in August and September, water scarcity crisis has become serious, he added

Dhananjay Shinde, spokesperson of Aam Adami Party, which has extended support to the protest, said that many parts of the state that are witnessing the drought have not been declared drought hit. “The government needs to look at the ground reality and announce drought in more affected areas,” said Shinde.

He further said the representatives of all religions would also take part in the protest on Thursday to stand with the farmers for their issues. Other parties such as Janta Dal (Secular), Peasants and Workers Party (PWP) have also extended support to the protest.

'Farmers getting less than MSP'

Explaining the demands of the farmers, Pratibha Shinde, general secretary of the Lok Sangharsh Morcha said that non-transfer of the forest land on to the tillers’ name has deprived many tribals from availing the benefits such as farm loan waiver, crop loan, drought compensation among others. “Besides, the farmers are getting less than the MSP for their produce and there is no place where they can complain about it. So, there is a need to have a judicial system to keep check on whether the farmers are getting the MSP,” she added. In March this year, over 40,000 farmers held a six-day protest march from Nashik to Mumbai. (Express photo by Janak Rathod/File)

Earlier this year, over 40,000 farmers had marched from Nashik to Mumbai for six days to further their demands which included a loan waiver free of any conditions, implementation of the Forest Rights Act, fixed remunerative prices for agri-produce, and implementation of the recommendations of the Swaminathan Commission.

“When the farmers’ long march was held from Nashik to Mumbai in March this year, the government had promised that all pending claims pertaining to FRA will be cleared in six months. But it has failed to keep its promise,” said Pratibha Shinde, general secretary of the Lok Sangharsh Morcha.

In pictures | In parched Maharashtra, farmers and tribals hit the streets again