18 held for violence outside Nanded gurdwara

With the violence taking place at three different spots, three FIRs have been registered against 400 unknown people who were part of the crowd. 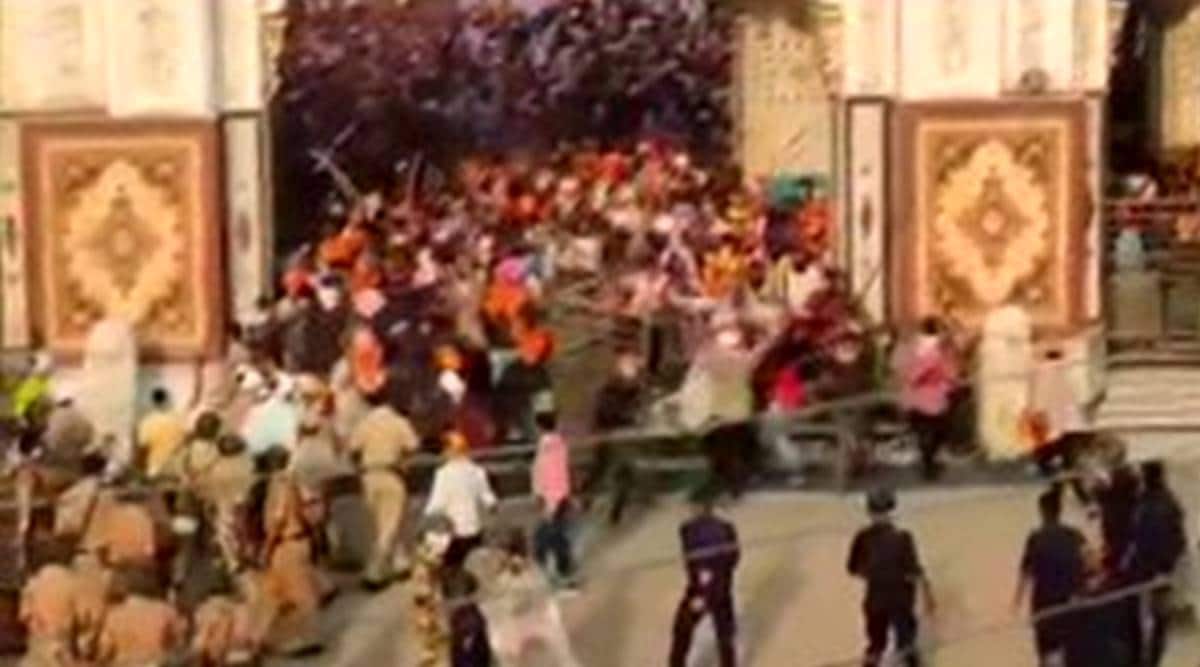 A video of the incident went viral on social media where a huge mob outside the Gurudwara can be seen kicking away the barricades put up by the police and attacking a handful of on duty personnel. (ANI)

A crowd broke through barricades and attacked policemen outside a gurdwara in Nanded on Monday evening after police refused permission for a procession due to Covid-19 norms and tried to disperse the crowd. Seven policemen were injured and eight police vehicles damaged.

Maharashtra DGP Rajneesh Seth told The Indian Express on Tuesday morning, “The situation is totally under control since yesterday (Monday). We have arrested 18 people for the violence. All injured policemen are out of danger.”

In a statement, the Nanded police said, “Every year the Sikh brothers at the Sach Khand Gurdwara organise the religious procession and seek permission for it in advance from the district collector. But this year, due to rising cases, a complete lockdown was ordered from March 26 in Nanded. Hence, they were denied permission to take out any procession. Further, a couple of meetings were held by police with the board members of the gurdwara, asking them to ensure the procession does not take place and preventive measures were taken to avoid any untoward incident.”

However, the police said, around 4 pm a procession was taken out inside the gurdwara premises. During this time, some youths allegedly defied instructions from clerics and police and insisted on taking out a procession on the road. When the youths tried to move the barricade and come on the road, the on-duty policemen stopped them, following which violence erupted.

A video of the incident went viral, showing a large crowd — armed with sticks and swords — outside the gurdwara kicking away police barricades and attacking on-duty policemen.

With the violence taking place at three different spots, three FIRs have been registered against 400 unknown people who were part of the crowd. They were registered under IPC sections for attempt to murder, assaulting public servant, rioting, use of arms, criminal intimidation and under various laws for violating pandemic guidelines.

Nanded SP Pramod Shewale said, “Two of our policemen suffered grievous injuries. One of them suffered injury on his head and another on his back.” When asked if anyone was attacked with a sword, Shewale said it was not clear.