Maharashtra Bandh Today, Maratha Kranti Morcha Highlights: Maratha outfits have called for a state-wide bandh in Maharashtra following the death of a 27-year-old man while demanding for reservations for his community.

A group of Marathas from Gangapur taluka had warned the local administration they would take ‘Jal Samadhi’ (drowning) at 3 pm in the river to protest on Monday. (File)

Maharashtra Bandh Highlights: Maratha outfits have called for a state-wide bandh in Maharashtra today after a 27-year-old protester allegedly jumped to his death into Godavari river in Aurangabad district. A pro-reservation Maratha leader said they have called the bandh across the state and would continue their agitation until Chief Minister Devendra Fadnavis apologised to the community.

The deceased was identified as Kalasaheb Shinde who was a part of the Maratha Kranti Morcha. On Monday, the morcha demanded an apology from Fadnavis for alleging that some members from the community were planning violence at Pandharpur town in Solapur district, where the chief minister was earlier scheduled to perform puja at a temple on ‘Ashadhi Ekadashi’.

The youth’s death has triggered fresh protests in several parts of the state, with opposition trying to put the responsibility of this incident on the BJP government.

Maratha outfits have called for a state-wide bandh in Maharashtra: Follow live updates.

Despite assurances from CM Fadnavis, nothing concrete has been done till now: Community leaders

Protesters at Kaygaon were shouting slogans hailing Shinde as a 'martyr', the police said, as per PTI.

Earlier, similar demands have been raised by community leaders and several rallies have been organised as well. Last year,  a huge rally was organised by the Maratha Kranti Morcha in this connection in Mumbai. Despite assurances from Chief Minister Devendra Fadnavis to fulfill the demands, nothing concrete has been done till now, community leaders claimed, as reported by PTI. 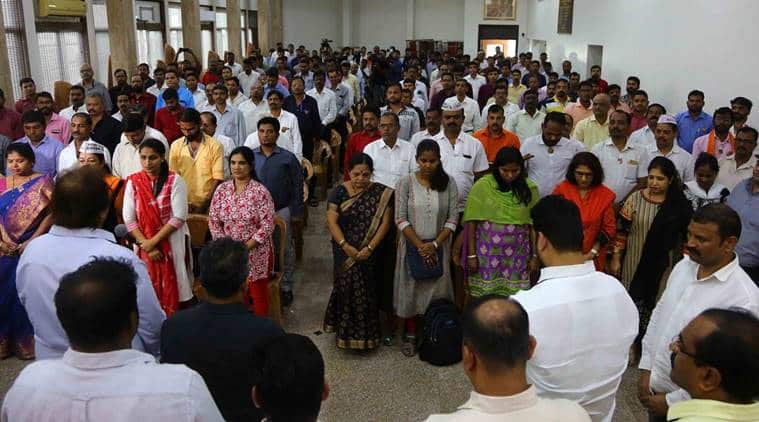 Local authorities and police to assess whether schools and colleges will be open tomorrow: Maharasthra minister Vinod Tawde

Maharashtra minister Vinod Tawde said that local authorities and police would assess the law and order conditions during the bandh tomorrow and will determine whether schools and colleges would be open or not in Thane, Mumbai and Raigad and nearby areas.

Local authorities and police to assess law and order conditions tomorrow and decide whether schools and colleges will be open tomorrow in Thane, Mumbai and Raigad and nearby areas: Maharashtra minister Vinod Tawde pic.twitter.com/L2Bdgyo2t5

All necessary deployments have been put in place for tomorrow's bandh, says Mumbai Police

In relation to the continuation of the bandh tomorrow, DCP Deepak Deoraj, PRO, Mumbai Police affirmed that all necessary deployments have been put in place and vigilance teams have been instructed to keep a watch at "sensitive" pockets. "We have told them to protest peacefully," said Deoraj.

Maratha Kranti Samaj announced that it plans to observe a "peaceful" bandh on Wednesday as well listing Thane, Navi Mumbai and Raigad to be bandh. "Schools and colleges will not be included in this bandh as we do not intend to trouble anyone," says the Maratha Kranti Samaj Maharashtra Minister & Shiv Sena leader Subhash Desai said that Maratha reservation has been delayed and how the court will react should be kept in mind. Activists ask shop owners to shut down their shops in the wake of the statewide bandh. The march started from Marathon Bhavan, along the Bajirao road and Laxmi road till Deccan on Tuesday. 60 cr people have changed their habit of open defecation: Murmu at Swachh...
‘India expert in IT, our neighbour in international terrorism&#8217...
Entered Congress president poll race to strengthen party: Mallikarjun Kharge
Take steps to encourage India’s transition away from Russian weapon...
PM Modi, President Murmu pay tribute to Lal Bahadur Shastri on his birth ...
More from India >>
Please maintain peace we can solve it by a peaceful dialogue: Minister of State

Minister of State Deepak Kesarkar appealed to people to maintain peace by peaceful dialogue. "15 lakh pilgrims are in Pandharpur for Wari, they should not face problems in going back to their homes," said Kesarkar.

One more man in Aurangabad attempts suicide. As protests intensify, internet services in the district have been suspended and bus services have been disrupted. Morcha workers shave their heads in protest.

Locals in Aurangabad attacked the vehicle of Shiv Sena MP Chandrakant Khaire, who went to attend the funeral of the youth who jumped to his death in a river on Monday.

Aurangabad: Locals attacked the vehicle of Shiv Sena MP Chandrakant Khaire when he went to attend funeral of the youth who drowned in Godavari river in the district y'day during 'jal samadhi agitation held' for reservation for Maratha community in govt jobs&education.#Maharashtra pic.twitter.com/73uQo6lgc1

Devendra Fadnavis on Monday skipped the annual puja at the Lord Vitthal Temple in Pandharpur town due to threats of protest by Marathas and instead performed rituals at his home in Mumbai. In the last few days, protests have take place in Buldhana, Akola, Parali, Washim and some Maratha groups have also planned to protest in Mumbai in the near future.

The protesters blamed Maharashtra Chief Minister Devendra Fadnavis remarks on Sunday and the morcha convenors have called for his resignation.  “Fadnavis had said that some of our people might release snakes among devotees in Pandharpur and might pelt stones. This remark has triggered the violence on Monday. We have held 58 silent morchas in the past and have never resorted to such tactics. The insulting remarks have angered the community,” said Virendra Pawar, a morcha leader.

Sakal Maratha Kranti Thok Morcha brought out an agitation of the Maratha community in the state demanding reservation in jobs and educational institutions. The agitation turned serious after 27-year-old Kakasaheb Dattatraya Shinde, who worked as a driver for a local Shiv Sena leader committed suicide on Monday.

“As the deceased youth is from Aurangabad, there will be complete bandh in Aurangabad on Tuesday. In the rest of the state, we will observe a bandh on Wednesday,” said Virendra Pawar, convener of Maratha Kranti Morcha.

Welcome to our LIVE blog. A bandh is being observed in Maharashtra to agitate against the death of a Maratha protester who jumped to his death into Godavari river in Aurangabad district. Maratha outfits immediately called for a bandh on Tuesday in the district and elsewhere in the state on Tuesday and Wednesday. Read further to get latest updates.

Maharashtra today observes a state-wide bandh being observed by Maratha outfits, a day after the death of a Maratha youth in Aurangabad. The man identified as 27-year-old, Kalasaheb Shinde jumped into a river to commit suicide. The Marathi Kranti Morcha will continue agitation until state Chief Minister Devendra Fadnavis issues an apology to the community.