He along with couple of his coevals were touted as the party’s GenNext, who were expected to reposition the grand old party as a young, modern outfit. 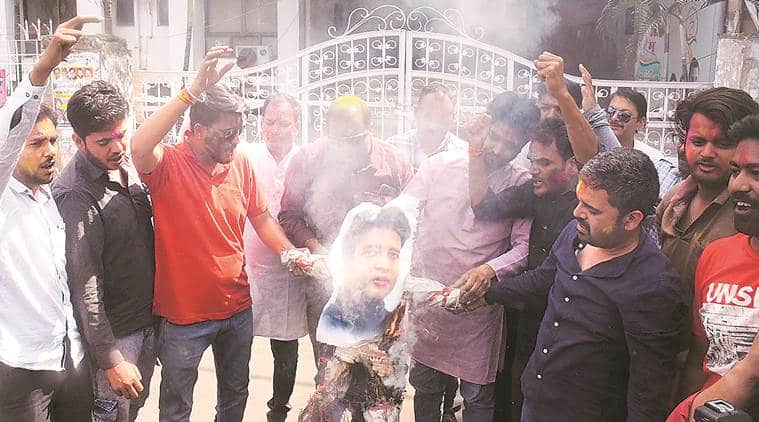 Congress workers burn an effigy of Jyotiraditya Scindia at the party headquarters in Bhopal, Tuesday. (PTI)

WHEN RAHUL Gandhi stepped down as Congress president following the party’s humiliating defeat in the Lok Sabha polls last May, the debate in the Congress circles on his possible successors had one name in common — Jyotiraditya Scindia. He along with couple of his coevals were touted as the party’s GenNext, who were expected to reposition the grand old party as a young, modern outfit.

In fact, his friend and former Lok Sabha MP Milind Deora had publicly taken his name and that of Rajasthan Deputy Chief Minister Sachin Pilot for the post of Congress chief some months ago. “Young leaders like Sachin Pilot and Jyotiraditya Scindia can lead and invigorate the party,” Deora had said. And today, Scindia is set to join the BJP, which has ironically always lampooned the Congress’s dynastic culture — in other words, the cult of “Baba Log”.

Read | Jyotiraditya Scindia: The Gwalior royal at the centre of turmoil in MP

An article headlined The Youngs guns of Congress, posted on the Congress website on September 8, 2018 had listed Scindia among a handful of young leaders to watch out for. “When Rahul Gandhi became vice-president of the Congress, one of his first moves was to create a platform for young leaders to come to the forefront of strategic decision making. He wanted to instill a new way of thinking in the party, one that would connect with the youth of the country & one that would help the party reach out to them.”

“These young turks of the Congress party are all set to take on the old disconnected Modi government and its allies. They’re fiercely intelligent, accomplished, filled with new ideas and most importantly passionate about the ideals and ideologies of the Congress party and India,” the article had said about the likes of Scindia, Sachin Pilot, Gaurav Gogoi, Sushmita Dev and Deepender Hooda.

Read | 1996 redux: When Madhavrao Scindia left the Congress to chart an independent course

In fact, Scindia’s exit from the Congress, which could bring down the Kamal Nath government, is in a way sweet revenge for him against the Nath-Digvijaya Singh duo. Singh, actively supported by Nath, had pipped Madhavrao Scindia for the post of chief minister in 1993. Madhavrao’s son has now turned the tables on the two veterans after 27 years. Having entered Lok Sabha from Guna in a bye-election in 2002 after his father’s death, Scindia junior’s rise in the party had been steady. He and Rahul were briefly together at Doon School. The friendship continued and it helped Scindia climb the ladder. He became a Union minister in 2008, just six years after entering Parliament. In 2012, he was elevated as a minister with independent charge. After the party lost power in 2014, he was made a chief whip. And in 2019, he was made a Congress general secretary along with Priyanka Gandhi after he lost out to Kamal Nath in the chief ministerial race.

The Harvard and Stanford educated scion of the Gwalior royal family, however, is not considered a pan-Madhya Pradesh leader or for that matter a man of the masses. His influence has always been limited to the Gwalior-Chambal belt, a family stronghold. He represented Guna four times since 2002 but fell by the wayside in the 2019 Modi wave. His father represented the seat nine times from 1971.

A royal and an elite, he was comfortable in the Lutyens political circle. His ambition to become the chief minister of Madhya Pradesh, realising that a Congress revival at the national level was not an immediate possibility, however, brought him on collision course with Singh, who worked behind the scenes to install Nath in the top seat. And when the now familiar young versus old warhorse tug-of-war played out in the Congress, Scindia would have hoped for Rahul’s backing. But that support did not come.

Read | Amit Shah at work, BJP gets a shot in the arm from Bhopal

While campaigning for the assembly elections in late 2018, Scindia’s supporters would tell voters in the Gwalior-Chambal belt that they should have him in mind because he could be the next chief minister, a line supporters of Nath took when they campaigned in Mahakaushal region of Madhya Pradesh.

Neither Scindia nor Nath was contesting and were both Lok Sabha members and the Congress had not announced its chief ministerial face. Nath was made Pradesh Congress Committee chief months before the assembly elections and it was widely believed that should the party get numbers he would be the first choice.

Although the mandate was fractured, Nath got the party’s nod while murmurs of protests from the Scindia camp did not attract much attention. Things did not improve for Scindia after that. While Nath contested assembly election from Chhindwara to validate his stay in office, Scindia lost the general election from family pocket borough Guna to a former aide.

Nath did speak in public about being burdened by the dual responsibility of the government and organisation. But he never resigned as PCC chief. Congress insiders believed his resignation would have brought Scindia in contention for the post of PCC chief, a possibility both Nath and Singh wanted to scuttle. The two were not ready to let any Scindia loyalist to occupy the post. Despite winning just one seat in the Lok Sabha elections, that too by a slender margin, Nath continued to occupy the PCC chief post.

With Nath launching his son into politics and Singh grooming his son to take over his mantle, Scindia suspected the two veterans were denying him his due deliberately to promote their wards. Nakul Nath is the MP from Chhindwara while Singh’s son Jaivardhan is a state minister.

The first indication that Scindia was thinking of charting a course different from the Congress’s came when he spoke in support of abrogation of Article 370. He also embarrassed the government by pointing out that the farm loan waiver promise had not been kept. Then he started writing letters to the chief minister taking on the government on local issues. Scindia removed Congress from his Twitter profile but claimed that nothing should be read into a minor change that was meant to shorten his profile.

The last trigger came in February when he threatened to take to the streets to express solidarity with guest teachers who are still protesting in Bhopal demanding that their services be regularised.