"They were in contact with Surinder Singh Babbar, a terrorist based out in England, through Facebook", Ludhiana Police Commissioner said. Arrested youngesters who were getting fund from Babbar Khalsa militants in Ludhiana. (Source: Express Photo by Gurmeet Singh)

The Ludhiana police in a joint operation with the counter intelligence wing and central intelligence agencies, allegedly arrested seven Babbar Khalsa militants on Saturday including a 17-year old minor from Moga.

Addressing the mediapersons, Ludhiana police commissioner RN Dhoke said that the arrested persons were associated with Babbar Khalsa, the pro-Khalistan militant group. They were allegedly ‘planning to disturb peace in Punjab and target the people who were writing against Khalistan and Sikh panth on social media.’

They were getting financial assistance and weapons from Surinder Singh Babbar, an active Babbar Khalsa commander hiding in England, said Dhoke.

Police sources said that it is also being probed if these persons were involved in the mysterious murders of Hindu leaders including senior RSS leader Jagdish Gagneja, Shiv Sena leader Durg Prasad Gupta and Hindu Takht leader Amit Sharma.

The arrested minor was allegedly garnering support for Khalistan and Babbar Khalsa on social media and also met several people across Punjab to garner support and finances for their activities. As per the village residents in Moga, he recently got baptized and was very active on social media.

Dhoke said, “There is absolutely no doubt over the role of minor arrested from Moga. He met several people in Amritsar to get support for their pro-Khalistan activities.”

The seven suspects were produced before the court on Saturday. The court remanded six of them for seven days in police custody. The minor has been sent to juvenile home on judicial remand.

Police said that three suspects including Onkar Singh, Jugraj Singh and Amritpal Singh from Amritsar are aged between 18 to 22 years. Sources said that they are school dropouts and were helping the three others in identifying ‘anti-Khalistan’ pages on social media and the people running them.

Amanpreet, who worked as a priest in gurudwara was trying to ‘gather like minded people’ to collect funds for their planned conspiracies. Kuldeep Singh worked as a transporter while Jasvir was one of his drivers.

The police has recovered three weapons including a 32 bore pistol and two 315 bore pistol along with cartridges from them. 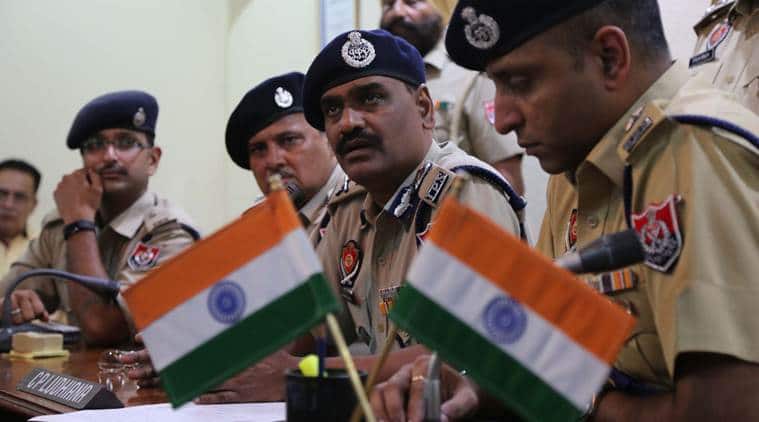 The police commissioner also said that they were in direct link with Babbar Khalsa commander. “They wanted to disturb the peace of Punjab and conspiracies to target anti-Khalistan groups, writers and other people were in pipeline. Surinder was providing them with weapons and funds from England. We are probing about the leaders and writers who were on their target,” he said. He added that Surinder and other arrested persons used to communicate through Facebook or WhatsApp and avoided calls.

“It was timely intervention by police otherwise a huge problem was on its way for Punjab,” said Dhoke.

A fresh FIR has been registered against the accused under the sections 16,17,18,19 and 20 of The Unlawful Activities (Prevention) Act, 1967 and the sections 25, 54 and 59 of the Arms act at division number 7 police station. None of them have a criminal background in the past.