The party convention comes just weeks after the BJP suffered defeats in the Hindi heartland states of Chhattisgarh, Madhya Pradesh and Rajasthan, which were attributed to anger amid the trading community and upper castes over GST and the Centre’s legislative intervention to strengthen the Atrocities Act. 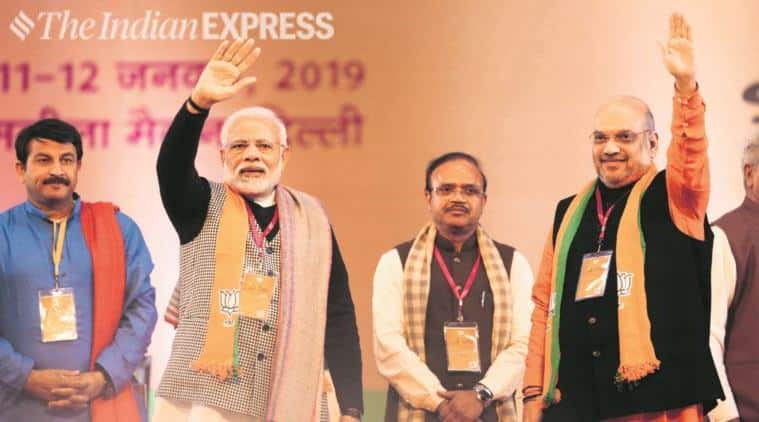 Amit Shah (right) listed out party’s achievements and praised the work done under the leadership of Narendra Modi. (Express photo by Neeraj Priyadarshi)

Drawing parallels with the third Battle of Panipat, which the Marathas lost “leading to 200 years of slavery”, BJP chief Amit Shah warned his party Friday that the Lok Sabha elections will be a decisive contest.

Inaugurating the BJP national convention in New Delhi, where party leaders down to the district level will be given clarity on the party’s campaign in the run-up to the polls, Shah listed all the major steps taken by the Modi-led government. But it was his reiteration of building the Ram temple at Ayodhya that drew the loudest applause from an estimated 12000-strong crowd of party leaders from across the country.

“The BJP wants the Ram Mandir at the very spot. We are duty-bound to build the temple and still are. It is the Congress that is creating hurdles in the process. But we are trying to expedite the case which is currently tabled in the Supreme Court,” Shah said.

The party convention comes just weeks after the BJP suffered defeats in the Hindi heartland states of Chhattisgarh, Madhya Pradesh and Rajasthan, which were attributed to anger amid the trading community and upper castes over GST and the Centre’s legislative intervention to strengthen the Atrocities Act.

Shah began his hour-long address lauding the Prime Minister for the “historic” steps he had taken for economically backward upper castes and small traders. “Modiji has taken two historic decisions in a week’s time… Reservation bill has been a demand for many years,” he said referring to the Constitutional amendment Bill passed by Parliament to provide 10 per cent reservation for the economically backward in the general category in jobs and education institutions.

While his remarks on the Ram temple and the GST were met with applause, the crowd’s response Friday was tepid compared to earlier BJP meets after the 2014 victory. Even when Modi walked out on the stage, after hoisting the party flag at the Ramlila Maidan, only a fraction cheered. But, towards the end of Shah’s speech, the cheers returned as did chants of “Modi, Modi”.

Shah projected the Lok Sabha polls as a clash of ideologies and called the proposed Opposition alliance a “sham”. He claimed that “removing PM Modi is impossible” and said: “I know Modi since 1987 and not a single election has been lost under him.”

Drawing parallels with the third Battle of Panipat, he said: “Some battles are limited to their time, others define their era. The third battle of Panipat saw Ahmad Shah Abdali defeating the Marathas who had won 131 battles before that, it led to 200 years of slavery and colonialism,” he said. “I believe the 2019 battle is going to be like this…The party should ensure a victory for the Narendra Modi government in 2019, as this battle too will be decisive.”

Referring to the SP-BSP alliance expected to be announced Saturday, Shah said the “bua-bhatija” alliance could not stand each other but have now joined hands fearing the BJP.