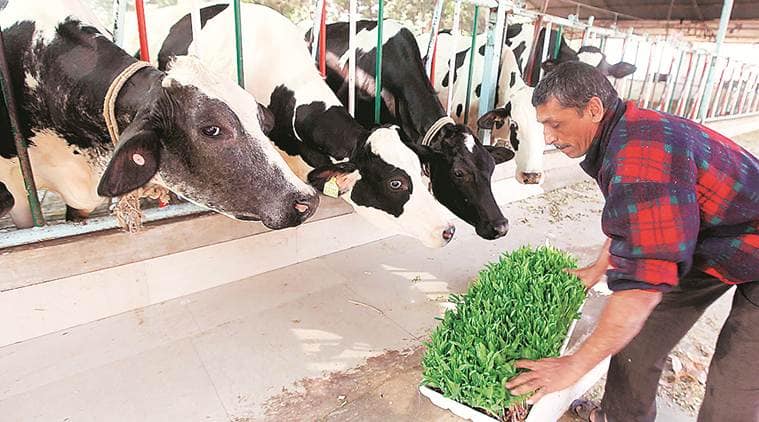 The BJP-led government’s efforts to promote conservation and rearing of desi breeds through schemes like the Rashtriya Gokul Mission (RGM) notwithstanding, India’s indigenous cattle numbers continue to decline. According to the provisional 2019 Livestock Census report — the data of which is still under scrutiny and validation — the country’s total population of indigenous and nondescript cattle is estimated at 139.82 million. This is a 7.5 per cent drop over the previous 2012 census figure of 151.17 million and consistent with the falling trend since 1992, when it peaked at 189.37 million.

All this is clearly a reflection of farmer preference for animals yielding more milk. A typical desi Gir, Sahiwal or Red Sindhi cow gives only 1,500-2,000 litres over a 300-305 days lactation cycle, compared to 7,000-8,000 litres by exotic breeds such as Holstein-Friesian and Jersey and the 4,000-4,500 litres of crossbreds. Also, the average age of first calving/lactation for exotic/crossbred cows is only about 28 months, as against more than 40 months for desi breeds. 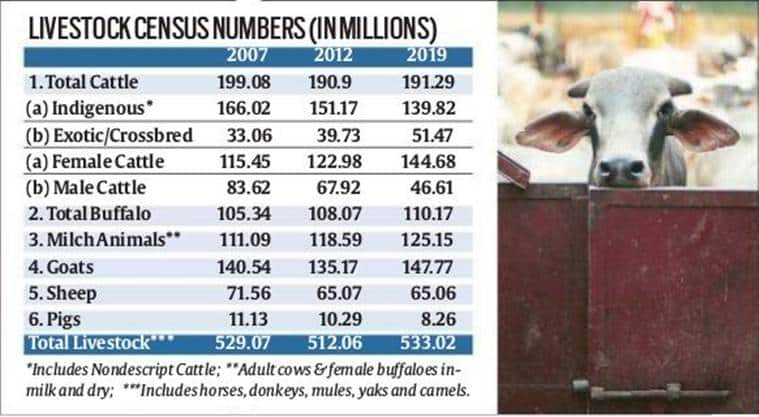 The RGM, launched in December 2014 with a budget of Rs 2,000 crore-plus, aims at development of indigenous cattle (through selection of high genetic merit bulls for breeding) as well as upgradation of nondescript animals (by using elite desi breeds, including Gir, Sahiwal, Rathi, Deoni, Tharparkar and Red Sindhi). But the results are simply not visible on the ground, where farmers are only increasingly choosing to rear exotic or crossbred cows, if not buffaloes that produce milk with higher fat and solids-not-fat content.

Another indicator of farmers valuing cattle purely for milk, as opposed to draught or breeding purposes, is the falling male population. Male cattle numbers in India have dipped from 101.60 million in 1992 to 67.92 million in 2012 and further to 46.61 million as per the 2019 Census, even while registering a rise for females from 102.99 million to 122.98 million and 144.68 million in these years.

The 2019 Livestock Census was conducted between October 1, 2018 and July 17, 2019. Unlike the previous 19 censuses that relied on manual entry, this one was done by enumerators collecting field data using computer tablets and uploading the same to a central server. Around 57,000 enumerators and 11,000 supervisors were deployed in the data collection exercise, for which the National Informatics Centre developed an Android-based mobile application. In all, some 26.01 crore households and 0.44 crore non-households across 666,028 villages and 89,075 urban wards were covered.

“The current report is an interim one, based on data collected and sent by the enumerators till July 17, which was the last date for uploading. The data finalisation process by the supervisors is still underway, which will be followed by further cleaning and validation. The final report should be ready by this month-end,” sources said.
The latest Census also points to a continued rise in the country’s buffalo population from 108.70 million in 2012 to 110.17 million in 2019 (see table). Over a longer time period, between 1992 and 2019, the overall buffalo count has gone up from 84.21 million to 110.17 million, even while dropping from 204.58 million to 191.29 million for cattle.

“The available data does not suggest any impact as yet of the anti-slaughter policies of the BJP governments, whether at the Centre or in states. Buffalo numbers rising and desi cattle falling is not a new phenomenon. It was happening even earlier. And farmers seem to be keeping more milch cows, despite problems in disposal after they cease to be productive,” the sources pointed out.

The 2019 Census estimates India’s total livestock population at 533.20 million. That includes animals whose counts have recorded increases (goats and sheep), declines (pigs, donkeys, camels and horses) or little change (yaks and mules) since 1992.