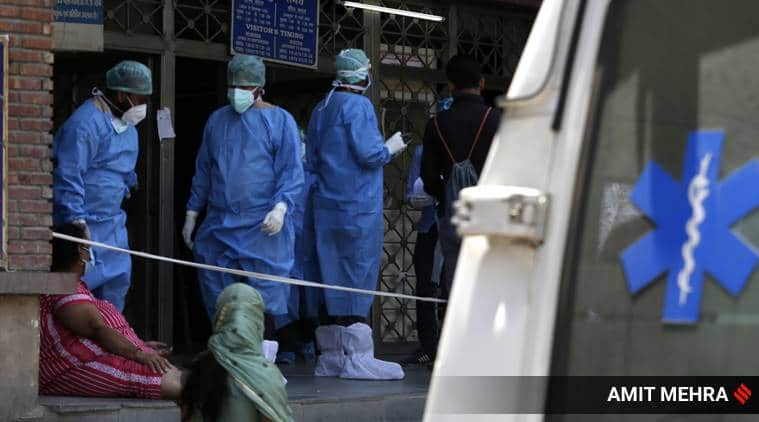 States with the biggest coronavirus outbreaks are below the national average in contact tracing, signalling the importance of the frontline healthcare workers.(Express Photo by Amit Mehra)

State government data shows that there are significant vacancies in Accredited Social Health Activist (ASHA) positions in several urban Covid-19 hotspots, even as the frontline workforce is largely responsible for contact tracing.

Similarly, Madhya Pradesh’s urban centres with heavy caseload have many vacant ASHA positions. Indore has 20% positions vacant with 724 urban ASHA workers. Bhopal has 25% vacancies, Ujjain 28% and Gwalior 52%. These are all equal to or above the state’s average vacancy rate of 20%, according to state government data.

Urban areas consistently have higher vacancies than rural ones. Half of Maharashtra’s approved ASHA positions (3,560 out of 7,493) in 27 municipal corporations are vacant, while 43% (1,051 out of 2,423) positions in its 33 municipal councils are vacant, according to state government data. In comparison, just 0.5% (324 out of 61,215) positions are vacant in the state’s rural districts. Vijay Kandewad, Joint Director at Maharashtra’s National Health Mission (NHM), said the outbreak has convinced him that urban areas should have as many ASHAs as rural areas. “There is a need. In urban areas, we are utilising all workers in all departments for corona… (But) some of our posts are vacant,” he said. He did not comment on the reasons behind the vacancies.

Read| One cotton mask each, and few given gloves, PPEs: At frontline of Covid fight but ASHAs ill-equipped

Shailesh Sakalle, Deputy Director for ASHA workers at Madhya Pradesh’s NHM, said the state has consistently had vacancies. “There are job opportunities in cities, and they get more money. Also, the selection process is complicated,” he said.

The NHM expanded the 2005 programme to urban slums in 2015, calling for one ASHA for every 1,000-2,500 population. Community health workers were mobilised in late-March or April this year for home visits, information dissemination, medicine delivery, suspected case surveillance and contact tracing for Covid-19 cases.

States with the biggest coronavirus outbreaks are below the national average in contact tracing, signalling the importance of the frontline healthcare workers. India on an average tested 20 contacts for each positive case found between January 22 and April 30, according to the Indian Journal of Medical Research. Maharashtra tested 7.6 contacts, West Bengal 7.6, Delhi 8.9, Madhya Pradesh 11.6 and Gujarat 11.7.

Many of these states say the outbreak has shown the need for a larger ASHA programme in urban areas. While vacancies in Delhi are far fewer — just 351 out of 6,345 approved spots —the state health minister had admitted on June 10 that the city’s contact tracing would be restricted only to immediate contacts because case numbers had outgrown capacity. Each of Delhi’s 11 districts has an average of 500 ASHA workers.

“A need is often felt for a similar link with the population living in relatively affluent areas when issues like this pandemic come up. ASHA is as relevant in urban scenarios,” said Monika Rana, Delhi State Nodal Officer for ASHA.

“ASHA is a type of programme that no matter how big it is, it is not enough,” Gujarat’s Public Health Additional Director Dr Prakash Vaghela said. He told The Indian Express that the state had only 3% vacancies, but did not provide district-wise vacancy data. According to data provided, Ahmedabad has 2,562 ASHA workers, Surat 1,852, Vadodara 1,698 and Rajkot 1,619.

West Bengal’s Director of Health Services Ajoy Chakraborty agreed that urban areas have a smaller frontline workforce. “Rural contamination was largely stopped by ASHAs. But their corresponding honorary health workers (in urban areas) have a major challenge. They are not experienced like ASHAs. We were on track to fix this, but we need more time,” Chakraborty said.

He did not provide vacancy data but said “there are almost none” in urban areas and 10% in rural ones.