Kumaraswamy swearing-in: "The newly formed JD(S)-Congress coalition in Karnataka will take office Wednesday and names of the ministers in the Cabinet will be announced a day after the new Karnataka government clears a trust vote on May 24, Kumaraswamy said.

Hoardings and cutouts of JD(S) leader and chief minister-designate H D Kumaraswamy and Congress leaders placed in front of the Vidhana Soudha before the swearing-in ceremony of JD(S) and Congress alliance, in Bengaluru, on Wednesday. (PTI Photo/Shailendra Bhojak)

JD(S) leader H D Kumaraswamy was sworn in as the Karnataka chief minister in the presence of UPA Chairperson Sonia Gandhi and Congress president Rahul Gandhi, on Wednesday. Hammering out a final deal on the 34-member Cabinet, the JD(S) and the Congress decided it will comprise 12 JD(S) ministers and 22 from the Congress. The post-poll partners also agreed to Dalit leader and state Congress president G Parameshwara as Deputy CM and Congress leader K R Ramesh as Speaker of the Karnataka Assembly. “The newly formed JD(S)-Congress coalition will take office Wednesday and names of the ministers in the Cabinet will be announced a day after the new government clears a trust vote on May 24, Kumaraswamy said Tuesday.

The initial disquiet over power-sharing got over after Kumaraswamy met alliance partners Sonia and Rahul on Monday evening, when both sides had agreed to “forget the past, look at the future and forge a long-term relationship”. The meeting was aimed at finalising the modalities of government formation and ministerial berth sharing between the post-poll allies.

Kumaraswamy is currently addressing the press, fresh after being administered the oath of office.

Recap of the ceremony

Click here to read what happened at the oath ceremony today

Kumaraswamy is being administered oath by Governor Vajubhai Vala.

Congress president Rahul Gandhi and UPA chairman Sonia Gandhi are last of the Opposition leaders to step on to the stage. Earlier, the crowd outside Karnataka Vidhana Soudha broke into a loud cheer when Congress leader Mallikharjun Kharge took the stage.

Former prime minister HD Deve Gowda takes the stage. He greets Akhilesh Yadav and other leaders. Kumaraswamy joins him next.

BSP supremo Mayawati is the next Opposition leader to join Akhilesh Yadav on stage. They warmly exchange pleasantries.  They were then joined by former JD(U) leader Sharad Yadav. 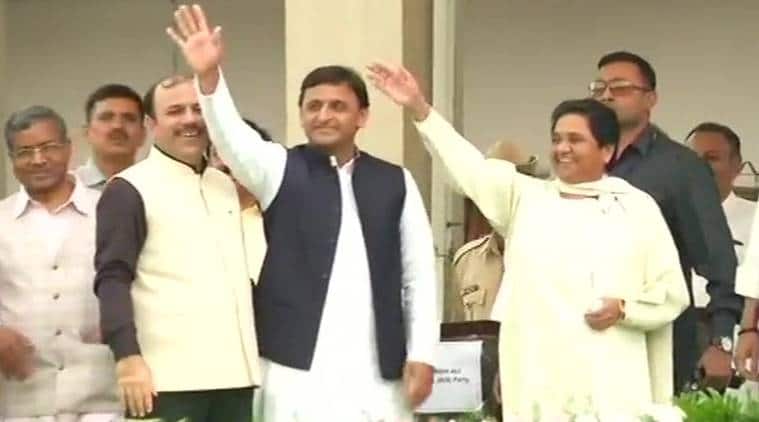 The sky opens up again. Supporters bring out blue tarpaulin covers to protect themselves from the rain. While Some are seen shielding themselves with plastic chairs.  Akhilesh Yadav appears to the first Opposition leader to arrive on the stage.

Arrangements in full swing despite rain

There was a brief spell of rain earlier in Bengaluru but it seems nothing can spoil the mood outside Vidhana Soudha today.  The arrangements for the swearing-in are underway.

Pat on the back for newly elected Congress MLAs

We cannot independently verify at the moment what Sonia and Rahul said in the meeting, but Congress' 78 MLAs must be lauded for resisting the temptation to defect after the fractured verdict. Congress strongman DK Shivkumar oversaw the arrangements to transport the lawmakers to a hotel in Hyderabad in a bid to keep the flock together.  He is likely to get a plump portfolio for his efforts once Kumaraswamy proves his majority in the assembly.

Will there be a second deputy CM?

With  Dalit leader and state Congress president G Parameshwara being picked as the Deputy Chief Minister, there is still no word on who will be nominated to the post of  the second deputy CM. Reports earlier suggested that the there would be two Dy CM posts -- one for Congress and other JD(S). It is still unclear whether there will a second deputy for Chief Minister-designate H D Kumaraswamy.

A sea of JD(S) supporters outnumber the Congress' outside the Vidhana Soudha. The crowd is still building up here in Bengaluru. Two huge TV screens have been erected behind the stage to display live visuals of the swearing-in.

BJP leader B S Yeddyurappa, who is leading the party's 'anti-mandate day' protests, called the swearing-in as a black day for Karnataka. Despite being rejected by the people, JD(S) and Congress entered into an unholy alliance to grab power, he said. "According to me they are not even going to continue for three months," Yeddyurappa told NDTV. 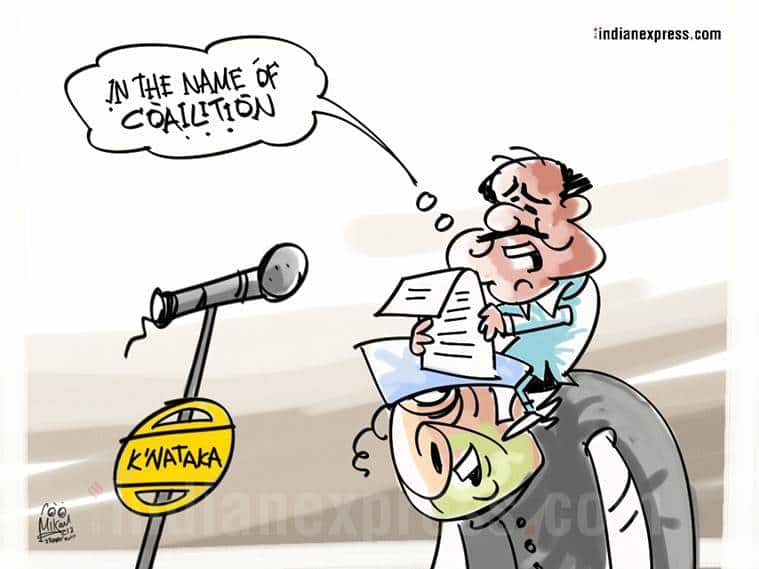 Congress leader DK Shivakumar said, 'No one is unhappy, we all are together. We are celebrating that our government is coming in power. I never said that I'm an aspirant of Karnataka Chief Minister post. All is well.' Shri Rajiv Gandhi was the one who inspired and encouraged me to enter politics. He was an incredible leader who brought out the best in people & worked hard for their well-being. #RememberingRajivGandhi pic.twitter.com/gzF6jEJw0z

Kumaraswamy swearing-in: Denying reports of differences between the coalition partners on Congress MLAs like D K Shivakumar and M B Patil for ministerial posts, H D Devegowda on Tuesday said, “We are not interfering in any way with the Congress’s choices. It is left to the Congress to decide who it wants in the ministry.”

Sonia and Rahul are scheduled to meet the 78 Congress MLAs at the Hilton Hotel in Bengaluru -- where they are housed -- to congratulate them for sticking together through the exercise of government formation.Among the guests are former Uttar Pradesh chief ministers Mayawati and Akhilesh Yadav, Andhra Pradesh Chief Minister Chandrababu Naidu, West Bengal CM Mamata Banerjee and Kerala CM Pinarayi Vijayan, according to the JD(S) officials. Telangana CM K Chandrashekhar Rao called on Devegowda and Kumaraswamy Tuesday and offered his wishes and expressed his inability to attend the swearing-in ceremony.