Munnar generally witnesses winter and occasional snowfall in the months of November, December and January, with the mercury picking up gradually in February. 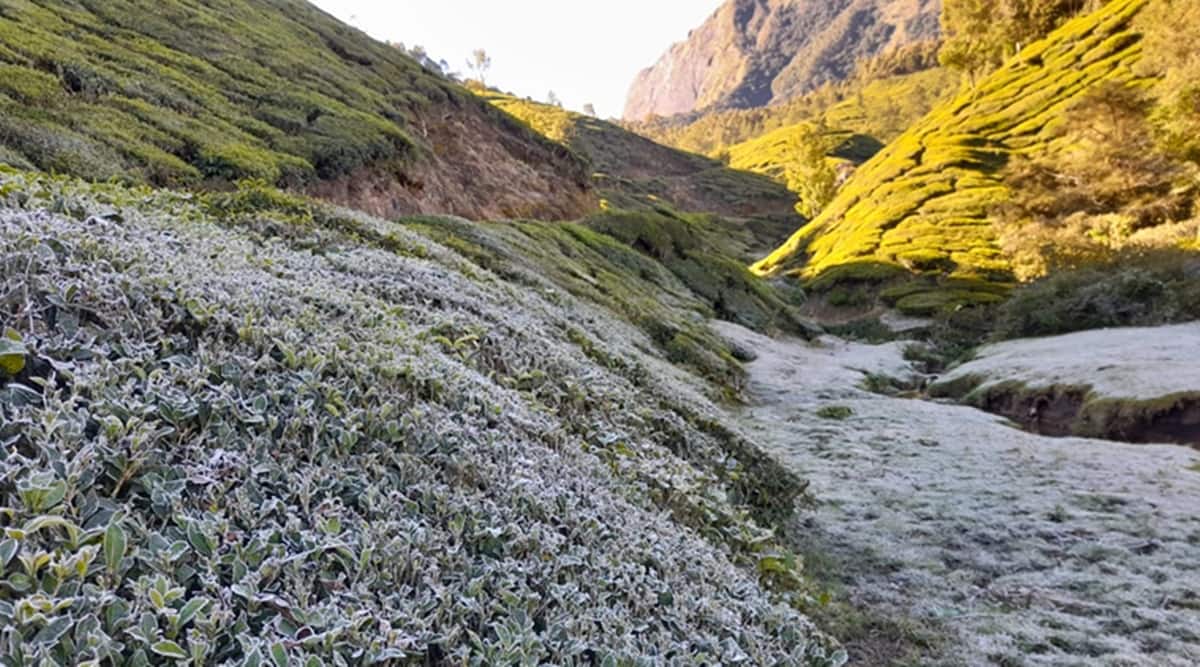 Experts say the climate in Munnar for the past few years has been beyond forecasting.

In one of the strongest indications of the effects of climate change, the hill station of Munnar, often referred to as the Kashmir of southern India, recorded minus two degrees Celsius Thursday, a temperature drop highly unusual for the month of February.

Munnar generally witnesses winter and occasional snowfall in the months of November, December and January, with the mercury picking up gradually in February. Temperatures dropped in the popular hill station in the first week of January, but rose again. (Credit: S Biju)

The season’s lowest temperature of minus two degrees Celsius was reported in Lakshmi Estate. Other places in Munnar that recorded temperature falls were Silent Valley (-2), Chenduvarayi (-2), Nalluthanni (-1), Munnar UPASI (-1), Sevanmalai (0) and Mattupetty (0).

“Generally, this is not the weather we see in Munnar this time of the year. Winter goes on from November to January followed by clear days in February. But in November and December 2020, we didn’t feel much of a chill. The chill has arrived only now, it must be the effects of climate change,” said Johnson Pius, who runs a hotel in Munnar. The season’s lowest temperature of minus two degrees Celsius was reported in Lakshmi Estate.

Experts say the climate in Munnar for the past few years has been beyond forecasting.

“The temperatures in these places are beyond control and the weather is tough to forecast. The change in its formation is clear and distinct. In the past, there have been changes in the formation of the weather, but they were not regular,” said Dr TV Sajeev, a Senior Scientist at the Kerala Forest Research Institute (KFRI).

It has been reported that winter arrived in Munnar late by almost three weeks due to persistent rain. Temperatures dropped in the popular hill station in the first week of January, but rose again. And now, in February, they have dropped far too low.

Gopakumar Cholayil, a scientific officer at the Kerala Agriculture University, said, “It was in 2019 that serious cold conditions were reported in Idukki, especially Munnar. Cold winds were also reported. Temperatures even went down to minus 4 degrees celsius. The kind of snowfall we usually see in Kashmir, Kullu and Manali, we saw it then here which was the highlight of the season. It was rare in Kerala’s weather conditions and such occurrences are part of climate change.”

He added that temperatures during the day-time in high-range areas like Idukki generally rise and fall at night. Munnar witnesses severe chill at night while the days usually see clear weather.

At the same time, the chill in the air in Munnar will help the tourism sector immensely. In 2019, around 2.5 lakh people travelled to Idukki, a majority of them to Munnar. But in 2020, around 1.41 lakh tourists visited the district after Munnar and other hill stations reopened to tourists post lockdown.