The Kerala government sought the assistance of Army, Navy and Air Force for rescue operations as several towns were flooded and hundreds of houses inundated, with rivers overflowing and reservoirs inching to maximum storage level. 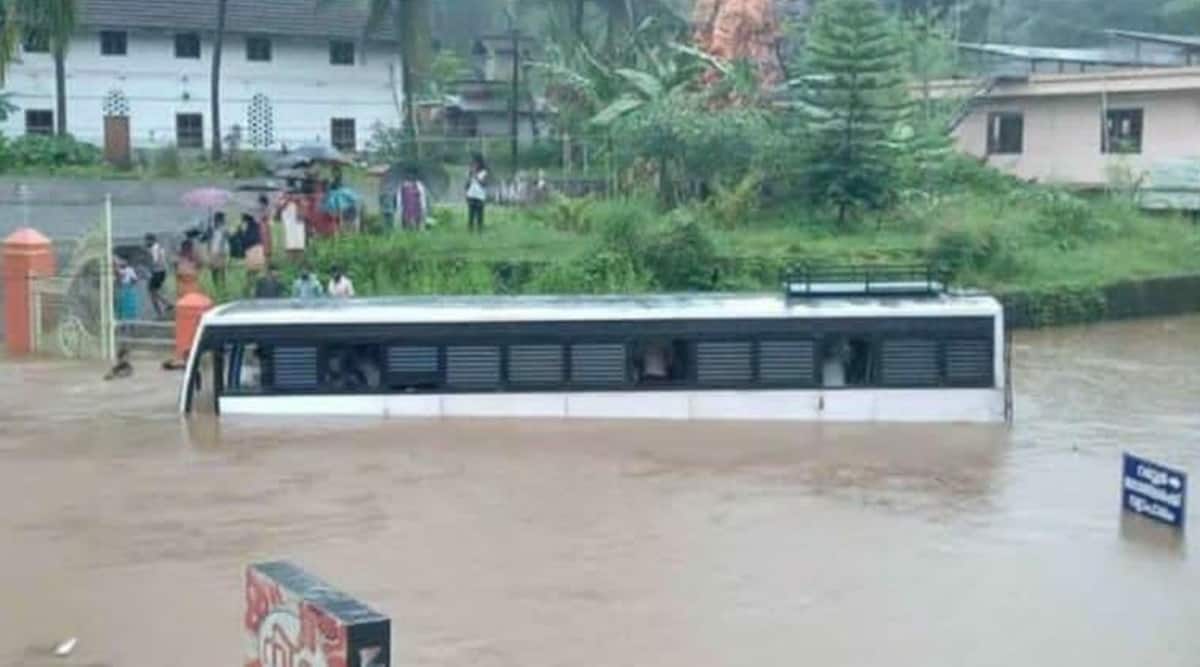 Six people were killed and at least 15 others are missing after extremely heavy rain triggered massive landslides in central Kerala’s Kottayam and Idukki districts on Saturday.

The Kerala government sought the assistance of Army, Navy and Air Force for rescue operations as several towns were flooded and hundreds of houses inundated, with rivers overflowing and reservoirs inching to maximum storage level.

After the Met department predicted heavy to extremely heavy rains across the state on Saturday night, the government has sounded a red alert in six districts, banned entry to tourist destinations and warned against travelling to hilly regions. Shutters of nine dams have been lifted while a blue alert (second stage) has been declared in the state’s largest reservoir Idukki, where the water level is 2,393 ft as against the full reservoir level of 2,403 ft.

Explained |What caused heavy rain and landslides over southern Kerala

At Koottickal village in Kottayam district, three houses were washed away in a landslide. A five-member family has gone missing in the calamity after their house was washed away in the flash flood. Three bodies have been recovered from the region and search is on for those trapped in the sludge and debris.

In another landslide at Kokkayar at high ranges of Idukki, at least seven people are missing after five houses were washed away.

Landslides were reported from various parts in Kottayam and Idukki districts

Rescue operations have been delayed as roads leading to the landslide-hit areas were flooded. Assistance from the Navy has been sought for airlifting those trapped in the region.

My thoughts are with the people of Kerala. Please stay safe and follow all safety precautions. #KeralaRains

“The situation in the state is grave, but the weather forecast has said the situation would not get worse. The monthly pilgrimage to Sabarimala temple, which was slated to begin on Sunday, would be abandoned till October 19,” said Vijayan. Colleges and higher education institutes, slated to reopen on October 18 after the second lockdown, will now open on October 20, the CM said.

People being evacuated from a KSRTC bus submerged in flood waters in Poonjar of Kottayam district in Kerala. No casualties were reported in the incident.https://t.co/HwiiNq4qLK pic.twitter.com/NgqHNp2STw

A defense spokesperson said the Indian Air Force and Indian Army stationed in Kerala have deployed their assets for rescue operations. All the bases under Southern Air Command have been put on high alert in view of the prevailing weather situation. Mi-17 and Sarang helicopters are already in standby mode. One column of the Army has moved to Kanjirappally in Kottayam for rescue operations.

In an official statement, the IMD said an intense spell of rainfall activity over south peninsular India is likely to continue till October 17.

The southwest monsoon for Kerala, from June to September 30, has been normal for the state with a deficiency of 16 per cent. In the northeast monsoon season, from October 1 to December 31, the normal rainfall for Kerala is 491.6 mm. However, in the last two weeks ending on October 16, the state has already recorded 331.4 mm rain as against the actual normal rainfall of 164.1 mm during the period. Hence, the state has already got large excess rainfall in the last two weeks.

Former Poonjar MLA PC George, whose home came under floodwaters on Saturday, said he had never seen such a catastrophic flood. —With inputs from Vishnu Varma in Kochi.