The BDJS was formed in 2015 mainly as a political arm of the backward Hindu Ezhava community outfit Sree Narayana Dharma Paripalana Yogam. 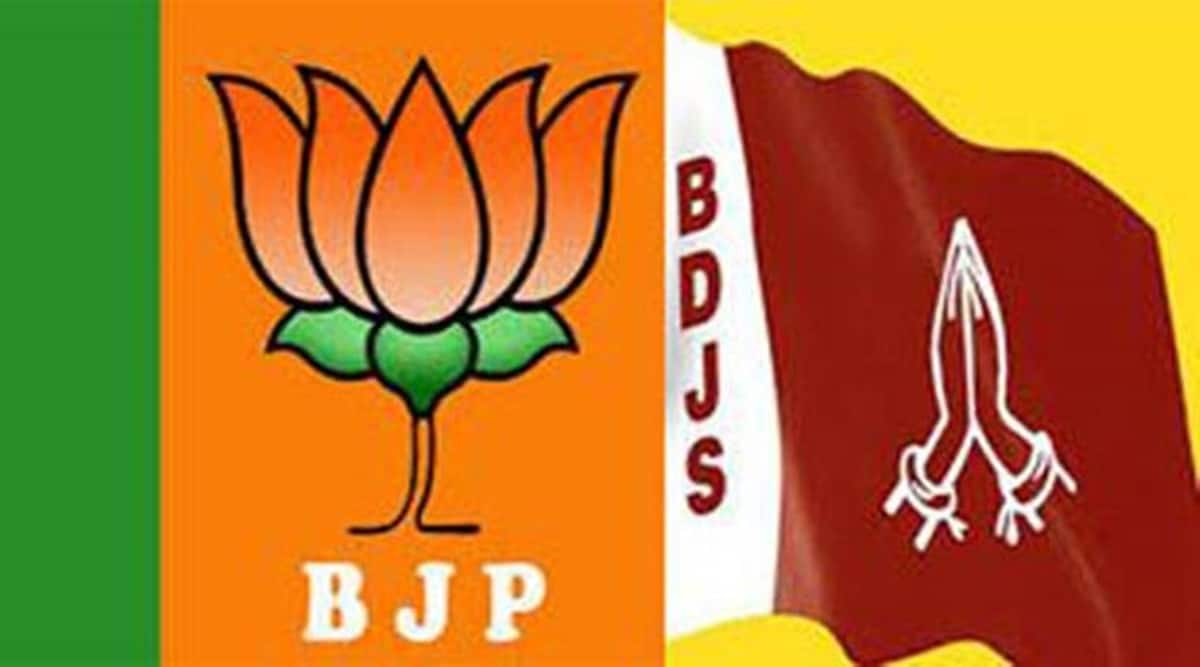 As an ally of the NDA, the party made its electoral debut in the 2016 assembly elections and played a crucial role in improving the vote share of the NDA in the state.

The Bharath Dharma Jana Sena (BDJS), a constituent of the NDA in Kerala, on Thursday split, with a section of leaders breaking away and announcing a new party that will work with the Congress-led UDF in the upcoming assembly elections. The rebel leaders also alleged that the BJP has made a secret understanding with the ruling LDF for the elections.

Announcing the decision to float the Bharathiya Jana Sena (BJS), rebel leaders V Gopakumar and N K Neelakandan said the LDF government had deeply hurt sentiments of Hindus by allowing entry of women of menstruating age into the Sabarimala Temple – a move that followed a Supreme Court verdict in 2018.

“Thousands of faithful, including BDJS workers, faced police action when they protested against the women’s entry into the temple. Now, as part of implementing Congress-free Kerala, the BJP wants to see the LDF retain power in the state in the coming assembly elections. The Hindu faithful cannot accept the BJP’s conspiracy to ensure the victory of the LDF,” said Gopakumar.

Neelakandan, who has been a prominent leader of the Kerala Pulaya Maha Sabha (KPMS), an outfit of the Scheduled Caste community Pulaya, said they have support of 11 out of 14 district committees of BDJS. “The newly formed BJS would support the UDF without any conditions. We have already had deliberations with the UDF leaders. It is up to the UDF to decide on how we should be accommodated.”

He alleged that BJP leaders have been silently instructing their party workers to ensure the LDF’s victory in the assembly elections. “They (BJP) have become suddenly silent about gold smuggling case,’’ he said.

Another factor, according to the rebel leaders, is that the BDJS has not got a deserving space in the NDA. Many district committees wanted to quit the NDA ahead of the last Lok Sabha elections, they said. In the recent local body elections, they said, the BJP did not help BDJS candidates and fielded its own candidates against it.

Although the rebel leaders said they had support of majority of the BDJS district committees, Thushar denied the claim. “Those leaders have left the party with parliamentary dreams. The BDJS is a party with a clear political agenda and it would continue with the NDA,” he said.

The BDJS was formed in 2015 mainly as a political arm of the backward Hindu Ezhava community outfit Sree Narayana Dharma Paripalana Yogam with its general secretary Vellappally Natesan as its patron. As an ally of the NDA, the party made its electoral debut in the 2016 assembly elections and played a crucial role in improving the vote share of the NDA in the state. It garnered 8 lakh votes from the 37 seats it contested.

However, ties between the BJP and BDJS strained over the BJP’s alleged reluctance to give key posts in Union government’s undertakings to BDJS nominees.

Amit Mitra ill, CM to read out vote on account in Assembly today