An orange alert was sounded at the Idukki dam at 7 am Monday after the water level in the reservoir touched 2396.86 ft. The full reservoir level is 2403 ft. 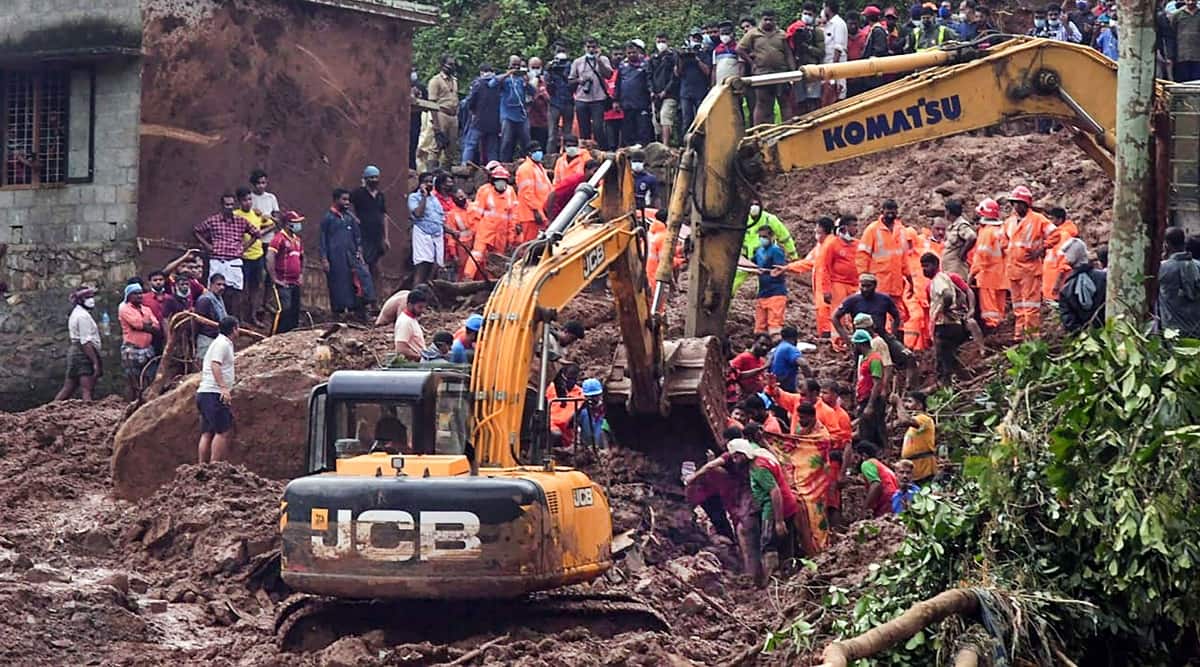 NDRF team during a rescue operation at Poovanchi hill in Kottayam district on Sunday. (Photo: PTI)

The death toll following floods and landslides in Kerala climbed up to 27 on Monday as more bodies were recovered from under the debris at Koottickal in Kottayam district and Kokkayar in neighbouring Idukki district.

According to the state government’s figures, while 13 bodies were recovered from the landslide-hit area of Plappally in Koottickal panchayat, nine were retrieved from Kokkayar. Early Monday morning, as rain abated and rescue operations resumed in Kokkayar, the body of seven-year-old Sachu Shahul was the last to be found. Rescue operations are going on to find the whereabouts of Ancy, a woman who had gone missing near the area where the panchayat office is located during the landslide.

Additionally, there have been deaths by drowning in Kozhikode, Thrissur and Palakkad districts. On Saturday, two people drowned when the car they were travelling in was swept away by floodwaters in the Kanjar area of Idukki district.

Meanwhile, an orange alert was sounded at the Idukki dam at 7 am Monday after the water level in the reservoir touched 2396.86 ft. The full reservoir level is 2403 ft. Ernakulam collector Jafar Malik said in a Facebook post that the Kerala State Electricity Board (KSEB), which manages the dam and generates power from it, has conveyed that the water level in the dam is likely to touch the red alert level of 2397.86 ft by Monday evening and the upper rule level of 2398.86 ft by Tuesday morning.

Landslide at the Kokkayar area in Idukki. (Photo: PTI)

Malik added that the state-level expert committee will study the water levels and give appropriate directions to the Ernakulam and Idukki administrations. If the dam gates are needed to be opened on Tuesday to release the excess water, its timing and the amount of water to be released will be conveyed in advance to people residing in areas close to the river. Control rooms have been set up at the taluk level to answer queries related to the opening of the dam shutters.

Gates of the Kakki dam in Pathanamthitta district were opened at 11 am after the water level touched 983.5 ft following heavy rains in the catchment area of the reservoir. The maximum level in the reservoir is 986.33 ft.

A view of the landslide-affected area of Koottikkal in Kottayam district. (Photo: PTI)

A high-level review meeting headed by Chief Minister Pinarayi Vijayan is in progress in Thiruvananthapuram to take stock of the rising water levels in dams and reservoirs across the state as well as damages inflicted by the floods and landslides in the past few days. The reopening of colleges and other higher educational institutions following the Covid lockdown has been delayed to October 25 now.

Rainfall is expected to resume from Wednesday again, courtesy a fresh spell of easterly wave which likely to affect parts of southern India. The IMD has declared a code yellow alert in 11 of the 14 districts on that day.

Revenue Minister K Rajan has made it clear that with more rain predicted in the state in the forthcoming days, pilgrims cannot be allowed to enter the Sabarimala temple for the festivities associated with the Thulam month. Those stationed in the base camp of Nilakkal must return home, he requested.

Amid heavy rains in Kerala, bride and groom use cauldron to reach wedding venue