In Kerala village, farmers can mortgage their trees for interest-free bank loans

The ingenious plan, a brainchild of state Finance Minister TM Thomas Isaac, was formally rolled out earlier this week in Meenangadi, a panchayat of 33,000 people curled up in the Western Ghats hills in Wayanad district. 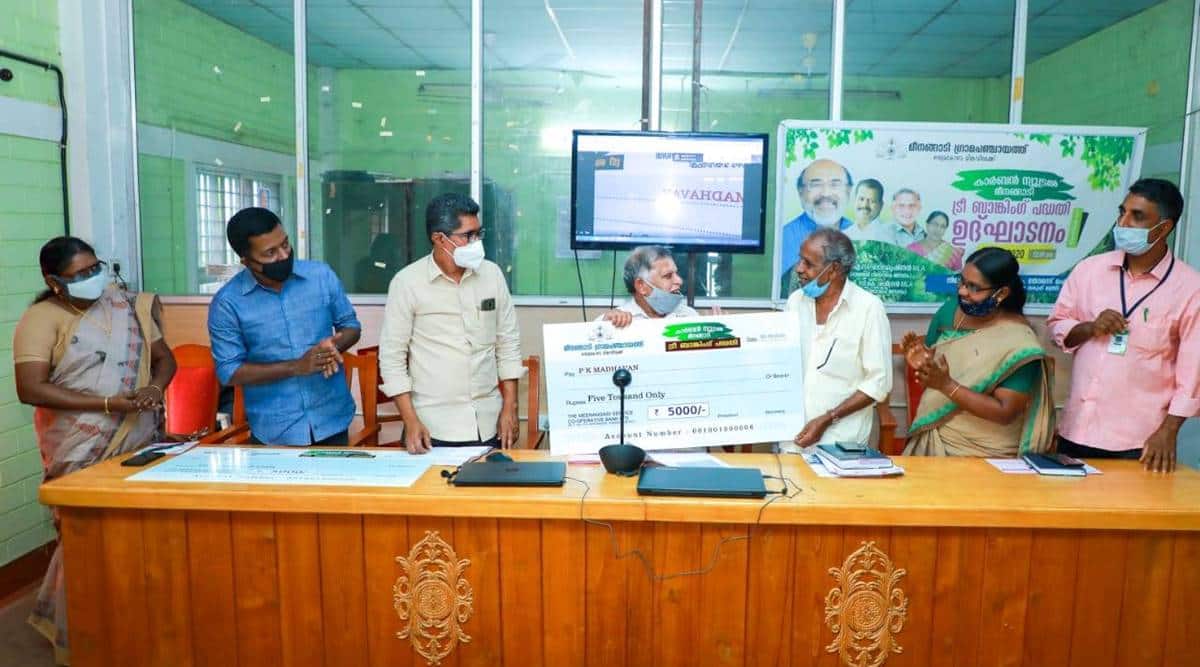 Local MLA CK Saseendran presenting a cheque of Rs 5000 to a farmer under the tree banking scheme on Tuesday.

In a bid to encourage planting and preserving trees and thereby reduce carbon footprint, a village in Kerala has kickstarted a project that will allow farmers to mortgage the trees on their land in return for interest-free bank loans.

The ingenious plan, a brainchild of state Finance Minister TM Thomas Isaac, was formally rolled out earlier this week in Meenangadi, a panchayat of 33,000 people curled up in the Western Ghats hills in Wayanad district.

The quiet village was the subject of an Indian Express report in February 2018 for its efforts to try and become the country’s first ‘carbon-neutral’ panchayat by slashing greenhouse gas emissions and increasing green cover. The exhaustive government-backed project was launched with much fanfare in Meenangadi by Isaac in 2016, a few months after his return from the climate change conference in Paris.

Addressing the people in the village back then, Isaac had said, “If our climactic ecosystem is gone, what do we do? When does the monsoon begin? Is there any set pattern to it anymore? If monsoons are gone, will we have tropical rainforests or the Western Ghats? Will Wayanad survive?.” 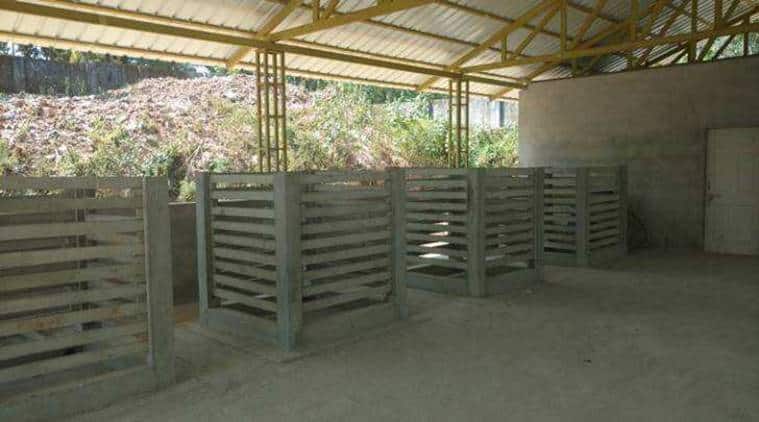 An aerobic compost unit installed as part of the carbon-neutral project in Meenangadi.

As a solution to those concerns, Isaac had mooted the idea of financially incentivising people, especially farmers, to grow and preserve trees through the ‘tree banking’ scheme. After a year of planting, the tree saplings can be pledged by farmers for interest-free loans from a local cooperative bank that will help them take care of the trees as well as attend to other needs on his/her farm. This way, farmers will be discouraged from slashing trees, a practice that has been widespread in recent years and considered fatal to the biodiversity health of Wayanad.

Beena Vijayan, who heads the local panchayat, said, “Each sapling can be pledged for Rs 50 per year for a period of 10 years. So if a farmer pledges 100 trees on her land, the bank will pay her Rs 5000 per year for 10 years in the form of a loan. While the interest on the loan is paid by the panchayat, the farmer has to pay only the principal amount, that is, if she decides to cut the tree. If she chooses not to cut down the tree, the loan doesn’t have to be repaid.”

“The state government had deposited a corpus fund of Rs 10 crores for the project at the Meenangadi service co-operative bank which is used to disburse the loans. The interest from the deposit is used to pay the interest off the loans given to farmers. So far, we have sanctioned loans for 184 farmers in two wards of the panchayat,” she added.

Over the last two years, Vijayan claimed the panchayat has planted nearly 1.57 lakh saplings on private plantations free of cost through its MGNREGA nursery. These saplings are in the process of being geo-tagged through a software. The geo-tagging helps panchayat officials monitor the growth of the sapling at six-month and one-year intervals. If the sapling goes on to be mortgaged by the farmer, its geo-tagging will ensure if the tree gets cut in future. As per the tree banking scheme, the panchayat will help nurture the sapling for the first three years, following which the farmer will be responsible for it.

The panchayat has listed 34 species of trees that farmers can plant on their land which include mango, jackfruit and pine. Those like teak and Indian rosewood are barred from the project. Through large-scale planting of fruit trees, the panchayat also hopes to be self-sustainable and even become home to a fruit-processing industry in future.

“The collapse of the farming sector especially in Wayanad has meant that farmers are ready to cut down and sell even small trees. Through this project, at least temporarily, farmers will have a financial boost to protect their trees. More importantly, it works to our central long-term objective of cutting down carbon emissions in the area,” said TV Surendran, secretary of the local co-operative bank.

Meanwhile, the carbon-neutral project in Meenangadi is progressing well, said the panchayat head.

“This year, we were hoping to complete another round of carbon audit to find out the amount of excess carbon in the atmosphere that we would have to sequester through other methods. But the pandemic delayed our plans,” she said.

“But our action plan is ready. We have taken a lot of steps like planting trees, changing all the streetlights to LED and implementing a zero-waste model. Through another carbon audit, we would be able to know how much we have minimized our emissions. If we are found to have achieved a state of carbon-neutral, we can officially declare the panchayat as one.”

Once that happens, the coffee, pepper and organic vegetables grown in the village can be branded as ‘carbon-neutral’ and help fetch higher prices. The state government has already said that the methodology implemented in Meenangadi would be mirrored in other panchayats in Wayanad district.

Explained: Here is why the discovery of a new organ in the throat is significant