Kerala women’s wall: Some bat for gender equality, others take a contradictory stand

In line with the attempts of the ruling Left government in Kerala to project a progressive and liberal outlook on gender issues, lakhs of women turned up across the 14 districts of the state to stand alongside each other as part of the 'vanitha mathil' or women's wall programme on Tuesday. Lakhs of women turned up across the 14 districts of the state to stand alongside each other as part of the ‘vanitha mathil’ or women’s wall programme on Tuesday. (Express Photo)

In line with the attempts of the ruling Left government in Kerala to project a progressive and liberal outlook on gender issues, lakhs of women turned up across the 14 districts of the state to stand alongside each other as part of the ‘vanitha mathil’ or women’s wall programme on Tuesday.

Minister for Health and Family Welfare KK Shailaja became the starting point of the women’s wall in northern Kasaragod district while Politburo member and senior CPM leader Brinda Karat stood as the concluding link of the wall in the southern tip of Thiruvananthapuram district. The entire ruling LDF cabinet, senior leadership of the CPM-led coalition, leaders of community organisations like the Sree Narayana Dharma Paripalana (SNDP) Yogam, which represents the Hindu Ezhava community, those of the Punnala Sreekumar faction of the Kerala Pulaya Mahasabha, representing the SC community, Left-aligned intellectuals, writers, thinkers, activists and actors participated in the movement.

The idea of the women’s wall took shape in the backdrop of the protests around entry of women at the hill shrine in Sabarimala. The ruling CPM-led government has backed the entry of women of all ages and stressed the legal responsibility of the government to abide by the top court verdict on the matter. The women’s wall has been envisaged as a counter to the RSS-BJP campaign behind the Sabarimala protests where the latter has taken a position backing the traditions of the temple which do not favour the entry of women of menstruating age. Through the programme, the ruling Left parties have indicated their intention to stand on the right side of history, to hold aloft the renaissance values and ideologies that shaped the social reform movements of Kerala. Politburo member and senior CPM leader Brinda Karat stood as the concluding link of the wall in the southern tip of Thiruvananthapuram district. (Express Photo)

At Edappally, one of the busiest traffic points in Ernakulam district in central Kerala, the sun shone brightly as scores of women lined up on the side of national highway 66. While there were not a lot of kids or minors, there were indeed a lot of elderly women. Exactly at 3.30 pm, the women stood shoulder to shoulder along the entire highway stretch, many wearing the traditional ‘kasavu mundu’. Announcements were made over the microphone not to clog the road traffic and to avoid accidents. Senior CPM leadership including district secretary CN Mohanan, former secretary P Rajeev, Politburo member MA Baby, Politburo member Subhashini Ali, writer M Leelavathy were present at the event. Nuns of the Jacobite faction of the Christian Church were also present.

At 4 pm, the women were requested to raise their hands forward and take a pledge to uphold and protect the social reform values of Kerala and to support the constitutional tenets of gender equality.

Nithya, 23, a member of the KPMS from Vypeen who works at the IT hub of Infopark in the city, said she had come to show her solidarity with the ‘government’s vision of a gender equal society.’ “We have to create a new generation that’s well aware of our state’s rich social reform movements and what they stand for. We have to fight against blind traditions and superstitions,” she said.

Elizabeth, a school teacher and a member of the Left-backed Kerala State Teachers Association, said the movement was an important marker of female empowerment at a time when the women’s right to pray has been violated by male-dominated protests at Sabarimala.

“Viswasam ulla sthreekal keranam (Those who have faith in the deity must be able to enter and pray),” she said.

“It’s a Supreme Court order and the Kerala government has to follow it. The Pinarayi government is handling it in a mature manner. Some political organisations are playing games by making women stand in front,” she added. 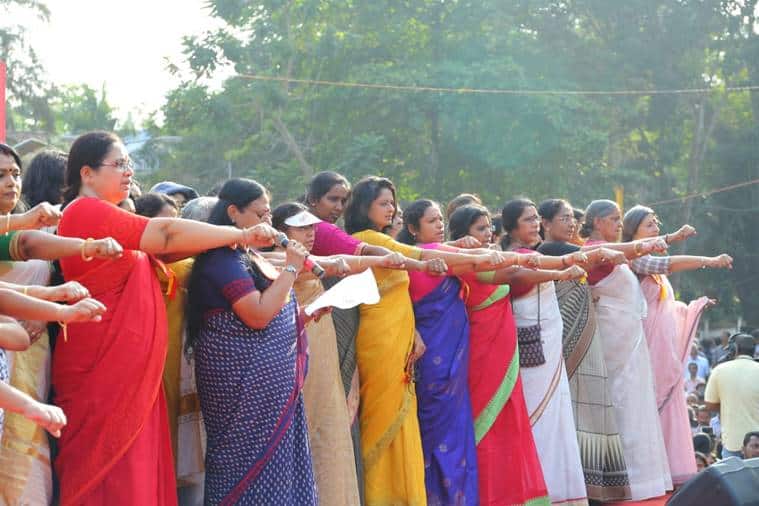 At 4 pm, the women were requested to raise their hands forward and take a pledge to uphold and protect the social reform values of Kerala and to support the constitutional tenets of gender equality. (Express Photo)

At the same time, as common with political rallies and public events, there were participants who could not rationally explain why they were there. It was evident that they had been mobilised by community organisations for the sake of building a crowd.

There were also those who took contradictory positions.

Ani, a housewife and a member of the KPMS from Vypeen, said she came for the programme to stand for the rights of women.

“But in the Sabarimala issue, we are on the side of belief (which bars women of menstruation age),” she responded smiling. Her friend, Sarada, also from the same neighborhood, laughed and nodded. 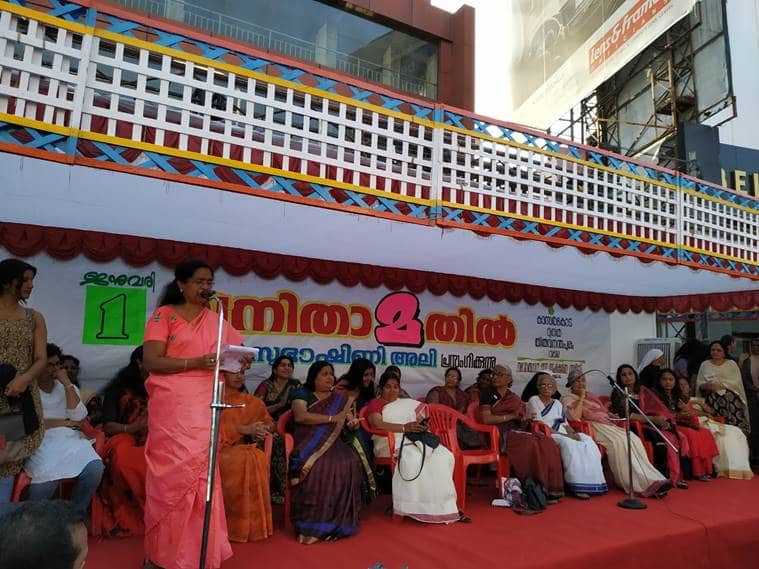 Shortly after the women’s wall disbanded, at a public meeting, 91-year-old M Leelavathy, one of Kerala’s most admired and respected literary critics and writers, underlined in a short speech that gender equality must not remain restricted to cultural and social spheres. “There must be changes in the political sphere too,” she said.

“For example, there’s a women’s reservation bill in Parliament. It advocates 33% reservation for women in parliamentary constituencies. But I ask, why 33%? Why not 50%? after all, women are half of the country’s population. Political leaders must ensure that they pass the bill,” she said.

Subhashini Ali in her address said she felt wonderful to see scores of women from one end of Kerala to the other upholding principles of equality.

“Many extreme reactionary voices have been speaking on behalf of women in Kerala for the last few months. They have been trying to tell people, ‘women want this, women don’t want this’. Today, lakhs of women have come here to say that you don’t need to speak on our behalf. We can speak for ourselves. We want our rights, our equality and we have to move forward. They are telling these people that we have rejected their regressive traditions,” she said.

‘Development of my caste first priority, society next’: Rajasthan minister