Rescue operations at the site of a landslide in Puthumala at Wayanad, Kerala. (Express photo)

Kerala Rains HIGHLIGHTS: A year after it battled the century’s worst floods, heavy monsoon showers in Kerala have claimed the lives of 83 people so far, PTI reported quoting authorities. As many as 2.51 lakh people from 73,076 families have been shifted to relief camps. The weatherman has predicted heavy rainfall in the state today and fishermen advised not to venture into the sea.

On Sunday, Congress leader and Wayanad MP Rahul Gandhi arrived on a two-day visit to Kerala and visited his Lok Sabha constituency, which is one of the severely affected areas in the state that has been battered by torrential rainfall. One of the worst-hit regions in the state is Puthumala in Wayanad, which was struck by a massive landslide on August 8.

The situation remains bleak in Karnataka, Maharashtra and Gujarat, where 97 people have lost their lives so far due to the monsoon mayhem. Floods in Karnataka since last week have claimed as many as 40 lives and displaced 4 lakh people. In Maharashtra, Chief Minister Devendra Fadnavis said the “unprecedented” rainfall this monsoon was “more than double” of that in 2005 when massive floods were witnessed.

Kerala reels under heavy rains, a year after century’s worst floods. The death toll mounted to 72 by Sunday, but some respite is in sight as rains subside.

On the 2nd day of my visit to Wayanad, my parliamentary constituency that has been badly hit by devastating floods, I met with members of the media to update them on my review meetings with state & district officials and my visits to affected sites and relief camps. pic.twitter.com/sbr9tC0ayx

Kerala: Flood hit Nilambur, ‘misses’ it’s date with Eid but sends out a message of resilience

Every year on Bakrid, the town of Nilambur and adjoining smaller neighbourhoods would revel in ‘perunaal’ mood. Home to a large Muslim population, the faithful would flock to their local mosques as daylight breaks and offer prayers. On Monday, Nilambur broke away from decades of ‘perunaal’ tradition as it grappled with one of its biggest tragedies. Close to 20,000 people across 13 villages in Nilambur Taluk are put up at relief camps after their homes were inundated with floodwaters. Nearly 500 homes are partially or completely destroyed. Read more here

Kavalappara landslide: Only house standing, but resident not sure if it’s a good thing to be alive

Around 8 pm on Thursday night, when Thankamani (49) and her husband Velayudhan heard a loud, booming sound, she recognised instantly that the hill that had never put them in danger was finally coming down. On Friday morning, the couple came out of their house to find their tiny neighborhood of around a dozen homes disappear. READ FULL STORY HERE

Integrated Defence Staff: Rains have eased out and water levels have started receding, surface communication is likely to be restored soon in Maharashtra. In Kerala weather is holding but with orange alert in force till tomorrow, close watch will need to be maintained on situation. Rains have stopped in North Karnataka and water levels have started receding. The situation is under control and de-requisitioning of Army is likely to commence today. With most areas being accessible by road, helicopters are also likely to be de-requisitioned.

17 bodies, including five of children, have been retirieved after the landslide in Kavalappara in Kerala. 15 of these have been identified. 46 bodies are yet to be recovered. (Names and details of those killed in the Kavalappara landslide)

At least 76 people have died after rains ravaged Kerala this month. 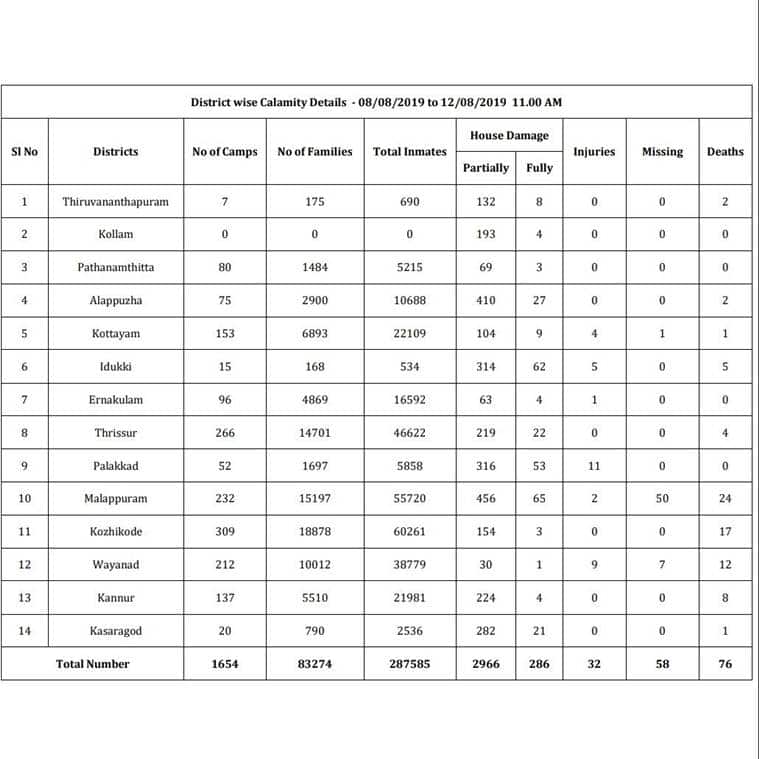 The Southern Railway on Monday announced that trains to Kerala, Mangalore and some regions in Tamil Nadu have been cancelled for the day, following an announcement by the Indian Meteorological Department (IMD) that parts of Kerala are likely to receive heavy rainfall.

Relief operations are in full swing in Nilambur, Kerala after Eid prayers in the morning. Nilambur has been left broken by the floods, its shops and commercial establishments plundered and its people wanting for relief. All mosques have directed to engage in service of those in flood and landslide affected areas. Overwhelmed by first flood in half a century, the city now tries to pick up pieces 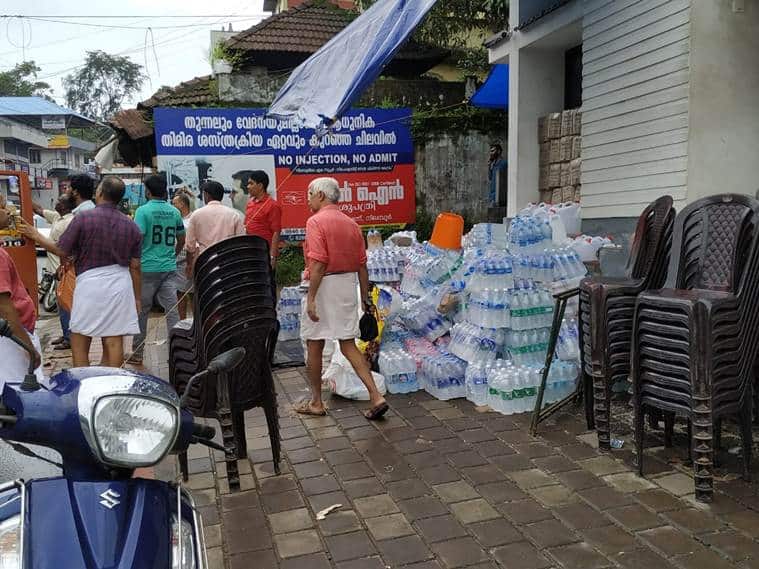 Congress leader and Wayanad MP Rahul Gandhi visited a relief camp in Kaithapoyil today. Addressing media, Gandhi said, "As your MP, I called CM and requested him to help here as aggressively as possible. I also called the PM and explained to him the tragedy that has taken place here and the need for support from the centre."

Gandhi earlier appealed to the people to provide relief materials to those hit by the devastating floods in his Wayanad Lok
Sabha constituency. He is currently visiting areas ravaged by floods and landslides in his constituency.

"My Parliamentary constituency Wayanad has been devastated by floods with thousands left homeless and shifted to relief camps", he said.

In pics: How flooded Kerala looks from the skies

In pics: How flooded Kerala looks from the skies

Death toll due to incessant rain and floods in Karnataka rose to 40 on Sunday, even as rescue operations continued till late in the night.

As per information from the state government, Belagavi district continues to be the worst-hit, with 12 deaths reported. Kodagu has reported at least seven deaths, while the toll in Uttara Kannada is four. Fourteen people are missing. READ MORE

Two fishermen from Chirayinkeezhu, Trivandrum have died after their boat capzised in sea, reported ANI. Senior Congress leader and Wayanad MP Rahul Gandhi said he will be staying in his Lok Sabha constituency for the next few days.  On Facebook, Gandhi listed a number of necessary items for those displaced or affected by the floods and staying in relief shelters. Donors can send the material to the following  Collection Centres in Malappuram District:

Rescue operations at the site of a landslide in Puthumala at Wayanad, Kerala. (Express photo)

Last year, the century’s worst floods in Kerala displaced millions of people, leaving nearly 400 dead. Heavy monsoon showers this month have inundated large parts of Kerala, triggering landslides and ringing alarm bells in the corridors of the state disaster management department (SDMA). In a repeat of last year, hundreds of people are already on the move leaving their inundated homes, mainly in the state’s northern and central districts, to temporary shelters set up at government and private schools.

Many of the state’s major rivers like Periyar, Manimala, Muvattupuzha, Chaliyar and Pamba are overflowing. People residing in settlements close to these rivers have been asked to exercise caution and relocate when water-levels rise.

Meanwhile, all rivers are in spate in Karnataka where the UNESCO world heritage site in Hampi, on the banks of the Tungabhadra River in Ballari district, has been inundated after over 1.70 lakh cusec water was released from a reservoir on Sunday morning. Tourists in Hampi have been shifted to safer places, officials said.

The unprecedented deluge since last week has left 31 people dead and displaced four lakh people in 80 taluks of 17 districts in Karnataka. Union Home Minister Amit Shah undertook an aerial survey of the flood-affected areas of Karnataka and Maharashtra.

Heavy showers continued to lash parts of Gujarat, the toll in rain-related incidents rose to 31 in the state, with 12 more deaths reported from Saurashtra region in last 24 hours