The visuals showed the minister stepping out of the car and breaking the stop barrier at the Paliakkara toll plaza before his car took off. 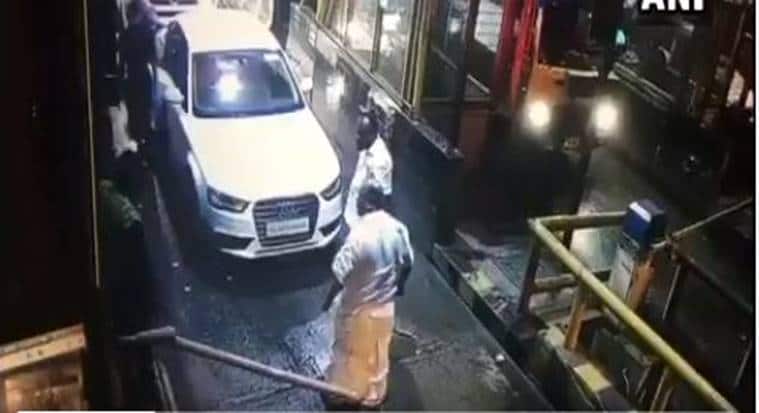 A visual grab of the MLA at the toll plaza along with his accomplices. (Source: ANI )

PC George, an Independent MLA elected from Poonjar constituency in Kerala, courted controversy Tuesday night when he broke a stop barrier at a toll plaza in Thrissur district. The incident, which took place around 11 pm Tuesday, was caught on the CCTV camera installed at the plaza. The visuals showed George stepping out of the car and breaking the stop barrier at the Paliakkara toll plaza before his car took off.

When asked to clarify, George defended his action and pointed fingers at the ‘inefficiency’ of the toll plaza officials.

“I was supposed to accompany the chief minister as part of the all-party delegation to meet the prime minister today. I had a train to catch from Kozhikode to my home but the train got cancelled. So I had to take the car all the way. Around 11 pm, my car reached the toll plaza in Paliakkara. Note that there are ‘MLA’ stickers at the front and back of the car. According to central government rules, an MLA doesn’t have to pay the toll on national highways,” he said on phone.

“I kept requesting them to let me go. They (toll officials) saw the ‘MLA’ sticker but kept looking the other way. I even offered to pay the toll because I wanted to get out of there. I waited for almost 3 minutes. By then, about 20 cars had lined up behind our car and they were all honking. That’s why I got out of the car and broke the barrier. I don’t regret it at all,” he added.

George said he has written complaints to the Chief Minister and the Speaker about the ‘harassment’ he faced at the hands of the toll officials. “As a public representative, my right to travel was being curtailed,” he added.

The toll officials have filed a complaint at the Puthukad police station against the MLA’s actions. An officer said the complainant stated that he couldn’t see the ‘MLA’ sticker on the car and hence the delay occurred. Police confirmed that legislators and parliamentarians in the state are not required to pay toll tax on national highways.

This is not the first time when George has been accused of indulging in such activity. Last year, he had assaulted a staff of the MLAs hostel canteen. Incidentally, a chargesheet in that regard was also filed against him on Wednesday.

Rahul Gandhi targets BJP with ‘Who am I’ quiz