Maradu flats demolition: Jain Coral cove, a 55-metre high-rise, was brought down at 11 am today. The controlled demolition was executed without any hiccups.

The last of the four illegal apartment complexes in Maradu, was razed down through controlled implosion method on Sunday, marking the completion of the demolition drive against the waterfront high rises ordered by the Supreme Court over three months ago.

This came a day after two buildings were razed in compliance with a Supreme Court order passed last year. Jain Coral cove, a 55-metre high-rise, was brought down at 11 am today. The controlled demolition was executed without any hiccups. Visuals showed the debris rising to at least three storeys high and was contained within the site.  Another building of the same height, Golden Kayaloram, was demolished at 2 pm today.

On Saturday, the first 19-storey building — H20 Holy Faith apartment — was levelled in seconds. A few minutes later, the 16-storey high twin towers of Alfa Serene were pulled down simultaneously.

All the four illegal residential apartments in Kochi's Maradu have been demolished, following the SC's orders. Follow Highlights from Kerala in Malayalam 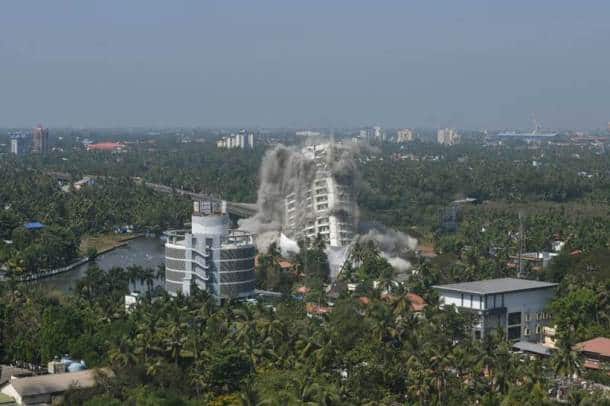 The last of the four illegal apartment complexes was razed down through controlled implosion method, marking the completion of the demolition drive against the waterfront high rises ordered by the Supreme Court over three months ago.

In a precise sequence, over 350 kgs of explosives filled in the structures were blasted in a controlled manner at the end of the third warning siren and the concrete colossus came crumbling down in seconds, triggering mammoth 'clouds' of dust. Just in a few seconds, the towering building, whose interior walls had been removed in pre-demolition work over the past weeks leaving it a concrete shell, became mounds of debris. (PTI)

Visuals of 16-storey Jain Coral Cove building being brought down Jain Coral cove, a 55-metre high-rise, was brought down at 11 am today. The controlled demolition was executed without any hiccups. Visuals showed the debris rising to at least three storeys high and was contained within the site.  Another building of the same height, Golden Kayaloram, will be demolished at 2 pm. A mock drill to condition the team of police, fire force, health officials and other experts for the exercise was carried out at Golden Kayaloram on Saturday evening. The mock drill at Jains Coral Cove was carried out on Friday.

WATCH: Moment when building got reduced to debris

Six seconds. That’s all it took for the 19-storey H20 Holy Faith apartment in Kochi to be turned to rubble in a cloud of dust through controlled explosion on Saturday. Twenty-eight minutes later, at 11:44 am, the twin towers of the Alfa Serene apartment similarly crashed to the ground, successfully capping the first phase of the demolition of four residential complexes in the city as per the orders of the Supreme Court. In May last year, the top court had ordered the razing of the four luxury apartments for breaching CRZ norms. READ MORE

Aerial view of people gathered to watch demolition of buildings The remains of the 19-storey H20 Holy Faith apartment after it came crashing down in a controlled blast. The Alfa Serene complex with twin apartment towers in Maradu was also demolished in a controlled blast.

#WATCH Kochi: Alfa Serene complex with twin apartment towers in Maradu also demolished.2 out of 4 illegal apartment towers have been demolished through controlled implosion,final round of demolition to take place tomorrow.Sec 144 of CrPC is enforced on land, air&water in the area pic.twitter.com/WsadhqPuDF

The 16-storey twin towers of Alfa Serene residential complexes were demolished in a controlled blast on Saturday. Both buildings have been successfully razed by the Kerala government.

Over the past two months, workers of the two demolition firms – Edifice Engineering and Vijay Steels – have been engaged in tearing down all ancillary structures, reducing the apartments to a bare concrete skeletal frame. Doors, windows and balcony railings were pulled out. Non-load-bearing walls were taken out to ensure a swift and clean fall. Steel and concrete joints of staircases were disconnected. The compounds were sealed off from the public and police officers deployed for security. Tall iron sheets were raised around the apartments to prevent splinters of concrete blocks. One of two Maradu buildings razed

One of the two Maradu flats - the H20 Holy Faith apartment - came tumbling down within seconds after the third siren was sounded. The twin towers will be demolished shortly.

Prior to the demolition, the first warning siren has been sounded. Here is the final view of the Maradu flats. The building is set to be torn down exactly at 11 am.

One last view of Kerala's Maradu flats. The razing of buildings will begin shortly. @IeMalayalam

People gather around for the much-anticipated event in Kochi where two buildings are set to be demolished shortly. The first 19-storey residential complex will be pulled down at 11 am, followed by two towers of 16-storey each. Watch: The first building to be torn down shortly

The H20 Holy Faith apartment will be torn down first exactly at 11 am. And shortly after the first demolition, the twin towers of Alfa Serene will be brought down five minutes later at 11:05 am.

Kerala's Maradu flat demolition: The first building, the H20 Holy Faith apartment, will be torn down at 11 am. The twin towers of Alfa Serene will be brought down five minutes later at 11.05 am today. @IeMalayalam https://t.co/GOO50Hxdnv pic.twitter.com/yjGq7M5s7Y

Good Morning!
Welcome to our LIVE blog. For latest updates on the demolition of the two buildings, follow this space.

Officials of the district administration, police and contractors Friday conducted a successful mock drill of the demolition exercise.

The Kochi police is likely to wrap the area around the four demolition sites with a thick security blanket. Around 500 police officers will be deployed at each demolition site. Traffic on the NH66 will be holed up for a few minutes before and during the implosion.

Explained | How four apartments in Kochi will be brought down

According to SB Sarwate, an Indore-based demolition expert and a consultant of the Kerala government for the Maradu demolition, for a 15-storey building, blasts can be conducted on 1st, 2nd, 6th, 7th, 11th and 12th floors.

The buildings are being razed following a Supreme Court order passed on September 27, 2019 for violating the Coastal Regulation Zone (CRZ) rules. The court had also ordered the state government to pay an interim compensation of Rs 25 lakh to each flat owner. It said this money can be recovered from those responsible for erecting the structures.