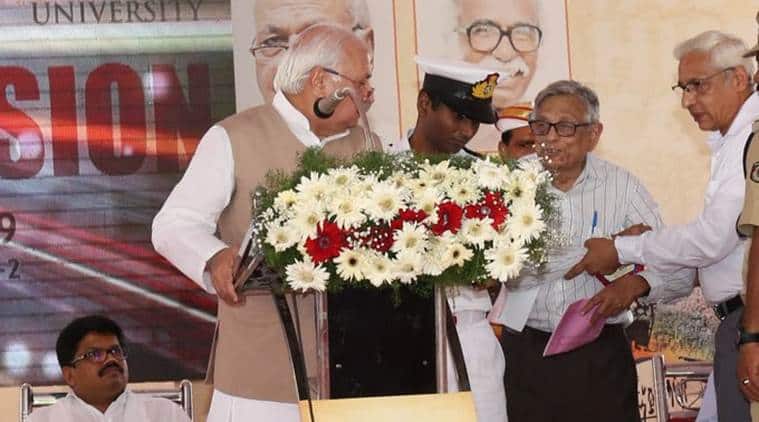 As Kerala Governor Arif Mohammed Khan on Saturday reiterated his stand in favour of the new citizenship law, the inauguration of the Indian History Congress in Kannur was marred by protest from delegates including the History Congress’ acting president Irfan Habib.

Following the protest, Khan had to abruptly end his inaugural address and get off the dais.

Khan said he did not start talking about the CAA issue, but “since you have raised the issue, I am duty-bound to respond”.

Before his inaugural address at the event in Kannur University, CPI(M) leader and Rajya Sabha member K K Ragesh hinted at the issue and accused the BJP of rewriting Indian history. Later, the governor started his speech by saying that he was deviating from the prepared address and “if you hadn’t raised the issue here, I would have restricted myself to the prepared speech”.

He said he believed that his opinion on the issue was correct, and was convinced that the opinion of those opposing the law is misleading and not based on facts. “Three times Mahatma Gandhi had invited those who differed on the issue to come for debate. Three times his offer was struck down. When you are shutting the door on debate and discussion, you are promoting the culture of violence. You have every right to protest as dissent is the essence of democracy,” he said.

On why Muslims are excluded from the new law, Khan said that Partition had created an extraordinary situation. People of Kerala were not affected by Partition, but they have strong empathy, he said. “If you feel your neighbour is feeling agitated, you come and join.”

As protesters stood up, Khan said, “You have no right to create disturbance. You have come with an attitude. You cannot shout me down.’’

As the venue became chaotic, Prof Irfan Habib, the History Congress acting president, went to Khan and spoke to him. Subsequently, Khan told the audience, “Professor Irfan is asking me to quote Godse.”

As police removed some protesting delegates, Khan reminded the agitators, “You have every right to stick to your opinion, but don’t try to shout down others.”

Expressing concern over the incident, the Indian History Congress secretary said, “Some delegates were peacefully standing and holding placards. They were roughed up by police.”

Over the last week, the governor has faced flak from the ruling CPI(M) and Opposition Congress over his stand on the new citizenship law. The Congress had cancelled an invitation for a party event as part of its boycott of the governor.

The BJP said that History Congress delegates targeting Khan exposed grave security lapses. “The state has to ensure safety of a Union government’s representative in Kerala. If the CPI(M) government fails to provide protection for the governor, the issue will be brought to the attention of the Union government,” said BJP state secretary M T Ramesh.

It added, “Habib expressed reservations about CAA which were addressed by Guv, but Habib tried to physically disrupt the Guv. The Guv deprecated this as undemocratic expression of intolerance towards differing voices. Guv said he was duty-bound to protect Constitution.”

Congress holds flag marches to ‘Save Constitution, Save India’