Kerala rains and floods highlights: Nearly 200 people have died since August 8. Essential services have taken a hit, with shortages in medical supplies and drinking water reported from several places.

Rescuers evacuate people from a flooded area to a safer place in Aluva in the southern state of Kerala, India, August 18, 2018. (REUTERS photo)

More than 200,000 families have taken refuge at relief camps set up across the state, an official at the Kerala State Disaster Management office said. Anil Vasudevan, who handles disaster management at the Kerala health department, told Reuters that authorities had isolated three people with chickenpox in one of the relief camps in Aluva town, nearly 250 km from state capital Thiruvananthapuram.

He said the department was preparing to deal with a possible outbreak of water-borne and air-borne diseases in the camps, where an estimated two million people have taken shelter since the monsoon rains began three months ago.

Meanwhile, for the first time since August 9, no red alert has been issued by the Indian Meteorological Department for any of Kerala’s 14 districts. However, the weather forecast for Ernakulam, Pathanamthitta and Alappuzha districts predicted heavy rains at isolated places. Kerala continues to remain on edge as the death toll since August 8 has climbed to 194. In a boost for rescue and relief operations in the flood-ravaged state, flight operations are set to resume from Kochi Naval Base from tomorrow.

Security checks are underway at Garuda Naval base in Kochi

Security checks are underway at Garuda Naval base in Kochi where a commercial flight is coming in after 18 years. 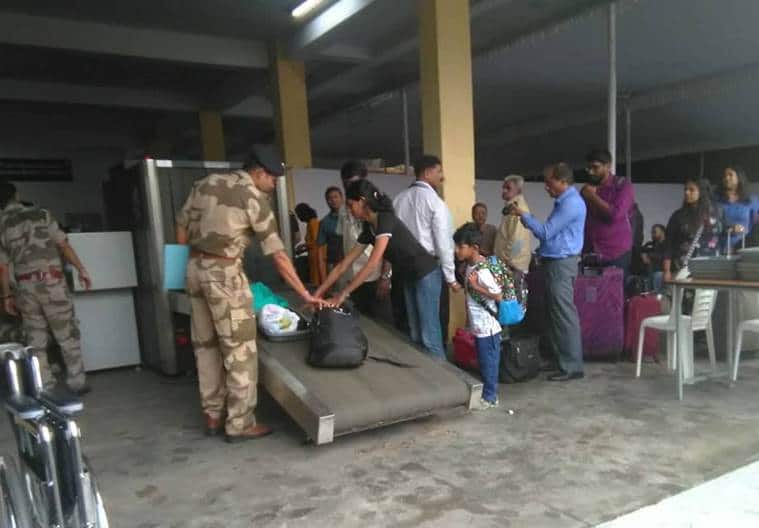 Watch | An old woman being airlifted by IAF from Ernakulam

#WATCH: A old woman being airlifted by Indian Air Force (IAF) from Ernakulam. She was later taken to Navy Hospital. (19.8.2018) #KeralaFloods pic.twitter.com/6NxOhgfeFD

Chief Minister Mamata Banerjee on Sunday said that West Bengal government will contribute Rs 10 crore to the Kerala Chief Minister’s relief fund in view of the devastating flood in the state. “My heart goes out to the people of Kerala battling #KeralaFloods In this hour of crisis, to stand beside the flood-affected people of Kerala, we have decided to make a contribution of Rs Ten Crore to the Chief Ministers Distress Relief Fund,” Mamata tweeted. READ MORE HERE

Kerala govt to compensate fisherman for assisting in relief works

CM Pinarayi Vijayan announced that the Government will honour fishing workers who were part of the rescue mission. All boats will be granted ₹3000 for each day of their work. Government will also bear the repairing costs of boats damaged during the mission. #KeralaFloods

Maharashtra government has set up a 24×7 Kerala Relief Desk at government headquarters, Mantralay, in Mumbai. The decision was taken by Chief Minister Devendra Fadnavis to expedite the process of providing relief and rehabilitation to flood-ravaged Kerala. A decision has been taken to send a team of 50 doctors, led by Medical Education Minister Girish Mahajan, to Kerala. The team will leave on Monday. The medical team is part of the emergency drive to provide immediate treatment in wake of the fear of epidemic outbreak due to floods. READ MORE 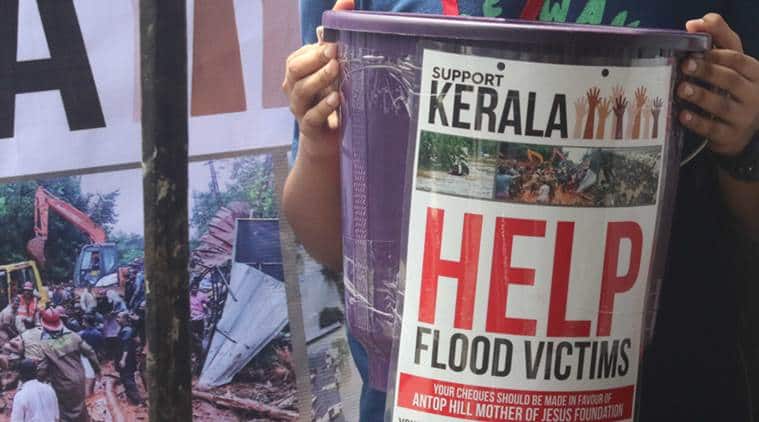 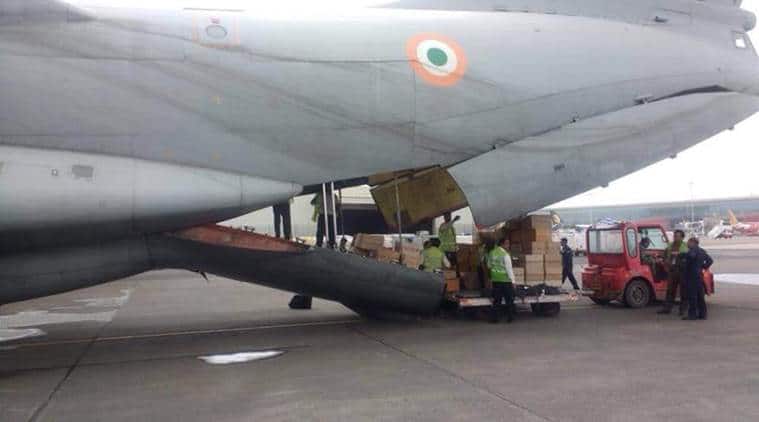 Manipur Chief Minister tweeted: "People of Manipur stand in solidarity with the people of Kerala, may you find comfort in knowing that the rest of India stand with you. The people of Manipur pray for you and extending a sum of Rs 2 crore to relief funds from the state."

Assam CM Sarbanand Sonwal also expressed his grief at the loss of lives & large scale damage to property due to floods in Kerala and announced Rs 3 crore financial assistance to the Govt of Kerala for rescue & relief operations.

People performed special 'havan' in Kanpur for the people affected due to flood in Kerala, earlier today. #KeralaFloods pic.twitter.com/OVhS1n9Eqr

An imposter allegedly adorned the Indian Army uniform and has been spreading misinformation regarding the IAF efforts across Kerala.

TVS &Sons CEO Mr.Raghavan handed over Rs 1 crore to CM Pinarayi Vijayan today at Trivandrum along with two containers that are coming from Madurai with food and basic amenities.

Palakkad locals are reconstructing the main road in a village

Indian-origin billionaire businessmen based in the UAE have announced Rs 125 million donation for flood relief operations in the deluge-hit Kerala, according to a media report stated PTI. Nearly 200 people have lost their lives in Kerala since August 8 due to floods caused by rains and landslides, while over 3.14 lakh people have been moved to relief camps.

Train services expected to be restored, commercial flights to begin operation from Monday

Two special trains will run tomorrow to Kolkata from Trivandrum & Ernakulam. Train services expected to restore on all lines by tomorrow evening. Commercial flights will start operating from Kochi Naval Base from tomorrow: Government of India #KeralaFloods pic.twitter.com/f9EcJNKFMI

Director General of Police (DGP) OP Singh appeals to UP Police to voluntarily donate one day salary for Kerala flood victims. He says, "Over 300 people have lost their lives in #KeralaFloods. It's a national calamity and we all need to think how we can help the people of Kerala." pic.twitter.com/1KEd0tmYfp

The Dept of Food & Public Distribution has provided 50,000 million tonnes (MT) of food grains. The Dept of Consumer Affairs has made arrangements to airlift 100 metric tonnes of pulses by tomorrow with additional quantities to be sent by train: Government of India #KeralaFloods

The Manipur government on Sunday donated Rs 2 crore as flood relief for the victims of Kerala hit by days of incessant rainfall and massive floods. "People of Manipur stand in solidarity with the people of Kerala, may you find comfort in knowing that the rest of India stand with you. The people of Manipur pray for you and extending a sum of Rs 2 crore to relief funds from the state, Chief Minister N Biren Singh said.

External Affairs Minister Sushma Swaraj took to Twitter to announce that all passports damaged in the Kerala floods will be renewed free of cost by the central government.

There are unprecedented floods in Kerala causing huge damage. We have decided that as the situation becomes normal, passports damaged on account floods shall be replaced free of charge. Please contact the concerned Passport Kendras. #KeralaFloods Pls RT

Various political party workers in the state toil relentlessly to provide victims with food, stock and other materials

As per ANI, Seva Bharati, RSS' community service unit is carrying out rescue&relief ops across state. A unit member says 'We stock materials&transport it via trucks&trains.We started this on 15 Aug&will continue as long as it's required'. CPI (M) cadres also continue working in camps to provide relief.

Kerala: CPI(M) cadres, along with Nemmara MLA K Babu, are carrying out rescue and relief operations in Palakkad. #KeralaFloods pic.twitter.com/QUnfmDEIRB

Kerala rains LIVE UPDATES: Rescue workers search for the bodies of missing persons after a landslide, triggered by heavy rains and floods, at Nenmara in Palakkad on Friday, Aug 17, 2018. (PTI Photo)

Heavy rains are battering the state as the southwest monsoon advances through the country. While the intensity of rainfall activity reduced over Kerala on Friday, the IMD has predicted heavy to very heavy rains in isolated places on Saturday.

Meanwhile, between June 1 and August 17, the state received a cumulative rainfall of 2,306.88 mm, compared to the normal 1,634.5 mm — an excess of 41.12 per cent. Idukki district, among the most severely affected areas, recorded nearly 90 per cent excess rainfall. Since May, 285 people have died in rain-related incidents. The National Disaster Response Force (NDRF) has rescued over 4,000 people while the Navy has rescued 400.

The Chief Minister Friday said rescue operations are progressing well despite the inclement weather. At least 82,442 people were rescued on Friday. There are 3,14,391 people from 70,085 families who have been shifted to relief camps. There are nearly 2,100 camps across the state. This is the worst flood in 100 years, Vijayan reiterated, adding that the road to recovery is going to be a long one.

Among the severely affected districts are Ernakulam, Pathanamthitta, Alappuzha and Thrissur, where the situation remains "grave".

Chief Ministers from across the country have announced aid for Kerala, including Delhi CM Arvind Kejriwal and Andhra CM N Chandrababu Naidu. The two CMs have announced financial assistance of Rs 10 crore. The Karnataka and Tamil Nadu governments had previously sent aid to Kerala. Read highlights on the Kerala floods here.