Three days after a team of four Sikh volunteers from the UK- based philanthropist group Khalsa Aid reached flood-hit Kerala and setup Guru da langar (community kitchen) at Kochi for some 3,000 people, they have expanded langar relief and now fresh meals are being served to at least 13,000 people twice a day.

A group of five more volunteers reached Kochi via Trivandrum Monday. In another positive development, Sikh volunteers, joining hands with Kochi administration, have also taken over the kitchen at Rajiv Gandhi Indoor Stadium at Kochi which is government’s central food supplies centre for relief operations in Kerala. Khalsa Aid is now preparing meals at stadium’s kitchen which are being transported for distribution at relief camps. Food being prepared at the langar for Kerala flood victims. (Express photo)

Apart from this langar kitchen at the stadium, food continues to be prepared at a relief camp (Assisi Vidyaniketan Public School, Perumpilly in Kochi) from where they started Friday. Apart from this, volunteers are also preparing special food for people in areas where chicken-pox outbreak has been reported.

Speaking to The Indian Express, Amarpreet Singh, Asia Pacific managing director of Khalsa Aid, said, “We have taken over the kitchen at Rajiv Gandhi Indoor Stadium in Kochi which is government’s central collection centre for food supplies relief coming from several states. They had raw materials but no one to cook food so we have been given charge of food. Now fresh meals are being prepared twice a day and being transported to different camps for distribution. Also, in some area chicken-pox outbreak has been reported and we received special demand for light and hygienic food for patients. We prepared khichdi with less spices for them.” 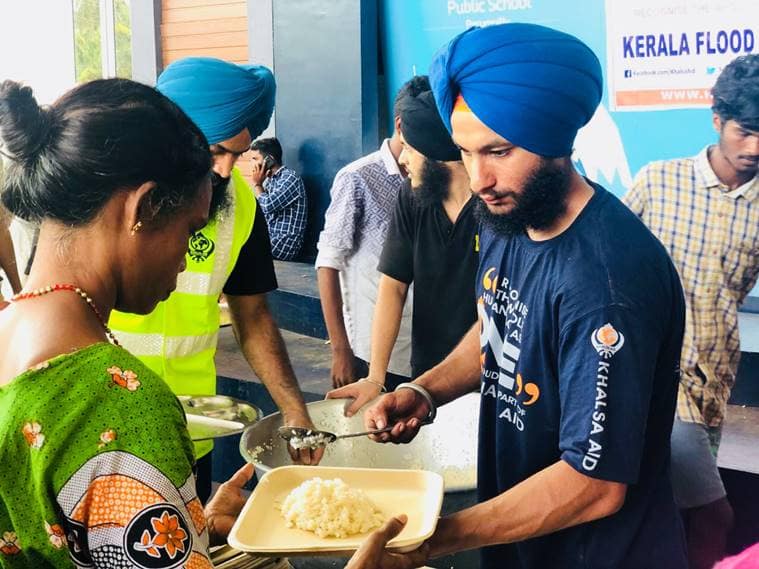 Volunteers are also preparing special food for people in areas where chicken-pox outbreak has been reported. (Express Photo)

“The collection centre is full of food supplies and cereals like wheat, rice but other things like vegetables, spices and utensils have been purchased by us. The administration needed someone who can use those supplies and cook food for people. We are doing that now. Since Sunday, meals are being prepared at stadium kitchen continuously. So, almost 70 per cent of our raw material requirement is being completed from supplies at the centre and rest 30 per cent we are buying from market,” he added.

“We will continue langar sewa in Kerala till there are people who will need food. As per Guru’s teachings, we cannot let them sleep hungry. We want people’ support in this as we are completely dependent on donations,” said Singh to The Indian Express.