PDP-BJP alliance to stay, but Mehbooba warns of ‘chaos’ if Valley’s youth not heard

Chief Minister Mehbooba Mufti on Saturday warned that the Valley was headed for “chaos” if measures were not taken to contain the anger and discontent of its youth. 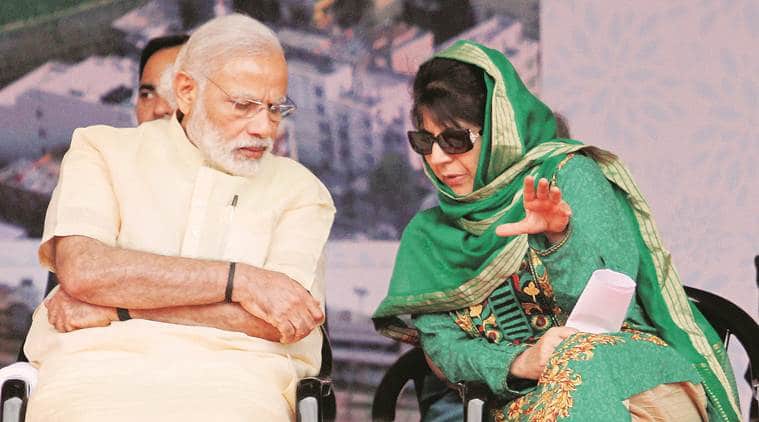 While settling doubts over the future of her coalition government in Jammu and Kashmir following the resignation of two BJP ministers, Chief Minister Mehbooba Mufti on Saturday warned that the Valley was headed for “chaos” if measures were not taken to contain the anger and discontent of its youth.

Speaking at a meeting with her PDP leaders, ministers and legislators here, lasting over three hours, Mehbooba said, “The youth here have given enough indication of their anger and discontent over the past several years, even while they gave a chance for democracy to play itself out. But unfortunately, signals were ignored, with the country’s political leadership having either run out of ideas or having reached a dead end. The democratic polity of India must respond to this challenge before the political and humanitarian crisis in Kashmir degenerates into bigger chaos.”

At the same time, the PDP termed the resignation of two BJP ministers in the matter of the Kathua rape-and-murder case as a confidence-building measure that would strengthen the alliance.

The BJP reciprocated, with its general secretary and J&K in-charge Ram Madhav addressing a press conference in Jammu saying they had forwarded the resignations to Mufti, while clarifying that its leaders were only guilty of “indiscretion”. It also claimed credit for speedy investigation in the Kathua case.

Addressing the media after the PDP meeting, senior party leader and minister Naeem Akhtar said, the party also appreciated the “support and solidarity” extended by the country for the eight-year-old Kathua victim, and hoped for similar support to resolve the political issues of J&K. “The way the people of this country adopted (the girl), the way they raised their voice, the way they helped us uphold the credibility of the investigation… The party will fail in its duty if we don’t express our gratitude… We expect the same attitude, irrespective of party affiliations, irrespective of ideological affiliations, to look at the restlessness of our youth, to look at the issues of our youth, at the political issues from a humanitarian angle, and join hands to help us heal the wounds.”

The PDP meeting was addressed by several party leaders, including Mehbooba’s brother and Minister Tassaduq Mufti, who had set off a storm with his remarks to The Indian Express on Thursday that allies PDP and BJP had “ended up becoming partners in crime”.

Sources said that in his address, Tassaduq reiterated his position, and asked party members to look within and reach out to the people. “Our party has a political agenda, which we can’t ignore,” sources quoted Tassaduq as saying. “We shouldn’t just look towards the Centre and Pakistan. We also need to reach out. We need to start grass-root activity, convince people of our agenda and policies.”

Other party leaders expressed concern over the civilian killings in the Valley. “They called for better coordination between civil and military officials so that there is no killing of innocents,” said a leader.

In her remarks, the CM said, “Intolerance and hate are hitting at the country’s core values and posing great threat to pluralism, the only option for achieving the goals India has set. India comprises a composite culture and no one has domination in it. We have to keep this civilisation alive.”

Akhtar said they appreciated the BJP “support” in getting its ministers to resign. “The Prime Minister, Home Minister, Ram Madhavji and Amit Shahji, they played a role and sought the resignation of two BJP ministers, about whom it came in the media that they didn’t play a positive role. That was a confidence-building measure. And if the PDP and BJP continue to solve their problems in a similar way, there would be no substitute to this alliance.”

The minister added that the Kathua rape and murder developments had created an “emotional bond” between J&K and the rest of the country. “We want this bond to be strengthened. If the people of the country understand that the people of Kashmir are not monsters, (if they understand) they are not their enemies… they are our own people, I think we can take forward the process of reconciliation.”

Akhtar, however, backed what Tassaduq had said, on the PDP and BJP “being partners in crime”. “Whatever Tassaduq Mufti sahib said, that represents an emotion. That represents, in fact, the pain of this place. As I said, the cure to this pain is a support similar to that the entire country gave us in the Kathua case. People (of India) should support us, irrespective of the government, irrespective of the government that rules in Delhi or Jammu and Kashmir. We believe that till people of India don’t understand our humanitarian problems, our wounds, it wouldn’t happen.”

In Jammu, senior BJP leader Ram Madhav, who addressed a press conference with Deputy CM Nirmal Singh of the party, insisted that the motive of its two ministers, who resigned on Friday, in joining the Hindu Ekta Manch protest in support of the Kathua accused was to “dispel misgivings about investigations and reassure people that there will be no harassment of any innocent”. However, he added, “Certain amount of discretion should have been maintained. Sometimes, lack of discretion does not amount to a tilt, but the lack of discretion led to a misconception even about the ministers, and that is why they decided to step down.”

Madhav hoped that this meant there was no threat to the BJP’s coalition with the PDP. “We have done our bit to address or allay fears and misconceptions in the minds of the people not only in Jammu or Kashmir but also the entire country by asking our two ministers to tender their resignation.”

In an apparent reference to Tassaduq’s remarks, he added, “Rest of the byanbaji (statements) we have been hearing on a daily basis in the last few days, I will wait for the PDP to take a view on that and convey what is the view of the leadership. Then we will see.”

The BJP leader also stressed that its ministers had not resigned under pressure from the PDP. “Nobody dictates any agenda to us,” he said. “We both are equal and responsible partners and we are neither dictated by anybody nor anyone dictates to us. We work together for the welfare and betterment of Jammu and Kashmir.”

Claiming that it was because of the BJP that the chargesheet had been readied against the Kathua accused on time, Madhav said it showed that there had been no attempt to create obstacles in the inquiry. “Our party stood by the government on the issue of investigation,” he said. Incidentally, BJP ministers had jointly called on Mufti to try to persuade her to hand over the case to the CBI.

Madhav said the brutal rape and murder had “shaken the conscience” of the nation, and said parties, especially the Congress, “should not bring politics or religion into it”.

He denied that party leaders had played any role in the Hindu Ekta Manch agitation. BJP state secretary Vijay Sharma, who led the Manch, “is no more our office-bearer”, he said.

About the BJP’s position on deportation of Rohingya from Jammu and a drive to remove nomads including Bakerwals from forests and government land, Madhav said, “We have a clear and consistent stand on both the issues.”

In what may remain a thorny issue with the PDP though, he added that the BJP had told the Mufti government to withdraw its directive on the encroachment by nomads. The state government had earlier told the police and administration to not provide “police protection” for anti-encroachment drives against tribal population without prior approval of the Tribal Affairs Department. Some elements in Jammu have projected this encroachment as an effort to “change the demography of Jammu”.