The 39 MoUs were signed Monday at the Jammu and Kashmir Real Estate Summit 2021, the first of its kind in the region. 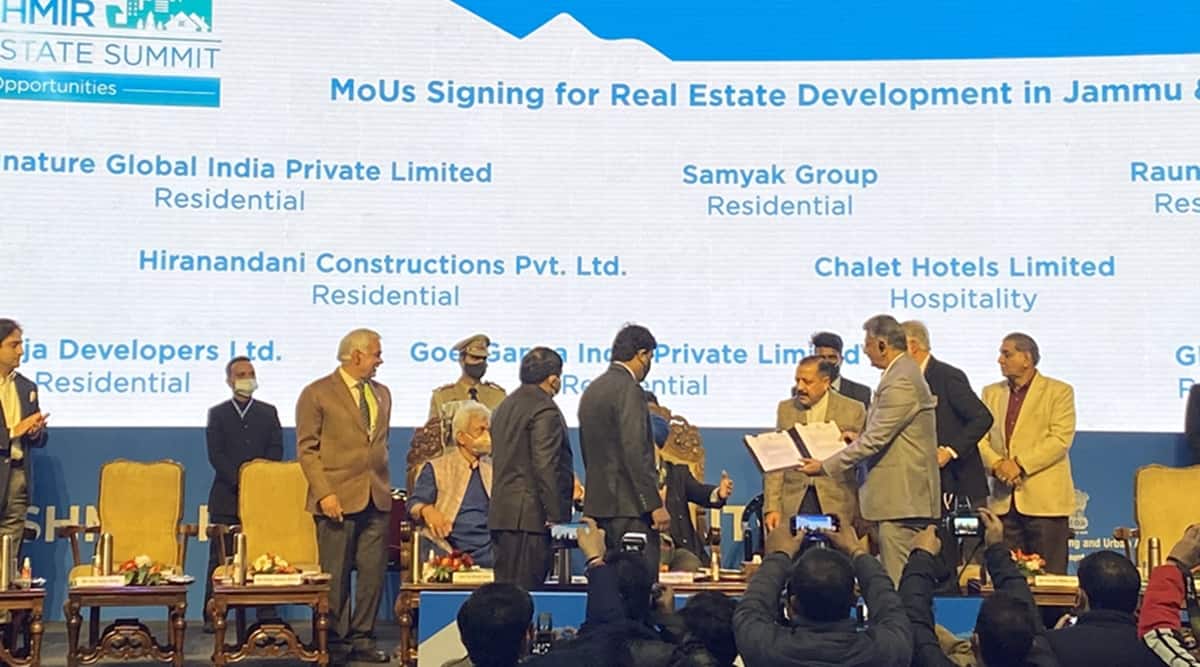 While the Jammu and Kashmir administration has termed the signing of real estate MoUs worth Rs 18,900 crore a “historical transformation”, political parties across the mainstream-separatist spectrum in the Kashmir Valley are viewing it as an attempt to alter the region’s demographic identity.

The separatist Hurriyat Conference has called the summit a step towards “demographic change”. The Peoples Democratic Party (PDP) said it was “brazen loot”. The National Conference, meanwhile, said Jammu and Kashmir is being “put up for sale”.

The Govt signed 39 MoUs worth Rs 18,300 cr for investments in residential, commercial, infrastructure and film sectors to foster the growth & development at first-ever ‘Real Estate Summit, 2021′.

The 39 MoUs were signed Monday at the Jammu and Kashmir Real Estate Summit 2021, the first of its kind in the region. Nineteen of these MoUs were related to the residential sector, eight were for commercial projects and four were for hospitality. There were three MoUs for infrastructure, two for finance and three for the film and entertainment sector.

The Jammu and Kashmir administration termed it a “historical transformation” and encouraged people from different parts of the country to buy land or second homes in the Union Territory.

This had led to the fears of demographic change in Jammu and Kashmir. Before the abrogation of Jammu and Kashmir’s special status, only state subjects could buy land or immovable property there.

PDP spokesperson Suhail Bukahri said: “What happened on August 5, 2019 was not the end in itself. In fact, that was beginning of a process to disempower and disenfranchise the people of Muslim majority state. Their (BJP and RSS) eyes are set on the land of Jammu and Kashmir, on our resources, on our minerals. These orders that come one after the other are an attempt towards completion of their agenda.”

“J&Ks special status was illegally revoked to dehumanise, dispossess & disempower the only Muslim majority state in India. GOIs brazen loot and sale of our resources shows that the sole motive is to annihilate our identity and change the demography,” Mufti tweeted.

The Hurriyat Conference sought the intervention of the international community. “The government of India wants to change the demographic character of Muslim majority J&K and disempower its residents through such diktats and measures in order to scuttle the final resolution of the long-standing international political dispute of Kashmir in accordance with the will and aspirations of its people as promised by the international community…,” said the separatist conglomerate led by Mirwaiz Umar Farooq. “Since August 2019, in succession one after another authoritarian laws and diktats have been implemented in J&K towards this end. To facilitate the electoral prospects of the ruling party in India, J&K has become its favourite whipping boy.”

Former Chief Minister and National Conference Vice President Omar Abdullah tweeted: “Once again the true intentions of the government are brought to the fore. While offering to secure the land, jobs, domicile laws and identity of the people of Ladakh, J&K is being put up for sale. People of Jammu should beware, ‘investors’ will buy up land in Jammu long before Kashmir.”

The Altaf Bukhari-led Apni Party said while the development of Jammu and Kashmir is welcome, it should not be at the cost of domicile laws.

“Our party will always welcome any effort that will foster progress and prosperity in Jammu and Kashmir. But at the same time we are pledged to resist any plans that will do away with the exclusive rights of the people on their land and jobs,” Bukhari said. “Apni Party wants to make it crystal clear that we will always resist any such proceedings that are against the domicile law in J&K.”