DMK patriarch M Karunanidhi was buried next to mentor CN Annadurai with state honour on Wednesday. The family performed last rites at the beach. Leaders and supporters paid their final respect. The five-time chief minister passed away on Tuesday at the age of 94. The veteran politician was admitted in Kauvery Hospital in the city two weeks ago, where he was being treated by a panel of expert doctors. His body was taken to his Gopalapuram residence last night, after which it was shifted to Rajaji Hall. Several political leaders, including Prime Minister Narendra Modi, paid their last respects to Karunanidhi.

The Madras High Court granted permission to bury Karunanidhi behind Anna Samadhi — the memorial of C N Annadurai — on Marina beach. This comes after several arguments against or in favour of the matter in the court. The order led to emotional scenes at Rajaji Hall, as Karunanidhi’s son Stalin and senior leaders broke into tears. The Madras High Court which held a late-night hearing on a plea by DMK’s lawyers took up the case at 8 am this morning.

Photo Gallery | Karunanidhi passes away: Rare and unseen photos from his political journey The stature of #Karunanidhi has been grand in the politics of South India. He was always seen as a dravid yodha. Like Bal Thackeray in Maharashtra, Karunanidhi was an eminent leader in Tamil Nadu: Sanjay Raut, Shiv Sena pic.twitter.com/zdzdsZdDS0

Puducherry to mourn for seven days

The Congress government in Puducherry today extended three-day mourning to seven days following the death of DMK leader M Karunanidhi. A cabinet meeting chaired by Chief Minister V Narayanasamy took the decision to extend the period of mourning to seven days instead of three as announced earlier. Narayanasamy said a bronze statue of Karunanidhi would be installed in the union territory as per a decision was taken by the cabinet. 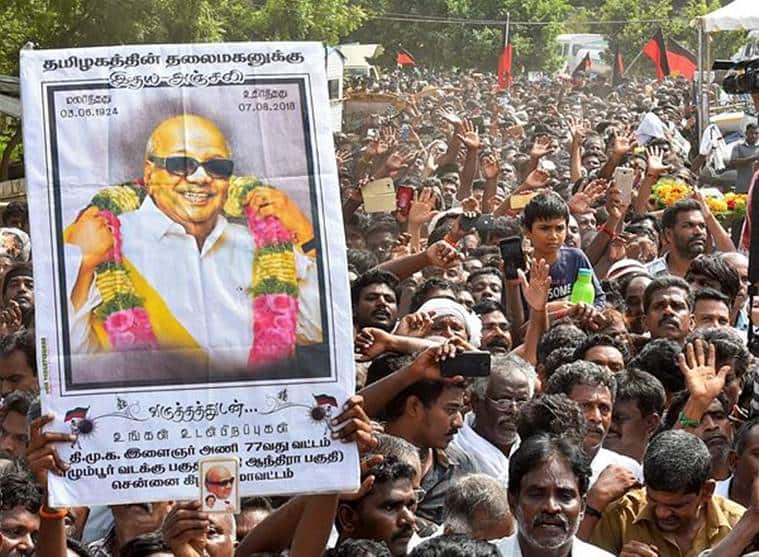 Funeral processions for M Karunanidhi have begun. The mortal remains of the departed are being taken to the Marina Beach from Rajaji Hall.

Preparations for M Karunanidhi's burial have begun. The funeral will be executed at 4 pm. The DMK patriarch will be buried near Anna Samadhi — the memorial of his mentor C N Annadurai. 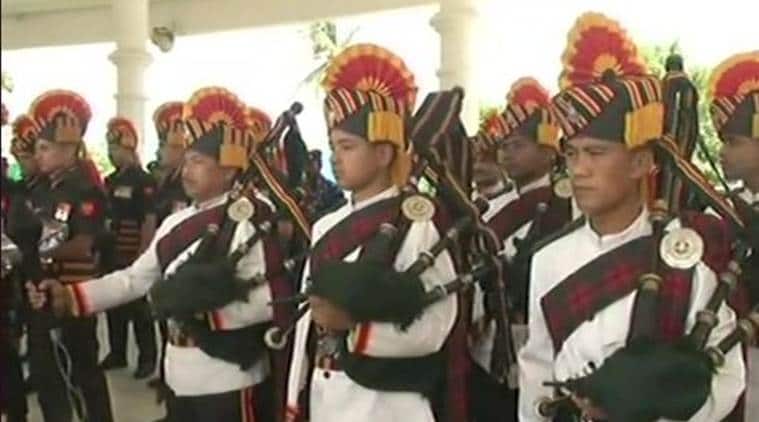 Sri Lankan President Maithripala Sirisena, his predecessor Mahinda Rajapaksa and several other political leaders in the country express sorrow at the demise of Karunanidhi. "The death of M Karunanidhi, former Chief Minister of Tamil Nadu and senior politician, deeply disturbed me. I express my deepest sympathy for everyone, including his family and supporters who have been saddened by the loss of Anna," Sirisena tweeted.

Deeply saddened by the demise of former Chief Minister of Tamil Nadu, Kalaignar Karunanidhi. His contributions to Tamil literature, cinema, & politics are unparalleled. I join the millions of people who are mourning. My deepest condolences to the family & people of Tamil Nadu.

MK Stalin addresses the crowd outside the Rajaji Hall and asks them to maintain calm. "Those who are in power are trying to create chaos, but you have all shown the strength of the cadres." 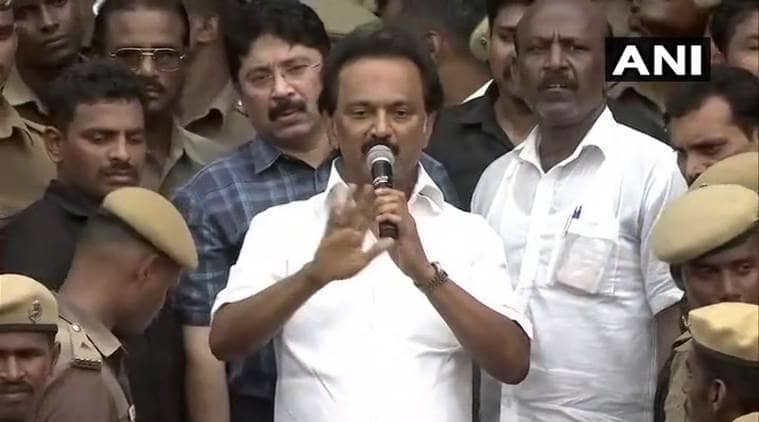 Scuffle breaks out between Police, crowd gathered at Rajaji Hall in Chennai

Kalaignar Karunanidhi will live on in the hearts and minds of millions, says PM Modi

In Chennai, I paid tributes to an extraordinary leader and a veteran administrator whose life was devoted to public welfare and social justice.

Kalaignar Karunanidhi will live on in the hearts and minds of the millions of people whose lives were transformed by him. pic.twitter.com/torAPw1gUe 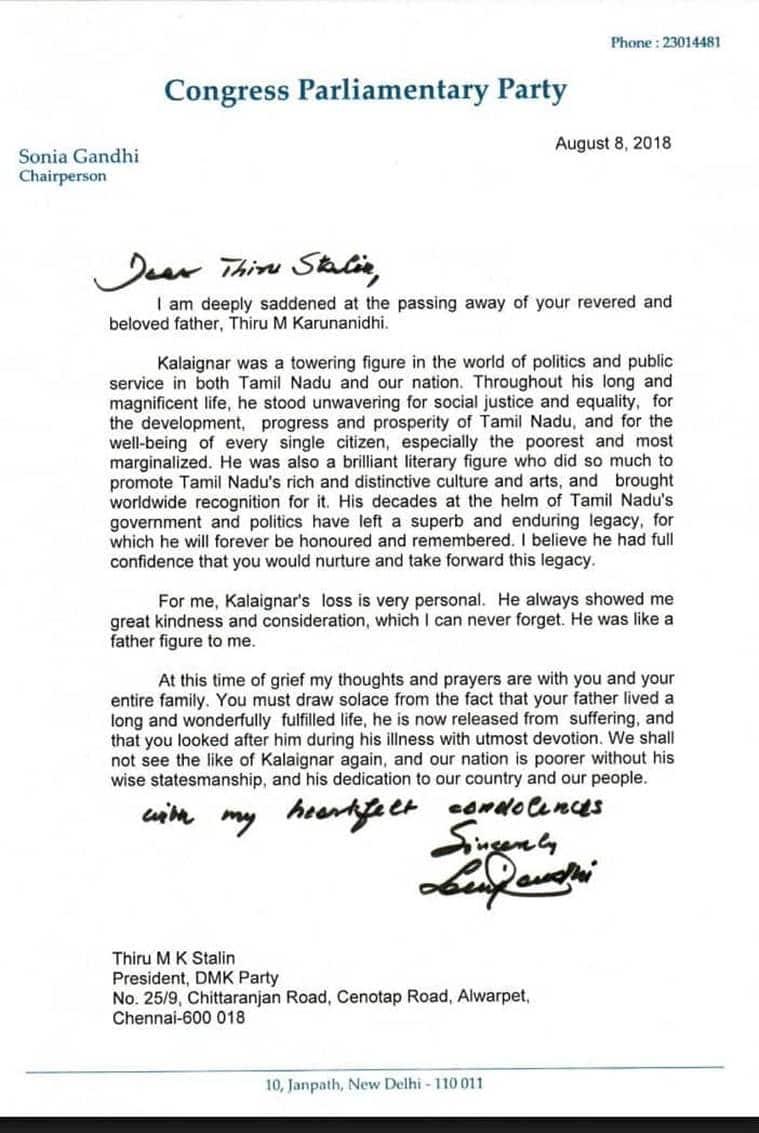 West Bengal Chief Minister Mamata Banerjee said, "I was unhappy yesterday, as the govt did not allow the Marina beach burial. I had called the CM but he was unavailable. I also personally called the PM in this regard. Yesterday, I had gone to their residence to pay tributes to Karunanidhi ji. He was the senior most leader and politician, legendary figure. So, it is a great loss." Parliament adjourned today as mark of respect for Karunanidhi

Both Rajya Sabha and Lok Sabha have been adjourned for the day as a mark of respect for the five-time chief minister of Tamil Nadu, M Karunanidhi. A slew of politicians including Narendra Modi, Rahul Gandhi, Arvind Kejriwal are expected to pay their tribute to the DMK chief.  Adjournment of Parliament for Karunanudhi is unprecedented. It has never been done for a former CM. Was done for Jayalalithaa who was a sitting CM.

'With profound sorrow, I've to inform the House about the sad demise of Karunanidhi, who passed away on August 7, 2018. He served as CM of Tamil Nadu for five times. In his demise, the country has lost highly popular and eminent personality,' Lok Sabha Speaker Sumitra Mahajan said.

Rahulji strongly supported the idea of a memorial for Karunanidhi at Marina.
Why are Central/State Govts silent?

Karunanidhi passes away: The mortal remains of DMK chief M Karunanidhi are carried to his home in Chennai on Tuesday night. (PTI Photo)

Meanwhile, lawyer of Traffic Ramaswamy said, "We have no objection to the burial land for Karunanidhi." Ramaswamy is one of the five petitioners who had filed a public interest litigation against building memorials at the Marina beach. While four others have already withdrawn their petition, Ramaswamy's PIL is still pending before the high court. The acting Chief Justice responded to the lawyer, saying, "Withdraw your case," reported ANI.