According to the state election commission, BJP secured 929 seats while JD(S) won 325 seats in the elections which were held on August 31. The remaining seats were bagged by the Independents and others.

Karnataka urban local body election 2018 LIVE: The Congress and JD (S) did not rule out on forming a post-poll alliance to keep the BJP out of power. (Source: ANI)

Karnataka urban local body election 2018 LIVE: Counting is underway for the 105 urban local bodies (ULB) across Karnataka that went to polls on August 31. The polls registered a record turnout of 68 per cent for elections to the 2,709 civic wards spanning 29 city municipalities, 53 town municipalities, 23 town panchayats and 135 wards at Mysuru, Shivamogga and Tumakuru city corporations.

A total of 8,340 candidates, including 2,306 from the Congress, 2,203 from the BJP and 1,397 from the JD-S contested in the urban local body elections. The Congress and JD (S) did not rule out on forming a post-poll alliance to keep the BJP out of power. “In the event of either party not getting majority on its own in the ULB elections, we will have post-poll alliance to rule the local bodies as we did to form the coalition government in the state after the May 12 assembly election threw a hung House with a split verdict,” a JD(S) official told IANS on Saturday.

Results for 105 Karnataka urban local bodies will be announced today. Track this space for LIVE UPDATES.

Pinning the blame on Congress-JD(S) coalition, BJP state unit President BS Yeddyurappa said, "The BJP should have won more seats but we could not perform the way we wanted to because of the Congress-JD-S coalition." The party, however, is confident of winning a majority in the 2019 Lok Sabha election, he said. "People's mandate is with the BJP and we are confident of a majority in the next year's general election," he added.

People of Karnataka have once again reposed their faith in Congress by making it the No.1 party in Urban Local Bodies.

People have accepted development policies of Congress+JDS Govt & have rejected Jumlas of BJP.

Reacting to the results, JD(S) chief HD Deve Gowda said, "We have succeeded. JD(S) and Congress will work together to keep BJP at a distance."

We have succeeded. JDS and Congress will go together to keep BJP at a distance: Former PM HD Deve Gowda on #KarnatakaLocalBodyElection2018 pic.twitter.com/ZOgaEwrASc

Counting of votes is over and the final results have been declared: Congress has won the ULB polls with 982 seats. 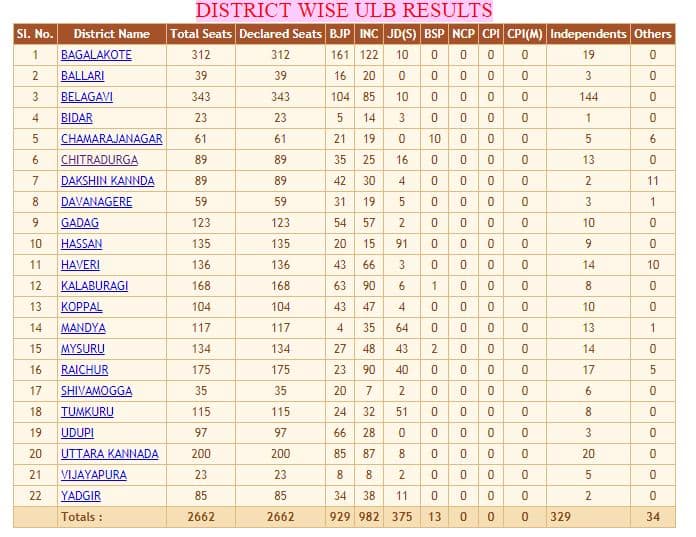 The BJP had ended up as the single largest party in the assembly polls but had failed to muster numbers to form the government, which paved the way for the Congress and JD(S) to stitch an alliance and take over the reins of administration.

These elections were considered a popular test of the Congress-JD(S)coalition government which was formed post-May assembly polls which had yielded a hung verdict and also was an indicative of the voters' mood before the Lok Sabha elections.

Both the Congress and the JD(S) contested the polls separately despite being partners in the state government, but they have already declared that they would tie up post-election in urban bodies.

In Pics: 8 people hurt in acid attack in Tumkur

Meanwhile, in Tumkur, eight people have been injured in an acid attack on a victory procession of Congress candidate Inayatullah Khan, ANI reported. More details awaited.

Counting for the City Corporations has ended. While the BJP has bagged 54 seats, Congress has won 36 seats. It is a neck-and-neck fight, elections are based on minor issues, says Mallikajun Kharge

Congress is not lagging behind. Neck-to-neck fight is there & if you combine secular votes, they are the most. These elections are based on minor issues & local candidates & these results don't hold much significance: Mallikarjun Kharge on Karnataka urban local body polls results pic.twitter.com/5wXys8efmm— ANI (@ANI) September 3, 2018

The BJP only managed to win eight seats in Kuditini and Kottur respectively.  A total of three independents also won from Kottur.

BJP ahead in City corporations results

So far results of seats out of 135 seats for City Corporations of Mysuru, Shivamogga and Tumkuru have been announced. The BJP leads with win at 31 seats, followed by Congress (20) and JDS (19)

The JD-S is also ready to support the Congress in the local bodies where it will fall short of majority so as to keep the Bharatiya Janata Party (BJP) from ruling them.

"We are expecting to secure majority in many city and town municipalities across the state though we contested against the JD-S and the BJP. We hope the JD-S will reciprocate our gesture to support it in forming the coalition government in the state," a Congress spokesman told IANS here.

"Though the coordination committee of the alliance partners discussed the prospects of post-poll tie-up in ULBs, a decision to that effect will be taken after all the results of the wards are declared by Monday night," added the Congress official.