While the BJP is yet to stake claim to form the government, caretaker Chief Minister H D Kumaraswamy said that no one can provide a stable government in the state in the present political scenario. “Whether you focus on the developmental activities or the bye-elections at 20 to 25 places, an atmosphere created by the BJP? We cannot assume that the government will remain stable even after the elections,” Kumaraswamy was quoted as saying by PTI.

The Supreme Court, meanwhile, allowed two independent MLAs to withdraw their plea seeking a direction to the assembly Speaker to conduct “forthwith” a floor test on the H D Kumaraswamy government’s trust move.

'Disqualified members cannot contest or get elected till end of term'

Resignation is a respectable terminology, disqualification is "admonishing", the Speaker said. He added that the cases of 14 other rebel MLAs will be decided in the next couple of days. Disqualified members under the anti-defection law cannot contest or get elected till the end of the term of the house, he said.

The Speaker also disqualified rebel Congress MLAs Ramesh Jarkiholi from Gokak (Belagavi) and Mahesh Kumathalli from Athani (Belgaum)  "with effect from now till the expiry of the 15th legislative assembly of Karnataka".

JUST IN| Karnataka Speaker Ramesh Kumar announces disqualification of independent MLA R Shankar from the Vidhana Soudha "with effect from now till the expiry of the 15th legislative assembly of Karnataka." @IndianExpress pic.twitter.com/7fgGBGB2cu

Responding to a question on BJP meeting him, Ramesh Kumar said, "they had come -- today date is 25 (July), by 31st if we don't pass the Finance bill government will come to a standstill and we will not be in a position to even pay salaries, such a necessity has come, what to do?" "I have said, as soon as the government is formed and whenever those forming the government say the assembly should be convened, within 48 hours we will call a session so that the work can go on," he added.

Stating that there was no more option for MLAs to appear before him, he said that process was over. "I had called them and they did not come, their lawyers had come and have said what they had to, it is a closed chapter," he added. Not specifying on the next course of action, Kumar inresponse to a question said, when MLAs resign according to article 190 (3)(b) and 35th amendment to the Constitution, the Speaker can call them for inquiry. "I had called, they did not appear, that's all," he said.

Will uphold faith placed in me by SC, Karnataka assembly speaker

Karnataka Speaker K R Ramesh Kumar, who is yet to decide on the resignation and disqualification of the rebel Congress-JD(S) MLAs, said that he would use his discretion and uphold the faith the Supreme Court has placed in him. He said there was no further opportunity for the rebel MLAs to appear before him and it was a closed chapter now, adding, "law is same for everyone whether it is a labourer or President of India." "Yes..the court has left to my discretion (to decide on resignation), I have discretion, I will work accordingly andwill uphold the faith that the Supreme Court has expressed in me," Kumar said.

Rebel Karnataka MLAs may return to Mumbai for brief stay

The rebel Karnataka MLAs, who had been camping in Mumbai before they flew to New Delhi earlier this week for appearance in the Supreme Court, will either return to Mumbai for a brief stay or fly directly to Bengaluru, sources told PTI. "Their role in Mumbai is technically over. They may either fly back directly to Bengaluru (from the national capital) or come down to Mumbai for a brief stay," their coordinator told the news agency. "The picture will be clear by today evening about their Mumbai visit," he added. According to sources, 15 rebel MLAs from the Congress and JD (S) were camping at Hotel Renaissance in Mumbai.

'Time will answer everything': Siddaramaiah

Recalling his days as chief minister, Siddaramaiah said there were many baseless allegations against him - "a venom he digested to serve people with good intent." "Time will answer everything! Satyameva Jayathe!!" Siddaramaiah said.

There were numerous baseless allegations on me even when I was @CMofKarnataka. This is not the first & will not be the last but I have digested this venom to serve people with good intent.

Time will answer everything!!

Taking to Twitter, the Congress strongman said the rebels were trying to "shift the blame on me but the facts would surface once the dust settles." "Media houses are reporting that few rebel MLAs have claimed that I instigated them to resign and destabilise our government. This is nothing but a false allegation with malafide intention. I will give them a befitting reply if theyrepeat the same in front of me," Siddaramaiah said. He said, "The rebel MLAs are trying to shift the blame on me after widespread public backlash against them for betraying and back-stabbing both the electorate and the party. Everything will be clear when the dust settles but by then they would have bitten the dust."

Media houses are reporting that few rebel MLAs have claimed that I instigated them to resign & destabilize our govt. This is nothing but a false allegation with malafide intension.

I will give them a befitting reply if they repeat the same in front of me.
1/3@INCKarnataka

Meanwhile, senior Congress leader and former chief minister Siddaramaiah rubbished reports he had instigated the rebels to resign and destabilise the coalition government headed by Kumaraswamy. Cautioning media houses against peddling "false news", Siddaramaiah said he would give them a befitting reply if they repeat the allegation in front of him.

A group of BJP leaders met party chief Amit Shah this afternoon. Karnataka BJP leaders, including Jagdish Shettar, Arvind Limbavali, Madhuswamy, Basavaraj Bommai and Yeddyurappa's son Vijayendra, met Shah as they discussed the development in the state and explored the options ahead for the party.

No one can give stable govt in present circumstances: Kumaraswamy

Karnataka caretaker Chief Minister H D Kumaraswamy Thursday said that no one can give a stable government in the state in the present political scene after the fall of his ministry two days ago. Kumaraswamy said the resignations by the rebel MLAs of the Congress-JDS coalition had pushed the state towards by-elections. "Whether you focus on the developmental activities or the by-elections at 20 to 25 places, an atmosphere created by the BGP? We cannot assume that the government will remain stable even after the elections," Kumaraswamy said as quoted by PTI.

Two days and no govt in Karnataka

With the fall of the HD Kumaraswamy government following a trust vote on Tuesday, the BJP, the single largest party in the assembly, is expected to form the government. There is still no clarity, however, on the strength of the House, since the Speaker is yet to rule on the resignations of 16 MLAs; their party leaderships have sought their disqualification. It is likely that the Speaker’s action, whichever way he rules, may be challenged in court.  Read more

Final decision on Karnataka to be taken in Parliamentary board meeting: BJP leader Jagadish Shettar

After the first round of meeting with Home Minister Amit Shah and JP Nadda regarding the political scenario in Karnataka, Senior BJP leader Jagadish Shettar said, " there will another round of discussion at 3 pm and then a final decision will be taken in the Parliamentary board meeting." 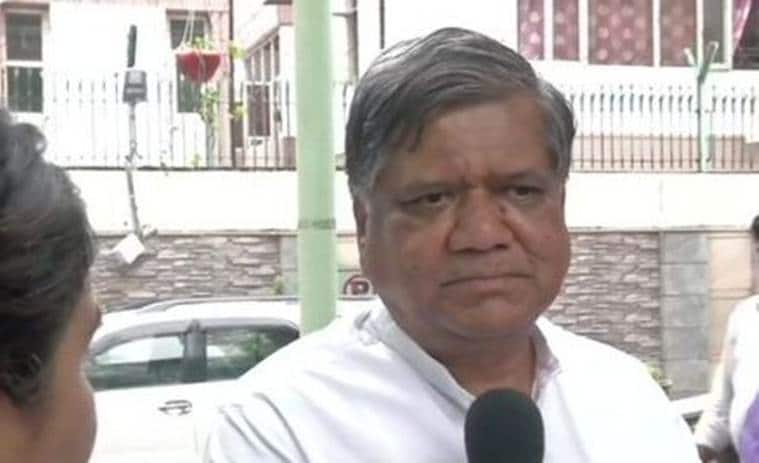 The Independent MLAs had moved the apex court, saying the state has plunged into political crisis after they withdrew their support to the JD(S)-Congress government and 16 lawmakers of the ruling coalition tendered their resignations. The legislators accused the government of taking advantage of the logjam and making several executive decisions like transferring of police officers, IAS officers and other officials.

With floor test done, SC allows the 2 MLAs to withdraw their plea.

“When it comes to urgent mentioning, they come at 2 pm, late night...But when we want, they don’t”. @IndianExpress https://t.co/VOOTqhFWIr

No objection to request by MLAs to withdraw plea pending in the Court: Karnataka Speaker tells SC

Karnataka Assembly Speaker told the Supreme Court that he has no objection to request by two independent MLAs to withdraw their plea pending before the court. Senior Advocate A M Singhvi for Speaker conveyed this to the bench headed by CJI Ranjan Gogoi. MLAs wanted “forthwith” floor test.

Cong-JD(S) non-commital on future of alliance

A day after the collapse of the Congress-JD(S) government in Karnataka, the coalition leadership, including outgoing Chief Minister H D Kumaraswamy on Wednesday remained non-committal on the future of their alliance. "Let us see...I don't know. I don't know about the stand of Congress leaders for the future...we have not discussed anything yet," Kumaraswamy.

No question of rebel MLAs going back to their original parties: JC Madhuswamy

Senior BJP legislator JC Madhuswamy said, " the rebel MLAs waited for 14 months to settle their issues. Those in power weren't gracious enough to consider their requests. Their bond is spoilt. No question of them going back to their original parties. We've confidence and we are hopeful we will form government in Karnataka." 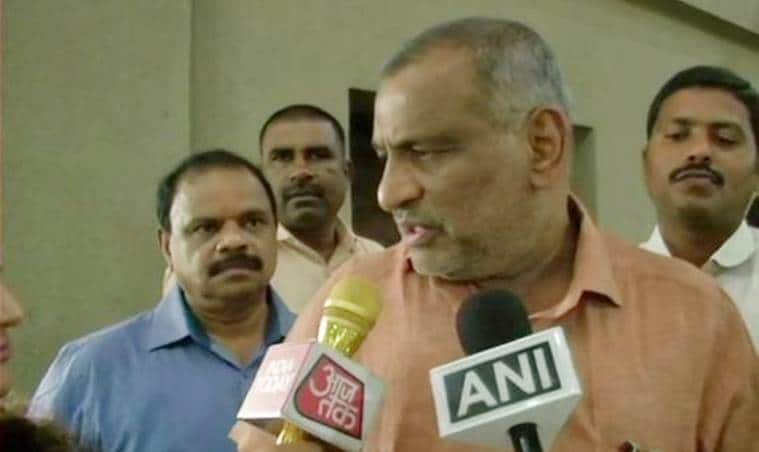 The delegation will meet Home Minister Amit Shah and party working President JP Nadda later in the day to discuss the future course of action to form the government in Karnataka.

Yeddyurappa did not convene a meeting of the BJP legislature party on Wednesday. His remark that he was “awaiting instructions from Delhi” to call the meeting before heading to the Raj Bhavan suggested that the BJP central leadership was in no hurry to form the government.

A senior BJP leader too said: “We are not in a hurry to form the government. We have to settle a number of issues before going ahead with government formation. We want to ensure its stability first.”

Explained | The limits of anti-defection

A disqualified member loses the seat and the punitive action forestalls prospects of becoming a minister in the newly sworn-in government but he or she can get re-elected to the House. A bench headed by Chief Justice Ranjan Gogoi in its order on Wednesday gave the Assembly Speaker the freedom to decide on the resignation of the 15 MLAs within such time-frame as considered appropriate by him.