Kumaraswamy back from US, goes into huddle with Cong to save govt Karnataka CM H D Kumaraswamy arrives in Bengaluru, Sunday, from the US

Karnataka Chief Minister H D Kumaraswamy returned to Bengaluru Sunday night after a 10-day US trip and began holding a series of meetings from the airport itself with leaders of his party JD(S) and its ally Congress in a bid to rescue the coalition government.

The coalition was pushed to the brink Saturday after 13 Congress and JD(S) MLAs submitted their resignations to bring its number to 105, on par with the BJP, in the 224-member Assembly even as several other rebels are reported to be waiting to exit. The resignations of the 13 MLAs, at least 10 of whom have moved to a Mumbai hotel, are yet to be accepted by the Speaker.

In Delhi, BJP sources told The Indian Express that the party is prepared to form an alternative government but will wait for the decision of the Speaker on the resignations, after which it would make a formal move.

“We, in the BJP, are prepared for any eventuality. But we don’t want to rush, we want to watch things closely. We are waiting for decisions of the Speaker and the Governor,” BJP general secretary P Muralidhar Rao told The Indian Express. “Let things become clear, let there be no ambiguity,” he said.

In Bengaluru, among those who received Kumaraswamy at the airport was the chief of a Special Investigation Team (SIT) of the Bengaluru Police, which is probing a ponzi scheme allegedly run by the IMA (I Monetary Advisory) Group of companies in which two government officials are among those arrested.

According to sources, one of the triggers for six Bengaluru MLAs of the JD(S) and Congress to feature among the rebels is a move by the SIT to arrest Assistant Commissioner for Revenue (Bangalore North), L C Nagaraj on July 5 for allegedly receiving a bribe of Rs 4.5 crore from the IMA Group.

The SIT’s preliminary investigations have revealed that at least 40,000 investors lost funds to the tune of Rs 1,000 crore through investments in the IMA Group, whose founder Mohammed Mansoor Khan is absconding.

Meanwhile, amid speculation that the Congress is likely to seek the appointment of veteran leader Mallikarjun Kharge or Siddaramaiah as chief minister, Kumaraswamy’s brother H D Revanna and Congress leaders expressed hope of saving the coalition. 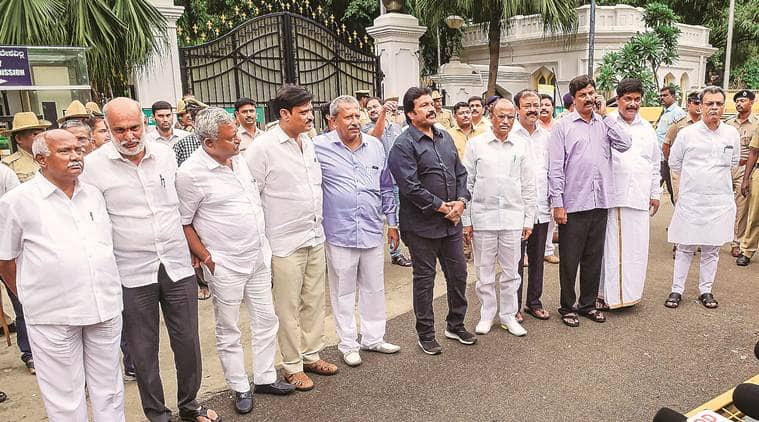 Congress and JD(S) MLAs who submitted their resignation, outside Raj Bhavan in Bengaluru on Saturday. PTI

“We are hopeful of resolving the situation, just wait and watch after the CM returns,’’ state Congress working president Eshwar Khandre said after meetings of Congress leaders with central observer K C Venugopal.

“Only 5-6 of the 13 rebel MLAs are keen to defect to the BJP. The others have other demands and are not keen to give up their seats if their demands can be met. The problem is that all the different interest groups have united now,” JD(S) sources said.

Congress leader in the Assembly Siddaramaiah, meanwhile, called for a meeting of the state legislature party Tuesday. A session of the Assembly is scheduled to begin on July 12, when the BJP is likely to seek a floor test.

In Delhi, the BJP leadership maintained that the party, which is the single-largest in the 224-member Assembly with 105 MLAs, is not responsible for the crisis. “It’s the Congress leaders’ foolishness that they blame the BJP for the current crisis. Ramalinga Reddy, one of the MLAs who resigned, is a senior party leader and a former Home Minister. Even Ramesh Jarkiholi is a multi-term legislator. If they have resigned from the party, it cannot be because of the BJP,” Muralidhar Rao said.

“It’s the failure of the Congress leadership, its move to go for an opportunistic alliance, and the internal crisis that have led to this situation,” he said.

According to the senior BJP leader, the current government “is going to fall, for sure”. “But we don’t want to rush to take other steps,” Rao said.

According to BJP leaders, the party has several options. “The atmosphere is conducive for the BJP. As senior leaders are out against the Congress, which is already in an existential crisis, no one can blame the BJP for the current crisis. The party can either form an alternative government or go for elections. An election this time will be advantageous to the BJP,” said a party leader from Karnataka.