If the resignations are accepted, the 13-month-old Congress-JD(S) government in Karnataka will lose the majority, paving the way for the BJP to stake claim to form the next government.

As the Karnataka government teetered on the brink, Chief Minister H D Kumaraswamy announced on Friday that he would seek a trust vote. He sought time from Assembly Speaker K R Ramesh Kumar who in turn said a slot would be allotted whenever the CM opted for it. Former Karnataka CM and Congress leader Siddaramaiah said the Congress-JD(S) coalition is confident of retaining the numbers in the Assembly and that is why they are moving the vote of confidence motion. However, he said he “did not want to disclose” how (Cong-JDS) will win the vote of confidence in the Karnataka legislative assembly.

Meanwhile, the Supreme Court while hearing the bunch of pleas moved by rebel MLAs directed the Speaker to not decide on the resignation or disqualification of legislators till July 16. The apex court will now hear the matter on Tuesday. The political turmoil in the southern state persists even as the 10-day-long Karnataka Monsoon session began with CM HD Kumaraswamy moving a confidence motion.

Eight of the 11 rebel MLAs, who met the Speaker at Vidhan Soudha in Bengaluru Thursday on the Supreme Court’s direction, have submitted fresh resignation letters. If the resignations are accepted, the 13-month-old Congress-JD(S) government in Karnataka will lose the majority, paving the way for the BJP to stake claim to form the next government.

As the political crisis deepens in Karnataka follow us as we track all developments. Follow Karnataka Crisis LIVE UPDATES Here

Resort politics returned to Karnataka as the three key players — ruling Congress and JDS and opposition BJP  herded their MLAs in luxury stays to keep their flock intact amid the continuing tension triggered by the legislators' resignation saga.
The JDS has chosen the serene surroundings of Nandi Hill on the city outskirts while its partner Congress opted for a star hotel here, sources in the parties said. The MLAs of the BJP are staying in the cozy comforts of a resort near Yelahanka here and an ultra luxury hotel. (PTI)

Congress moves its MLAs to Taj Yeshwantpur in Bengaluru

Congress moves its MLAs to Taj Yeshwantpur in Bengaluru.

#Karnataka: Congress moves its MLAs to Taj Yeshwantpur in Bengaluru.

Karnataka Assembly Speaker K R Ramesh Kumar Friday told the Supreme Court the allegation by 10 rebel MLAs of the Congress-JD(S) coalition that he had made himself "scarce" and was unavailable on the day of their resignation is "fallacious".
In an affidavit, he said that none of these MLAs submitted the resignation in person or by hand to him. "It is therefore patently false to suggest that the speaker had made himself scarce or was unavailable".
The MLAs moved the apex court alleging that the speaker was not accepting their resignations. Their counsel had told the top court on Thursday that on July 6, when some of the MLAs went to submit their resignations, the speaker left his office through the back door. (PTI)

One of the concerns that Congress leaders have as the Karnataka legislative assembly enters a phase of uncertainty on account of the resignation of 16 MLAs from the ruling Congress-JDS coalition is that the Speaker of the state assembly K R Ramesh Kumar will show no favouritism despite being a Congress leader for many years. Read more...

Lone BSP MLA N Mahesh in the Karnataka Assembly chose not to speak to the media.

Lone BSP MLA N Mahesh comes out from Vidhana Soudha after Day-One of the Monsoon session in Karnataka legislative assembly. He chose not to speak to the media on the #KarnatakaPoliticalCrisis ⁦@IndianExpress⁩ pic.twitter.com/2o2X5Aex7D

Karnataka Urban Development Minister UT Khader said seeking of trust vote is the way to solve the confusion that has arisen between the people of the state and the government. "It is the moral responsibility (of any chief minister) and ethics of politics, and that is why a chief minister is looked up to as a role model," he said. "If we get the majority, we will continue, otherwise no." When asked about when the trust vote will be moved, he said only Speaker will decide that.

"Whenever such confusion arises between the people of the state and the government, it is the moral responsibility (of any chief minister), ethics of politics," said Karnataka minister UT Khader while speaking on chief minister's decision of seeking trust vote. pic.twitter.com/F0kyXtT8bR

BJP uses money to bring down state governments, saw that in Northeast as well: Rahul Gandhi

Congress leader Rahul Gandhi Friday said BJP uses money to bring down state governments.  "They have been doing that. We saw that in the Northeast as well," he added.

Rahul Gandhi on political developments in Karnataka: BJP uses money to bring down state Govts, they have been doing that. We saw that in the North east as well. pic.twitter.com/gqEav98XeU

JD(S) legislators have left for a resort on the outskirts of Bengaluru after the first day of monsoon session in Vidhana Soudha. They were ferried in a bus different from the one in which they came to the legislative assembly this morning.

Moving vote of confidence motion because we are confident: Siddaramaiah

We are confident that we get the approval of the house for our (vote of confidence) motion, CLP leader @siddaramaiah says. However, he said he "did not want to disclose" how (Cong-JDS) will win the vote of confidence in the Karnataka legislative assembly. @IndianExpress pic.twitter.com/zqawLDrts5

Karnataka Congress MLA Tanveer Sait says Congress-JD(S) coalition has the numbers to retain the government in Karnataka. According to him, the coordination between the two parties is now even better than before.

Karnataka Congress MLA Tanveer Sait says Congress-JD(S) coalition has the numbers to retain the government in Karnataka. According to him, the coordination between the two parties is now even better than before.https://t.co/H4JeiwkYw6 pic.twitter.com/ry4eAGzfpf 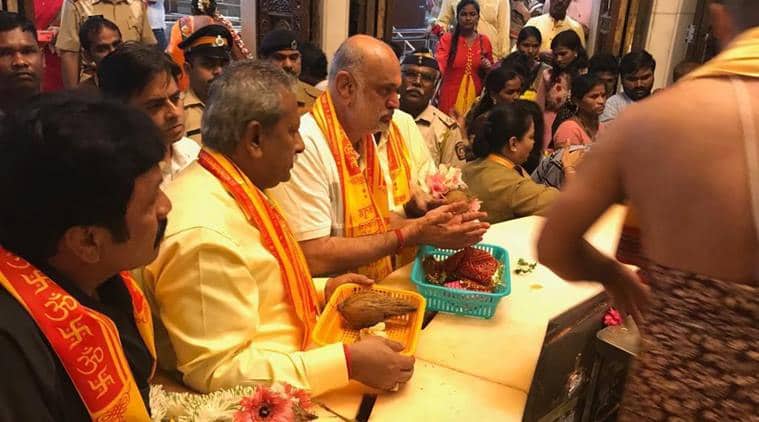 Slot will be alloted for moving trust motion whenever CM opts for it: Karnataka Speaker

In the wake of H D Kumaraswamy deciding to seek a trust vote, Assembly Speaker K R Ramesh Kumar Friday said a slot would be allotted whenever the Karnataka Chief Minister opted for it.
"The chief minister has spoken his mind that he would not cling to power amid the confusion. He said he will seek the trust of the House," the Speaker told reporters here.
"Whenever he tells me that he wants to move the trust motion, the very next day I will put it in the business of the day," he added. (PTI)

Have to wait and see if their (MLAs') mind changes: Anitha Kumaraswamy

JD(S) MLA and Chief Minister HD Kumaraswamy's wife Anitha Kumaraswamy said the speaker is yet to accept the resignations. "We’ll have to wait and see if their mind changes. Still hopeful," Anitha said.

Congress to move its MLAs to Clarks Exotica Convention Resorts in Bengaluru after Assembly session.

#Karnataka: Congress to move its MLAs to Clarks Exotica Convention Resorts in Bengaluru, after the Assembly proceedings today. pic.twitter.com/7EJOtwWLyi

Kumaraswamy made the plea seeking the trust vote in the Assembly

Karnataka Chief Minister H D Kumaraswamy Friday said he would seek a trust vote and asked Speaker K R Ramesh Kumar to fix the time for it. The embattled JD(S) leader also said he was ready for everything and that he was not here to cling to power. Kumaraswamy made the plea seeking the trust vote in the Assembly, which met here amid a flurry of political developments that have pushed his already wobbly government on the brink of collapse.

Karnataka CM H D Kumaraswamy on Friday sought time from the Speaker of the state assembly to seek a vote of confidence in his government Kumaraswamy made the request in the course of condolence messages at the opening of the state assembly session. The numbers of the coalition will fall to 101 in the event of acceptance of the resignations of 16 MLAs by the Speaker. The BJP has 105 MLAs and the support of two Independents at present.

The rebel MLAs had moved the Supreme Court claiming that the Speaker was deliberately withholding their resignations  On the apex court orders thereafter, they flew back to Bengaluru on a chartered flight from Mumbai where they were holed up since July 6 to meet the Speaker. While the resignations of two of the 10 MLAs had been declared to be in the proper format on July 9, the Speaker Thursday perused the fresh resignations of eight others and found them in order.

“I am looking into their resignations. They will continue to be legislators of their party. The issue of whip is left to the party. All as per our records, whoever belongs to a particular political party and if that party chooses to serve a whip on its members it is binding on them,’’ the Speaker said on the 16 MLAs who have resigned.

“They have all given their resignations in the proper format now and I have received them. They asked me to accept them immediately but I said it cannot be done that way. As per Kaul and Shakdher, and as per article 190 of the Constitution, I must be convinced that the resignations are genuine,” he said.

“You come here and tell me to accept your resignation but I have to consider through the night whether they are genuine and voluntary. I have to look at the definitions of those words. I cannot stray away from what the rules state even if it benefits some but not others.”