Karnataka Assembly and Lok Sabha Bypoll Election 2018 HIGHLIGHTS: BJP which has been questioning the longevity of the coalition government in Karnataka has predicted its fall once the bypoll results are out.

Voting for the bypolls to the three Lok Sabha and two assembly constituencies in Karnataka began on Saturday. The bypolls are a crucial test for the ruling Congress-JD(S) combine as they face their first major political test since forging an alliance five months ago. The polls are significant as the coalition partners have termed it as a “prelude” to the 2019 General Elections and called for a similar “grand secular alliance” against the BJP at the national level. BJP which has been questioning the longevity of the coalition government in Karnataka has predicted its fall once the bypoll results are out.

Polling for the three Lok Sabha seats — Ballari, Shivamogga and Mandya — and two Assembly segments — Ramanagara and Jamkhandi — will conclude 6 pm Saturday, with a total of 54,54,275 voters eligible to cast their franchise in about 6,450 polling stations. There are 31 candidates in the fray in all the five constituencies, though the contest is mainly between the Congress-JDS combine and the BJP.

Karnataka Bye-Elections 2018 LIVE Updates: BJP has predicted fall of Congress-JDS alliance once the results for the Ballari, Shivamogga, Mandya, Ramanagara and Jamkhandi bypoll are out.

BJP MLA B Sriramulu cast his vote at polling station

About 35 per cent polling reported till 1 pm

About 35 per cent voting was recorded Saturday during the first half of polling for the by-polls to three Lok Sabha and two assembly constituencies in Karnataka.

While the Lok Sabha constituencies of Shivamogga, Ballari and Mandya have recorded 30.20, 35.72, 26.80 per cent voting, respectively, till 1 pm, the assembly segments of Ramanagara and Jamkhandi reported 39.81 and 43.50 per cent respectively.  (PTI)

Shimoga constituency: Sons of three former chief ministers contest against each other

Among the most closely-watched constituencies in the bypolls is Shimoga, where sons of three former chief ministers of Karnataka are pitted against each other.

The three sons have been politically active for a while and have been elected to public offices in elections, but are still dependent on the political legacy of their fathers to win elections.

#KarnatakaByElection2018: Madhu Bangarappa, JDS candidate from the parliamentary constituency of Shimoga cast his vote at a polling booth in Kubtur, today. pic.twitter.com/IujMdbQrNA

To facilitate voting exercise to differently-abled voters in Karnataka, the government, for the first time initiated a pick-up and drop facility for them.

In battle for Ballari, tussle between two Congress ministers resurfaces

Bellari constituency, reserved for Scheduled Tribes saw a power struggle between two powerful leaders in the Congress in Karnataka. Ministers D K Shivakumar and Ramesh Jharkiholi crossed swords over the Ballari campaign. The Congress has fielded former MLC V S Ugrappa as its candidate in Ballari constituency, reserved for Scheduled Tribes, and Shivakumar is heading the campaign. The leadership had initially drafted Jharkiholi — an ST leader — for campaigning, but has now asked him to stay away over fears that his rivalry with Shivakumar could hurt the party. Jharkiholi had been assigned the task of campaigning in Kudligi region of Ballari, but was soon asked to withdraw from the campaign.

Ugrappa, the Congress candidate, is not a Ballari local and has been fielded on account of his presence as a prominent campaigner against the illegal mining mafia a few years ago and his proximity to former chief minister Siddaramaiah. “Ugrappa has emerged as an able leader. He is popular as a leader of the Nayak community. The people of Ballari will support him,’’ Municipal Administration Minister Jarkiholi had said after he was drafted to campaign for Ugrappa.

Watch: Voting delayed in one of the booths of Ramanagaram

#WATCH: A snake being removed from polling booth 179 in Mottedoddi of Ramanagaram. The voting was delayed after it was spotted and resumed soon after it was removed. #KarnatakaByElection2018 pic.twitter.com/W1XrDeIP3z

In Jamkhandi, Congress candidate Anand Nyamagowda, son of former MLA Siddu Nyamagouda, is pitted against Srikant Kulkarni of the BJP.

Voting turn out till 9 am close to 6 per cent

Karnataka: People queue up outside booth no. 50 in Hirepadasalgi village of Jamkhandi to cast their votes for #KarnatakaByElection2018. pic.twitter.com/sWM7AqQjXO Among the most closely-watched constituencies in the bypolls is Shimoga, where Yeddyurappa is fielding his son B Y Raghavendra against Congress-JDS candidate Madhur Bangarappa, who is the son of former Congress CM S Bangarappa. While Yeddyurappa has dominated the constituency for nearly two decades, the Congress-JDS combine has joined forces and recalled the legacy of Bangarappa in an attempt to break the BJP chief’s grip over the constituency. Read more here

Former Karnataka CM Siddaramaiah had earlier warned BJP against indulging in ‘Operation Lotus’ again, saying the saffron party was already in a state of “coma” due to its past deeds.

Asserting that the BJP would remain in opposition in Karnataka, Siddaramaiah said, “Yeddyurappa (now state BJP chief) has once again made a statement that the government would fall. Already due to several rounds of operations, the lotus (BJP symbol) in Karnataka is in coma. Now once again don’t try your hands into the wrong adventure of Operation Lotus.”

In Jamkhandi, Congress candidate Anand Nyamagowda, son of former MLA Siddu Nyamagouda, is pitted against Srikant Kulkarni of the BJP.

Former Karnataka CM BS Yeddyurappa cast his vote at a polling booth in ward no 132 at Shikaripura in Shimoga.  In the BJP, Yeddyurappa is likely to face resistance over his efforts to field his son from Shimoga against a joint candidate of the Congress and JDS. The Congress has chosen senior minister D K Shivakumar — who has been sulking after being forced to back down in a power battle within the Congress party — to handle the elections to the Ballari seat where the BJP is likely to field a candidate of former MP B Sriramulu. 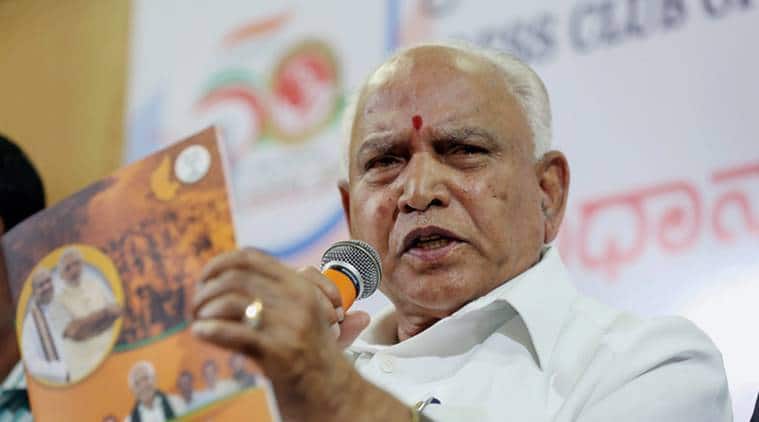 If Congress-JDS alliance wins all five seats, it will send an indication to the whole country: JDS chief H D Deve Gowda

Initially unenthused by the prospects of the bypolls, the Congress, JDS and BJP have taken the byelections seriously in the past couple of weeks with the JDS in particular going the extra mile to win them and preserve the coalition government. Chief Minister H D Kumaraswamy has also called the bypolls a semi-final for the coalition before the final parliamentary polls next year.“If the Congress-JDS alliance wins all five seats, it will send an indication to the whole country. It will be a message to all the states going to the polls in the next few months,” former prime minister and JDS president H D Deve Gowda said.

In Assembly constituency of Ramanagaram, JD(S) Chief Minister H D Kumaraswamy’s wife, Anitha Kumaraswamy is set to win with virtually no opposition as her closest rival from the opposition BJP has decided to join the Congress. On Friday, the BJP petitioned the Election Commission to countermand the bye-election in Ramanagara constituency days after its candidate dropped out of the contest and rejoined the Congress. L Chandrashekhar, who was set to go up against Karnataka Chief Minister HD Kumaraswamy’s wife Anita Kumaraswamy, claimed to have withdrawn from the election as he was worried about his future in the BJP and accused the party of abandoning him after giving him the ticket.

Early visuals from a polling station in Bellary Karnataka Bye-Elections 2018 LIVE: Polling in the by-polls to three Lok Sabha seats will be held between 7 am to 6 pm Saturday.

The announcement of the bypolls for the Lok Sabha seats came as a surprise to all three major political parties in the state — Congress, BJP and JD(S) — who questioned the need for the exercise when the General Elections are due next year.

In Jamkhandi, Congress candidate Anand Nyamagowda, son of former MLA Siddu Nyamagouda, is pitted against Srikant Kulkarni of the BJP. In Shivamogga, state BJP chief B S Yeddyurappa's son B Y Raghavendra is testing his fortunes against another former chief minister S Bangarappa's son Madhu Bangarappa of the JD(S). In Ballari, senior BJP leader Sriramulu's sister J Shantha is fighting against V S Ugrappa of the Congress, considered an outsider. In the Vokkaliga bastion of Mandya, JD(S)'s Shivarame Gowda, is pitted against a fresh face in Dr Siddaramaiah, a retired Commercial Tax officer from the BJP.

The bypolls have been necessitated after Yeddyurappa (Shivamogga) and Sriramalu (Ballari), and C S Puttaraju of JD(S) (Mandya) resigned as MPs to contest the Karnataka Assembly elections in May this year. Bypolls to Jamkhandi assembly seat was caused by the death of Congress MLA Siddu Nyamagouda, while Ramanagara fell vacant after Kumaraswamy gave up the seat preferring Chennapatna, the other constituency from where he had won.