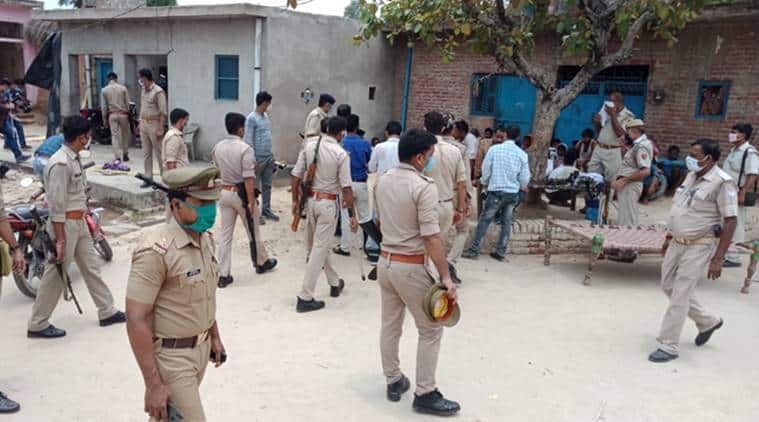 Eight UP cops were killed in the Kanpur encounter. (Express photo/Vishal Srivastava)

History-sheeter Vikas Dubey, who was the target of a raid that led to the death of eight police personnel in Kanpur early Friday, has around 60 criminal cases against him and carries a reward of Rs 50,000 on his head.

Dubey (53), who hails from Bikaru village in Kanpur, was earlier accused in the murders of BJP leader Santosh Shukla (54) and retired school principal Siddheshwar Pandey (65) at Shivli police station area of Kanpur Dehat. While he was acquitted in the Shukla murder case, he was awarded life imprisonment in the Pandey murder case and is now out on bail.

Shukla was murdered inside Shivli police station campus in October 2001. He was then chairman of Contract Labour Board and held the rank of minister of state. After Shukla’s death, Dubey joined politics and won the election for Zila Panchayat member.

“After investigation, chargesheet was filed in 2002 against eight persons including Dubey and three policemen. In 2003, all accused were acquitted by a local court for want of evidence,” said Shivli police station SHO Veer Pal Singh.

Shukla’s brother Manoj said, “My brother was killed over political rivalry.” He added that no appeal was filed in the High Court because of Dubey’s political connections. “Dubey was associated with leaders of various political parties and helped them during elections. He had a following of loyal youths,” Manoj said.

The Pandey murder took place near Shivli bus stand on November 14, 2000, allegedly over a land dispute. Dubey was accused of conspiring for the murder while in jail. The police filed chargesheet against four persons including Dubey.

“A local court in 2004 awarded life imprisonment to all accused. One of them died while three others are out on bail,” said an officer of Shivli police station.

When contacted, Additional Director General, Law and Order, Prashant Kumar said, “A reward of Rs 50,000 has been declared on the head of Vikas Dubey, who has around 60 cases against him.”