Two children, identified as Gulnaz Begum, 15, of Islamabad and Yasir Arif, 6, of Shahpur, sustained splinter injuries in the Pakistani firing. An Army jawan too was injured in shelling at Shahpur 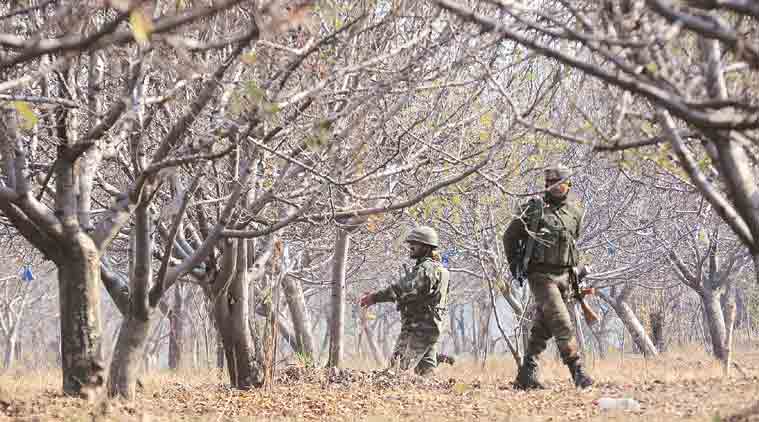 Earlier in the day, a 15-year-old girl was injured after Pakistani troops resorted to unprovoked mortar shelling, (File Photo)

An Army Captain and three jawans were killed in a ceasefire violation by Pakistani troops along the Line of Control (LoC) in Bhimber Gali sector of Rajouri district on Sunday afternoon.

Army sources said the Pakistani troops used indirect firing weapons of higher calibre, which means either anti-tank missiles or artillery guns. The use of small arms, sources said, would not lead to such high casualties.

The dead officer and jawans of 15 JAKLI Battalion of 25 Infantry Division have been identified as Captain Kapil Kundu, 23, of Ransika village in Pataudi tehsil of Haryana, Havildar Roshan Lal, 43, of Samba district in J&K, Rifleman Ram Avtar, 28, of Baraka village in Gwalior, and Rifleman Shubam Singh, 23, of Kathua
district in J&K.

According to Army sources, the incident occurred at around 3.30 pm. A jawan, Lance Naik Iqbal Ahmed, and a BSF Sub-Inspector were also injured in the heavy mortar shelling from across the border.

Sources said another soldier was injured along the LoC in Shahpur area of Poonch district. Two children, Gulnaz Begum, 15, and Yasir Arif, 6, were also injured in Poonch district.

According to sources, the shelling on Sunday started in Shahpur area of Poonch district around 11.15 am, spreading to Balakote sector in Mendhar and Manjakote in Rajouri district by 3.30 pm.

“The martyrdom of Indian Army soldiers will not go in vain, and the Pakistani Army will be given a befitting response,” the spokesperson said.

The shelling on Sunday came days after BSF personnel foiled an infiltration bid in Samba district on Thursday night.

Meanwhile, all the 84 schools in the border areas, from Subderbani to Manjakote in Rajouri district, have been closed for the next three days. Expressing grief over the death of soldiers, Chief Minister Mehbooba Mufti conveyed her condolences to their families.

In the past, infiltration during the snow-bound winter months has remained low. Consequently, there are fewer ceasefire violations, which are used by the Pakistani Army to provide covering fire to infiltrating groups of militants.

But this year, the snowfall has been among the lowest ever. The Indian Army has also been proactive in targeting Pakistani Army posts which act as launching pads for militants. This has led to a sharp increase in the number of ceasefire violations and in the calibre of weapons used by both sides.