About PDP and NC leaders' charge that Governor House did not receive Mehbooba Mufti's fax on Wednesday staking claim for government formation, he said that his office was closed on account of Eid. 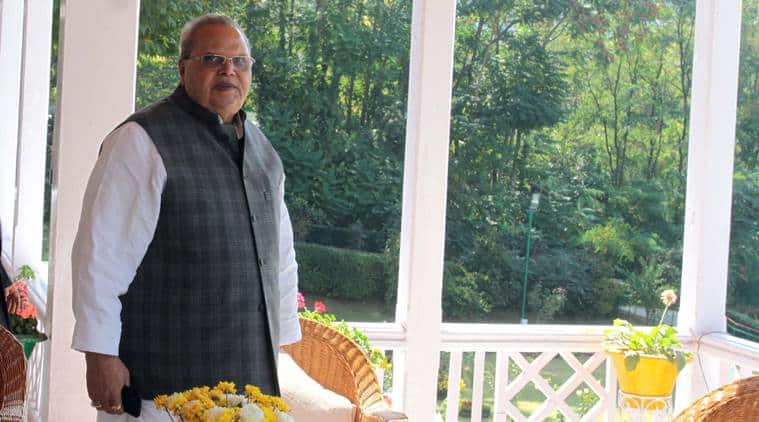 A day after dissolving the J&K Legislative Assembly, Governor Satya Pal Malik Thursday justified his decision by claiming that MLAs were receiving “terrorist threats” and that money was being “offered on a large scale” in efforts to form a government.

Describing the PDP-National Conference (NC) efforts to stitch an alliance for government formation as “unholy”, Malik said “this was a power hungry alliance for self-preservation to avoid a split in their respective parties”. “There has been a lot of dissatisfaction among both the parties,” he said.

“I had been receiving reports from various quarters, including intelligence agencies, for the last one week or ten days that in efforts to form a government, the atmosphere has been made vicious. Money was being offered on a large scale. People are being threatened, some have received terrorist threats… How could I have allowed this?” he asked. Malik was responding to allegations raised by PDP and NC that his decision Wednesday to dissolve the Legislative Assembly was a “murder of democracy”.

Malik’s decision came shortly after PDP leader Mehbooba Mufti staked claim to form a government with the support of the NC and Congress, citing a collective strength of 56 MLAs in the 87-member House. A separate claim to form a government was made by Sajad Gani Lone of the two-member People’s Conference who claimed support of the BJP and 18 MLAs from other parties. The Assembly was kept in suspended animation since June when Governor’s Rule was imposed after the BJP ended its alliance with the PDP to bring down the ruling coalition.

On Thursday, Malik pointed out that he had made clear after taking charge in August that he would not allow any party to form the government through underhand means, defections or threats. Asked whether fresh elections would be held along with Lok Sabha polls, he said that a decision will be taken by the Election Commission. For the last couple of days, he said, reports of horse-trading were pouring in. “Even Mehbooba Mufti herself rang me up a week ago, complaining that her MLAs were being coerced under the threat of NIA (National Investigation Agency),’’ he said. “Under the given situation, had I given a chance to any side, there would have been horse-trading on a large scale during the period given to prove a majority. This would have destroyed the political value system, which I could not have afforded,’’ he said.

Explained: Making of an unlikely alliance

Referring to the peaceful conduct of the urban local body polls recently and the ongoing panchayat elections, Malik said his administration was carrying democracy to the grassroot level, with people participating in large numbers. “At this juncture, this attempt at government formation was made by those who did not want elections and who had been boycotting the electoral process. It was possible that they may have cancelled these elections, or not allowed them,” he said.

Referring to the coordination between police and security forces, the Governor said they have created a situation in which “hardly one or two new persons” had joined the militancy during the last 50 days in the Valley. “Stone pelting has almost come to an end and nearly 60 terrorists have been gunned down during the period,” he said. “This situation would have altered in the event of formation of an unstable government. What would have come out of it would have been an opportunist government. There would have been differences between them… spoiling many things. Whatsoever I did, I acted in the interest of the state and not mine,” Malik said.

About the charge levelled by PDP and NC that the Governor House did not receive Mehbooba Mufti’s fax on Wednesday staking claim for government formation, he said his office was closed on Eid. “There was no one in my office even to serve me food,” he said, adding that they could have sent it to him a day earlier.

“However, even if they had delivered it, it would have made no material impact in view of the reports received by me during the past ten days… Those crying foul have themselves been asking me for the last five months to dissolve the Assembly. However, I had been keeping it alive as MLAs had funds, and public work was going on. The political process was halfway through, but it was on,” Malik said.

BJP MP’s notice for question of privilege against Moily