Kashmir Pulwama Terror Attack highlights: The encounter comes less than a week after at least 40 CRPF personnel were killed and several others were injured in the deadliest terror attack in the Valley. 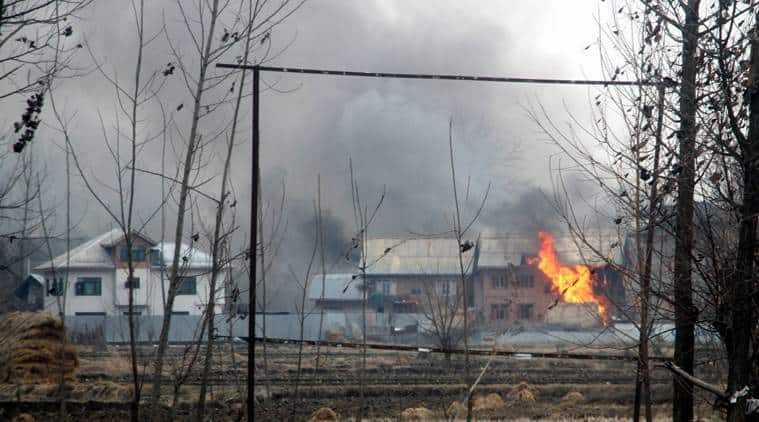 A cordon and search operation was launched jointly by J&K Police and security forces after receiving credible inputs about the presence of militants. (Shuaib Masoodi)

Kashmir Pulwama Terror Attack: Four soldiers, including a Major, and two militants were killed after an encounter broke out in Pinglena area of South Kashmir’s Pulwama district on the intervening night of Sunday and Monday. The encounter is underway.

In the initial exchange of fire, four Army soldiers and one civilian sustained critical gunshot injuries who were later rushed to the Army’s 92 Base Hospital in Srinagar. Four of the soldiers and the civilian, however, succumbed to injuries. The four Army men have been identified as Major Vibhuti Shankar Dhoundiyal, Hawaldar Sheo Ram, Sepoy Hari Singh and Sepoy Ajay Kumar.

The attack from the militants was retaliated by the security forces leading to an encounter in which two militants were killed and their bodies have been retrieved from the encounter site. According to the police, the identity of the slain militants is being ascertained.

The encounter comes just days after a suicide bomber rammed an SUV laden with explosives into a bus, killing 40 CRPF jawans and injuring several others.

Four soldiers and a civilian were killed in an encounter in Pulwama district. Here are the highlights

Need to stop obsession with Pak, set our own house in order: Mehbooba

Former J&K Chief Minister and PDP president Mehbooba Mufti Monday expressed condolences to the families of soldiers killed in the Pulwama encounter, saying the bloodshed will only stop when the Centre overhauls its approach to Jammu and Kashmir. "Deepest condolences to the families. This bloodshed will only stop when GoI (Government of India) overhauls its approach (rather lack of it) towards J&K," the former Jammu and Kashmir chief minister said in a tweet. She expressed the need to "stop the obsession with Pakistan" and "set our own house in order".

Deepest condolences to the families. This bloodshed will only stop when GoI overhauls its approach(rather lack of it) towards J&K. Lets drop the obsession with Pakistan and get our own house in order. The current attitude will only worsen the situation & polarise the nation. https://t.co/CC5wRh5boj

A Brigadier is the latest to be injured in the encounter that is presently going on in the Pinglena area of South Kashmir’s Pulwama district. DIG South Kashmir Amit Kumar has also been injured in the gunfight after being hit by a bullet in the leg. In the initial exchange of fire, four Army soldiers and one civilian sustained critical gunshot injuries who were later rushed to the Army’s 92 Base Hospital in Srinagar. They later succumbed to the injuries. 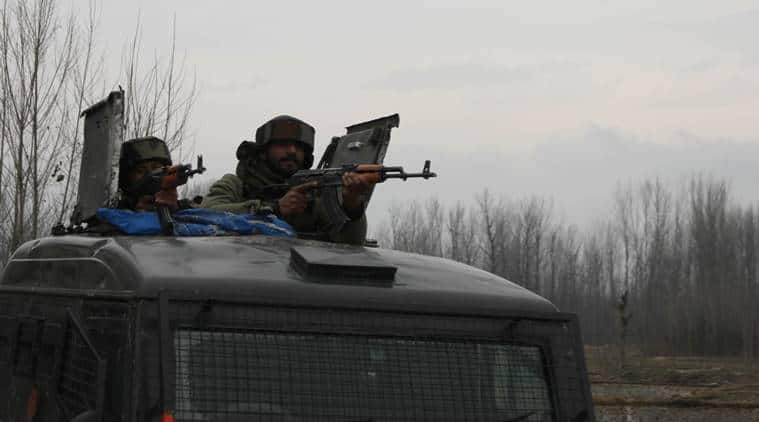 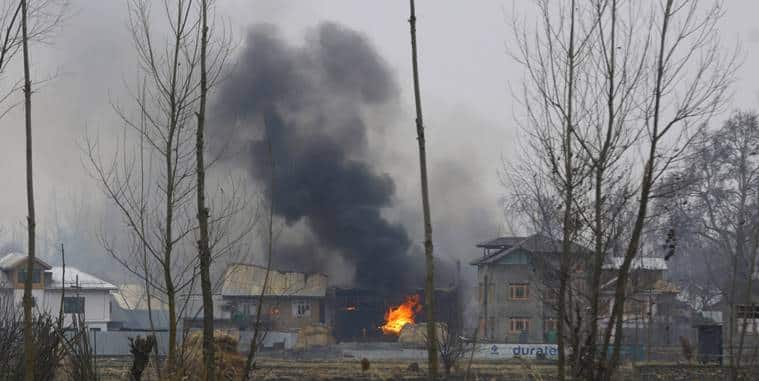 The Pulwama encounter is still going on. DIG South Kashmir Amit Kumar has been injured in the gunfight after being hit by a bullet in the leg. In the morning, four soldiers, including a Major, and two militants were killed during the encounter in Pinglena area. Police sources say two more terrorists are holed up.

After talks with Argentine President Mauricio Macri, Prime Minister Narendra Modi on Monday said the Pulwama attack has shown the time to talk about tackling terror is over and the world is now required to unitedly take concrete action against terrorism and those behind its spread. He further said that dithering to take action against terrorists and their supporters was akin to encouraging terrorism.

The district administration on Monday announced a three-hour curfew relaxation from 2 pm to 5 pm in south Jammu city. "Except for one or two places, curfew will be relaxed in all areas of South Jammu for three hours on Monday," said Jammu Deputy Commissioner Ramesh Kumar. In other areas, a decision to relax curfew will be taken after reviewing the situation, he added. Curfew was imposed in Jammu city and its outskirts on Friday following violence and arson during a bandh called in protest against the killing of 40 CRPF personnel in a militant attack in Kashmir.

Army Sources: Army is constantly briefing Defence Minister & other senior govt functionaries on the developments in Kashmir. Jaish-e-Mohammed terrorists have moved from their hideouts to locations near populated areas fearing retaliation from security forces.

Union Home Minister Rajnath Singh on the ongoing encounter in #Pulwama, J&K: The morale of the security forces is high. They are being successful in neutralising the terrorists. pic.twitter.com/21DHSFB7CS

US FDA says India-made eye drop linked to some infections, blindness and ...
Rahul Gandhi writes to PM over ‘plight’ of Kashmiri Pandits, ...
Parliament is the North Star of democracy: Dhankhar
Chennai pharma recalls eye drop after infections in US, unit’s inspection on
Bhupesh Baghel criticises Union Budget, says investment by government in ...
More from India >>
Pulwama encounter: Army Major among 4 soldiers killed has been identified as VS Dondhial
Curfew continues for fourth day in Jammu

#WATCH Police in #Pulwama appeals to locals to leave the site of Pulwama encounter. Four 55 Rashtriya Rifles personnel have lost their lives & one injured and two terrorists neutralised in the ongoing operation. (Visuals deferred by unspecified time) #JammuAndKashmir pic.twitter.com/q2X13OitXX

Jammu & Kashmir: A cordon and search operation by the security forces have started in village Krawora in Shopian

#JammuAndKashmir : Two terrorists have been killed during encounter between terrorists and security forces, in Pinglan area of Pulwama district. Operation still in progress.

Congratulations to Security forces for neutralising mastermind of Pulwama attack by tracking them down. Well done boys . Heartfelt condolences to families of 4 Army martyrs.@Pulwama attack.

Visuals: The 4 Army personnel including a Major, who were killed in action during encounter between terrorists and security forces, in Pinglan area of Pulwama district, belonged to 55 Rashtriya Rifles. #JammuAndKashmir (Visuals deferred by unspecified time) pic.twitter.com/Wa2sxz3bzT

The cross-LoC bus service from Poonch in Jammu & Kashmir to Rawalakot (Pakistan-occupied Kashmir) has been suspended for today. (file pic) pic.twitter.com/PLmMvpm7sl

4 Indian Army personnel of 55 Rashtriya Rifles, who lost their lives in encounter with terrorists in Pulwama district, J&K today, have been identified as Major VS Dhoundiyal, Havaldar Sheo Ram, Sepoy Ajay Kumar and Sepoy Hari Singh; Deferred visual from the encounter site pic.twitter.com/3ngvCmG7LR 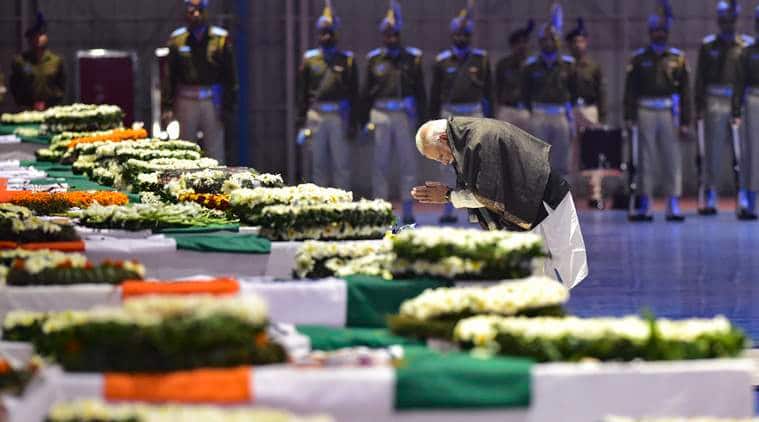 The Jaish-e-Mohammed had claimed responsibility for the Pulwama terror attack and revealed the identity of the suicide bomber, Adil Ahmad Dar, a 20-year-old Kashmiri youth from Pulwama.

The attack triggered an immediate response from the Centre which revoked the Most Favoured Nation Status accorded to Pakistan and hiked customs duty on imports from the country by 200 per cent.