In the first incident of violence during the ongoing polls, a Jammu and Kashmir Apni Party (JKAP) candidate was injured when militants shot at him while he was canvassing in Sagam constituency in south Kashmir’s Anantnag district. 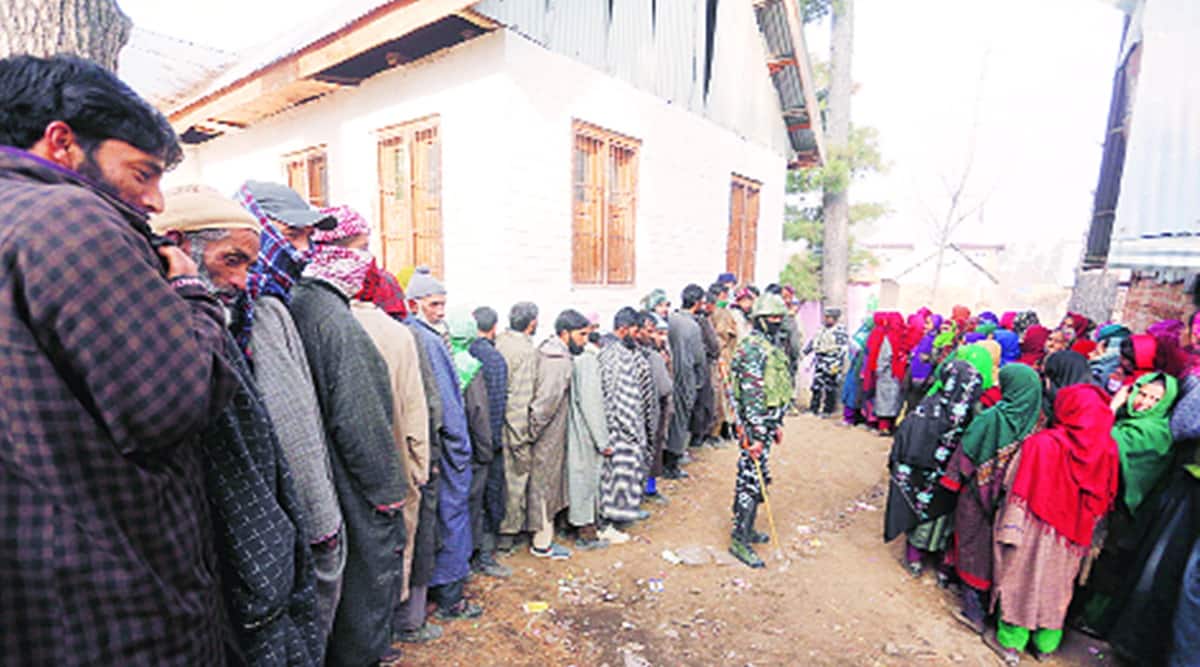 Security personnel keep vigil as voters queue up at a polling station in Shopian district on Friday. (Photo by Shuaib Masoodi)

A turnout of 50.53 per cent was recorded in the third phase of the District Development Council (DDC) polls in Jammu and Kashmir as the Jammu division and south Kashmir districts recorded higher turnouts than the second phase on Friday.

In the first incident of violence during the ongoing polls, a Jammu and Kashmir Apni Party (JKAP) candidate was injured when militants shot at him while he was canvassing in Sagam constituency in south Kashmir’s Anantnag district.

J&K’s Election Commissioner K K Sharma told the media that 31.61 per cent of voters exercised their right in Kashmir and the figure stood at 68.88 in the Jammu region.

At Devpora, on the fringes of Shopian district, Mohammad Sharief, 40, voted for the first time. “The biggest problem here is connectivity. The nearest hospital is about 10 km away and we have to carry elders or the women on our shoulders when they are unwell,” said Sharief.

At Zawoora, in the Shopian I constituency, a single-storey school houses two polling booths. Turnout picked up as the day progressed.

Outside the school, Nissar Ahmad (38), after casting his vote, spoke to some middle-aged men about the possible outcome of the polls. He speaks of “administrative apathy” and the issue of travelling to Srinagar to meet the Lieutenant Governor’s advisers. Pointing to his house, not far from the polling station, he says, “This is the shortest distance I can travel to bring a change.”

The turnout was relatively lower in north Kashmir.

“I was in a dilemma whether I should vote or not. But finally I voted, for the first time,” said Mushtaq Ahmad, a resident of Seer Jagir village in Sangrama constituency of Baramulla. “It is like walking on the sword’s edge, if we vote, we are going against what we stood for all these years. If we don’t, we would be facilitating illiterates and ruffians coming to power.”

Nearby stand a group of youngsters. “It doesn’t make any sense. Whether BJP comes to power or any other party, it would make no difference to us,” said one of them.

At Anantnag, militants shot at and injured Apni Party candidate Anees-ul-Islam Ganaie while he was campaigning.

Police said he has been hospitalised with injuries in his left hand and thigh and his condition is stable. Police claimed Islam went for canvassing without informing them.

Apni Party president Mohammad Altaf Bukhari condemned the attack. “This dastardly attack on our contesting candidate is a manifestation of frustration among forces inimical to peace and rising popularity of the Apni Party among the people,” he said.

Condemning the attack, NC vice-president and former CM Omar Abdullah said, “Disturbing reports coming in from Kokernag in South Kashmir of an attack on a DDC election candidate. I hope & pray that he survives the attack. Elections have always brought out the worst in those forces, who have remained inimical to peace in Kashmir.”

The People’s Conference president and spokesperson of Gupkar Alliance Sajad Lone said: “The attack on a contesting DDC candidate is detestable to say the least. Violence has been the biggest facilitator in our disempowerment.”