Jind bypoll HIGHLIGHTS: Polling ends, turnout at over 70 per cent

A 110-year-old voter at a polling booth in Jind. (Express photo)

Voting in the bye-elections to the Jind Assembly constituency in Haryana took place today with 70 per cent of the people exercising their franchise. The bypoll, which comes months ahead of the Lok Sabha and Assembly elections, is witnessing a multi-cornered contest among the ruling BJP, opposition INLD, Congress and Jannayak Janta Party, a breakaway outfit of the Chautala family.

The voting began at 7 am and continued till 7 pm in the evening, with long queues at polling station delaying the process. A total of 21 candidates are in the fray for the polls. A direct fight between BJP and INLD initially, the bypoll turned into a high-stakes contest after the Congress fielded Jat leader and AICC communication in-charge Randeep Singh Surjewala, while the JJP nominated political greenhorn Digvijay, the brother of Dushyant Chautala, who has been expelled from the INLD on charges of indiscipline amid a family feud.

Voting started today at 7 am for Jind bypoll. Here are the HIGHLIGHTS

Over 70 per cent turnout at Jind

Over 70 per cent turnout was reported on Monday in the by-election to the Jind assembly constituency in Haryana.

For the first time in Haryana, Voter Verifiable Paper Audit Trail (VVPAT) machines have been used at each polling booth which will enable the voter to know if the vote cast by him or her has gone to the account of the chosen candidate. However, a large number of voters were ignorant about the concept

Over 60 per cent polling recorded till 3 pm

Over 60 per cent polling was recorded till 3 pm in Haryana's Jind assembly bypoll.

Stills from the polling booths 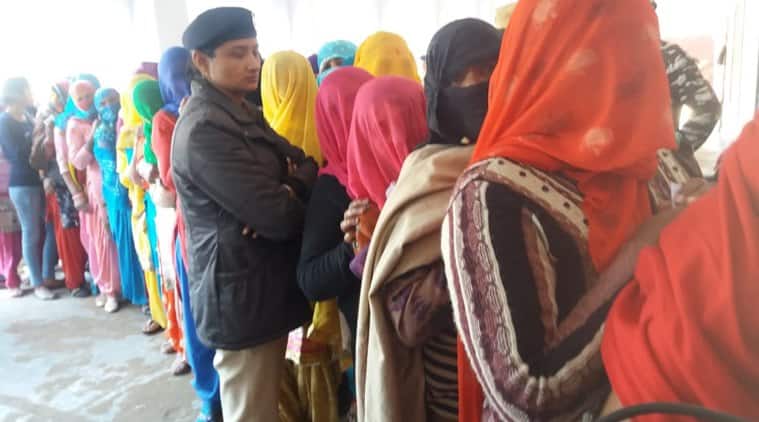 Poll updates: 52 per cent voting completed. Polling ends at 5 pm but due to long queues, it may go on till late in the evening.

BJP's candidate, Krishan Midha is 48 years old and has assets worth Rs. 1.56 crores and liabilities worth Rs. 6.38 lakh.

Out of the three key contestants in Jind bypoll, Digvijay Chautala is the youngest and wealthiest. He is contesting as an Independent candidate, but has support of recently formed political party Jannayak Janata Party (JJP). The new political outfit was formed by his father Ajay Chautala after split with Indian National Lok Dal. Aam Aadmi Party has also announced its support to Digvijay. Digvijay Chautala, 27 years old, has a total assets worth Rs. 23.41 crores and liabilities worth Rs. 9.63 crore.

Till 1pm, about 42 per cent polling has been recorded in the high-stake multi-cornered bypoll to the Jind assembly constituency, according to Jind DC Amit Khatri.

INLD's Hari Chand Midha had secured victory over BJP's Surinder Singh Barwala by barely 2257 votes. It was Midha's demise in August, last year that led to Jind's bypoll, voting for which is going on today. Midha's son Krishan Midha had quit INLD, post his father's death and joined BJP. Considering Midha family's close ties with the people of constituency, BJP fielded him as its candidate. he illegal coal mine in Ksan area

Till 10.30 pm, about 25 per cent polling has been recorded in the bypoll to the Jind Assembly constituency in Haryana on Monday, PTI reported. People, including nonagenarians, queued up outside polling stations since early morning despite cold weather conditions. No untoward incident has been reported from anywhere, officials said. 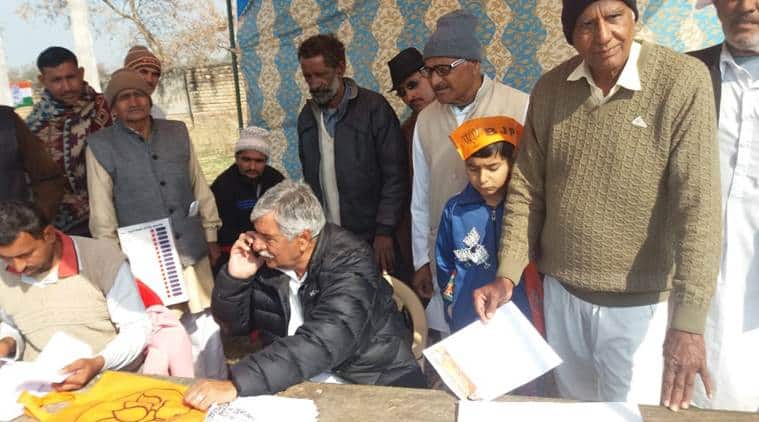 Former LS MP Surender Barwala at a camp of BJP near a polling booth in Sangatpura village. (Express photo)

Controversy over tea being served to voters in cup and plate

A controversy erupted after tea was served to voters in cup and plates near polling booths. Cup-plate is the election symbol of Lok Sabha MP Dushyant Chautala's brother Digvijay Chautala, who is contesting as an Independent. 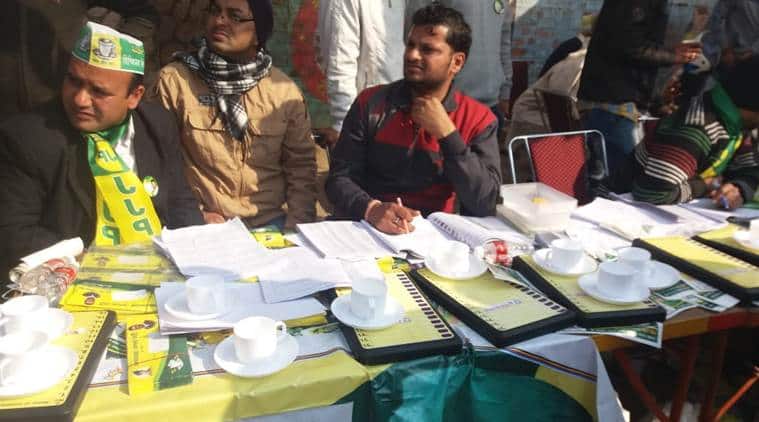 People will see a positive change in politics: Digvijay Chautala

Digvijay Chautala of Jannayak Janta Party says he was confident of his win in the Jind bypoll. "We are confident. People will see a positive change in politics. Politics that will rise above religion, caste and creed," ANI quoted him as saying. Since the JJP is yet to be registered with the Election Commission, Digvijay is contesting as an Independent.

The bypoll will also be a test for the influence of Manohar Lal Khattar-led BJP government among voters with the Chief Minister and other senior ministers camping in the constituency. In the 2014 assembly elections, the INLD got 31,631 votes, followed by the BJP (29,374) and Congress (15,267). Here are some visuals of voting in the Jind constituency: 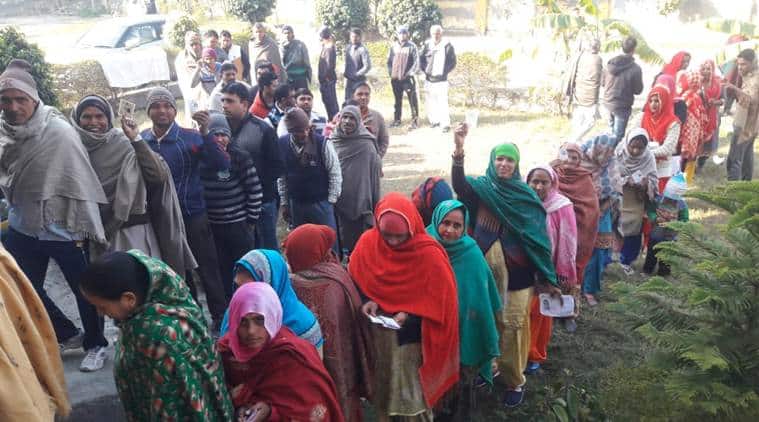 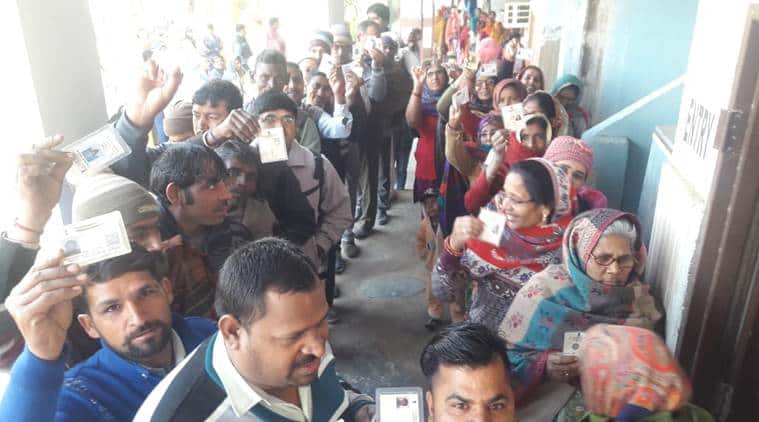 Bypoll to Haryana's Jind seat sees 15 per cent voter turnout in first two hours. "The poll percentage till 9 am was 15 per cent," IANS quoted the District Electoral Officer Amit Khatri as saying.

Meanwhile, voting is also underway in Ramgarh constituency in Rajasthan's Alwar district. Polling is taking place at 278 booths as it could not be held along with other 199 constituencies on December 7 due to the death of BSP candidate Laxman Singh. The constituency is witnessing a three-way contest between BSP, BJP and Congress. The BSP has fielded former Union minister Natwar Singh's son Jagat Singh, while former Alwar Zila Pramukh Shafia Zubair Khan is contesting as a Congress candidate. Former Pradhan Sukhwant Singh is the BJP candidate.

Rajasthan: Voting is underway for the by-poll to Ramgarh assembly constituency. pic.twitter.com/OpNX3I4TyI

Jind bypoll: Despite chill, voters line up across 158 polling booths

Despite the early morning chill, voters could be seen queued up at some of the polling stations. Jind assembly segment has been divided into 24 sectors, with six deputy superintendents of police being made in-charge to oversee security arrangements.

Haryana’s Jind bypoll will decide fate of new outfit Jannayak Janata Party formed by Lok Sabha MP Dushyant Chautala. He fielded younger brother Digvijay for the Jind bypoll as an independent candidate as the party is still in the formation process. Digvijay has campaigned extensively in rural areas with his brother Dushyant. The fledgling JJP got a boost with the AAP announcing its support to it and Delhi Chief Minister Arvind Kejriwal canvassing for Digvijay at a rally recently. 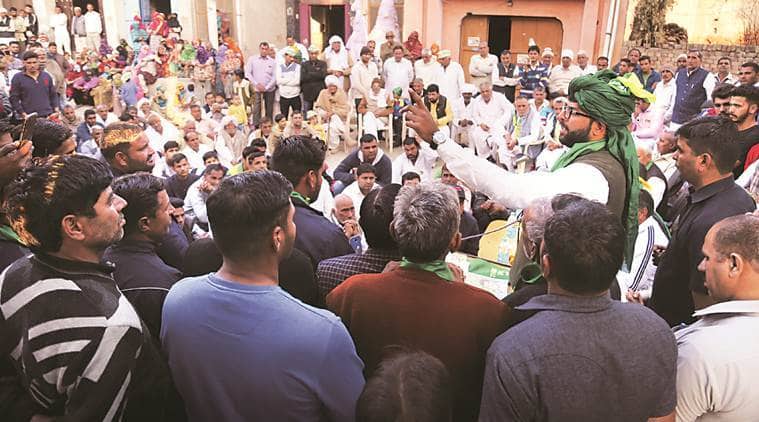 While Randeep Singh Surjewala has sought vote promising all-round development of Jind, Krishan Middha has sought to bank upon the developmental works done by the BJP government in Haryana. During campaigning, Chief Minister Manohar Lal Khattar criticised Surjewala claiming he would spend most of his time in Delhi. The chief minister also attacked the JJP blaming it for a split in the Chautala family. Political pundits, however, see the poll balance tilting in favour of the BJP owing to likely division of the dominant Jat community’s votes among Surjewala, Redhu and Digvijay.

The bypoll was necessitated following the death of INLD legislator Hari Chand Midha last year. Ruling BJP is banking on Middha's son Krishan Middha, a Punjabi, while INLD has nominated local Jat leader Umedh Singh Redhu, who is also backed by a faction of prominent Kandela Khap (a caste council).