The curfew had been imposed in Jammu since August 05. REUTERS/Danish Ismail

Kashmir Article 370 Highlights: Days after imposing section 144, the government on Friday said that the restrictions will be reduced in Jammu and schools will open on Saturday. The Jammu and Kashmir administration in an order withdrew the Section 144 which had been imposed since August 5.

Meanwhile, Ministry of External Affairs reacting on the suspension of Samjhauta Express between New Delhi and Attari Friday called it a “unilateral decision” by the neighbouring country. Addressing a press briefing, MEA Spokesperson, Raveesh Kumar said, “It is a unilateral decision, we never asked for it and we regret this decision by Pakistan which is intended to feed the narrative that the relation between India and Pakistan have reached an alarming state.”

Meanwhile, CPI(M) general secretary Sitaram Yechury and CPI’s D Raja were detained at the Srinagar airport on Friday, according to news agency PTI. “They showed us a legal order which did not allow any entry into Srinagar. It stated that even escorted movement in the city was not permitted due to security reasons. We are still trying to negotiate with them,” Yechury told PTI over the phone. The Left leaders had written separate letters to J&K Governor Satya Pal Malik Thursday informing him of their visit to the state.

The Indian Navy has put all its warships and key assets on high alert for quick operational deployment in the wake of the government's decision to revoke special status to Jammu and Kashmir and split the state into two Union Territories, official sources said on Friday. All naval stations have also been put on high alert to effectively deal with any possible security challenges, they said. The Army and the Indian Air Force were also put on high alert following the government's far reaching decision on Jammu and Kashmir on Monday. (PTI) 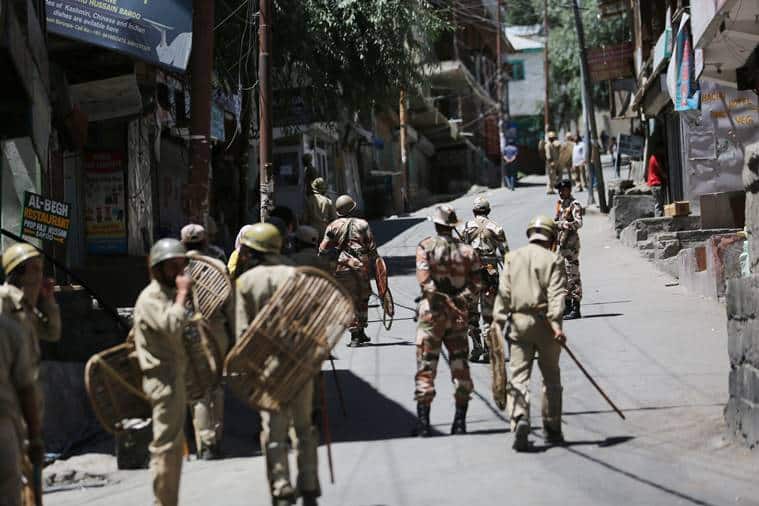 Two new UTs will come into existence on October 31 National Security Advisor (NSA) Ajit Doval met Jammu and Kashmir Governor Satya Pal Malik at the Raj Bhavan here on Friday, an official spokesperson said. The NSA, who has been camping here since Tuesday to take stock of the ground situation in the state, discussed the prevailing scenario with the governor, he said. (PTI)

Section 144 to be withdrawn from Jammu, schools to open tomorrow. pic.twitter.com/k3cTGZuJ58

Situation under control in Kashmir: Police

"There is a feeling that Pakistan is nervous over India's initiative in Jammu and Kashmir," MEA Spokesperson Raveesh Kumar said. "Pakistan thinks it will not be able to mislead people if there is development in Jammu and Kashmir," he said. On consular access to Indian national Kulbhushan Jadhav, he said: "We are in touch with Pakistan."

Indian High Commission to Pakistan yet to return to New Delhi

The Indian High Commissioner to Pakistan has not yet reached New Delhi, the MEA said that timing of his return is yet to be discussed. India has asked for a review from Pakistan.

Pakistani airspace is not closed, only re-routing has been done, airspace is operational. It is time for Pakistan to accept the reality and stop interfering in the internal affairs of other countries.

India has explained its position on J&K to United States: MEA

We have reached to several countries and explained our position. Senior officials of Government of India reached out to ambassadors and envoys and contacts have been made at MEA level as well. We did reach out to all countries including the United States.

Steps taken under Article 370 is our internal matter pertains to constitutional jurisdiction of the country. We will see what Pakistan does going forward and speak at that time. on Samjhauta Express: It is a unilateral decision we never asked for it and we regret this decision by Pakistan which is intended to feed the narrative that the relation between India and Pakistan have reached an alarming state.

MEA Spokesperson Raveesh Kumar in a media briefing said that India has apprised several nations on the decisions surrounding Jammu and Kashmir and expressed it clearly that it is an internal matter of India.

Pak must be "thanked" for downgrading ties with India: Sena

The Shiv Sena on Friday said Kashmir was now a closed chapter for Pakistan and asserted that Islamabad downgrading diplomatic ties with India post removal of special status for the border state will hurt it more than New Delhi. Early this week, the Centre revoked special status to Jammu and Kashmir accorded under Article 370 of the Constitution and bifurcated the state into two Union Territories -- Jammu and Kashmir, and Ladakh. Pakistan on Wednesday expelled Indian High Commissioner Ajay Bisaria as part of its decision to downgrade the diplomatic ties with India over what it called New Delhi's "unilateral and illegal" move on J&K. (PTI)

The Centre on Friday started registration for the Pradhan Mantri Kisan Maan-Dhan Yojana (PM-KMY), a pension scheme for farmers announced in the Union Budget. The scheme will be implemented across the country, including Jammu and Kashmir and Ladakh. "Today, the PM-KMY registration process has commenced across the country. Till noon, 418 farmers have registered and I request more farmers to join the scheme," Agriculture Minister Narendra Singh Tomar said. (PTI)

After Pakistan banned the screening of Indian films, All Indian Cine Workers Association (AICWA) wrote to PM Modi demanding a ban on Pakistani artists, diplomats & bilateral relations with Pakistan and its people. "Entire film industry and cine workers have refused to resume work, till there is a complete ban of Pakistani movie makers, artists, and trade partner." Security forces on high alert in valley as restrictions eased

Restrictions were eased to allow people in Kashmir to offer Friday prayers in local mosques, officials said on Friday as security forces were put on high alert across the Valley in an apparent move to prevent possible protests. The decision to ease the restrictions was taken after National Security Advisor Ajit Doval directed authorities to ensure that no Kashmiris were harassed, they said. Security forces have been put on high alert across the Kashmir Valley preempting possible protests against the scraping of special status. (PTI)

The CPI(M) on Friday hit out at the government for detaining its general secretary Sitaram Yechury and CPI leader D Raja at Srinagar airport, saying it was an "anti-democratic" act, which showed the ruling BJP's "authoritarian face". The Left leaders had gone to Srinagar to meet CPI(M) MLA Md Tarigami and other party colleagues. "The politburo calls upon the people to protest this anti-democratic act of the BJP government," the statement said. (PTI)

On Thursday, protests erupted in Kargil district of Ladakh following which several people were detained. Some protesters reportedly threw stones at the security forces, following which there was lathicharge and use of tear-gas. Section 144 continues to be in place across J&K.

On August 5, Union Home Minister Amit Shah announced the revocation of certain provisions of Article 370 through a Presidential Order. The order also sought to bifurcate the state into two union territories — Jammu and Kashmir and Ladakh. On Tuesday, Parliament ratified the Jammu and Kashmir Reorganisation Bill, 2019. Justifying the government’s move, the prime minister said Pakistan was using Article 370 as a tool to spread terrorism. “Over 42,000 people died. Article 370 and Article 35 (A) did not give anything except separatism, corruption, terrorism and family rule,” Modi said.

Meanwhile, Kashmir remains in a state of lockdown since Sunday night, with heavy deployment of troops and the arrest of mainstream political leaders, including former chief ministers Mehbooba Mufti and Omar Abdullah.