Jammu and Kashmir Municipal Election 2018 Voting HIGHLIGHTS: After more than a decade, voters in J&K will elect their representatives to the state's 79 municipal bodies in the four-phased polls.

The first phase of the Jammu and Kashmir urban local body elections saw a bleak voter turnout as only 8.3 per cent eligible voters in militancy-hit Kashmir Valley came out to exercise their franchise on Monday, PTI reported. Pollings in 321 wards of 11 districts of J&K, which started at 7 am and continued till 4 pm, were largely peaceful despite few incidents of stone pelting being reported from some areas. Some 1,204 candidates were in fray for the first phase of the polls.

Kargil and Leh regions recorded high voter turnouts of 78 per cent and 52 per cent respectively, an official told PTI.

After the National Conference and the PDP announced to boycott the municipal polls, the contest is largely between the Congress, the BJP and a large number of independent candidates. Of the 598 seats in the Valley, at least 236 will be uncontested. Another 184 have received no nominations.

Voting begins for the first phase of the Jammu and Kashmir urban local bodies elections. Get LIVE UPDATES here.

Polling was held for only 83 wards in the valley Monday as 69 were won uncontested.

Only 8.3 per cent voters turn out in the Valley

The first phase of the Jammu and Kashmir urban local body elections saw a bleak voter turnout as only 8.3 per cent eligible voters in militancy-wrecked Kashmir Valley came out to exercise their voting rights on Monday, PTI reported. Polling in the 11 districts of J&K started at 7 am and continued till 4 pm.

Kargil and Leh regions recorded high voter turnouts of 78 per cent and 52 per cent respectively, an official told PTI.

Election in Valley: Pictures of the day 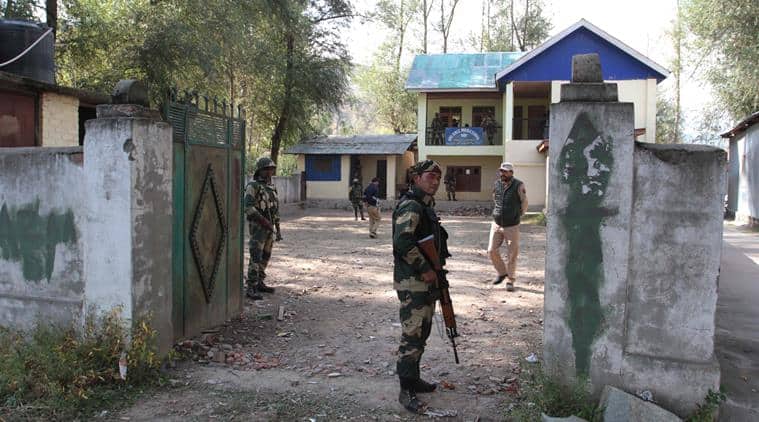 Election in Valley: Pictures of the day 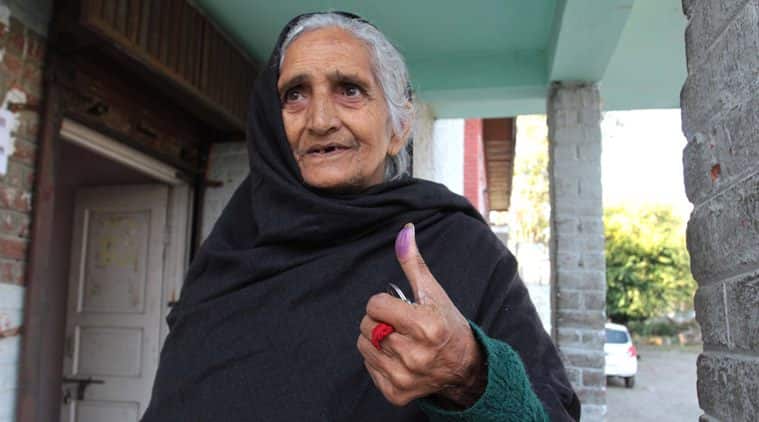 A sikh old woman leaves a polling station after casting her vote in Baramulla. (Express Photo by Shuaib Masoodi)

Normal life affected in the valley due to separatists strike

Normal life was hit in the Kashmir Valley Monday due to a strike called by the separatists against the holding of the local bodies' polls, the first phase of which began Monday morning across the state.

Shops, business establishments, private offices and fuel stations remained closed here in the summer capital of Jammu and Kashmir, officials said. They added that public transport was off the roads, while a few private cars, taxis and autorickshaws were seen plying in some areas of the city.

The separatists, under the banner of the Joint Resistance Leadership (JRL), had called for a shutdown on Monday against the holding of the local bodies' polls in the state. The JRL -- comprising Syed Ali Shah Geelani, Mirwaiz Umar Farooq and Mohammad Yasin Malik -- asked the people to observe a complete strike against the "so-called elections".

Only one vote registered in Janbazpora

North Kashmir Baramulla: At Janbazpora polling station, A and B: Only 1 vote till 1.30 pm out of registered 580 and 1097 votes. #Ulb polls @IndianExpress pic.twitter.com/sd29J6ZZqX

Till 1:30 pm, 98 votes were recorded in Kokernag; one vote was registered in two booths respectively. Meanwhile, internet services have been restored in some areas of Baramulla district.

In its 15-point manifesto which was released last week, the BJP highlighted issues such as restoration of Dal Lake, sanitation, prevention of vector-borne diseases and improvement of healthcare by opening evening clinics. While addressing a press conference in Srinagar, BJP leaders said that their priority will be to develop districts through municipal committees and corporations.

BJP candidate Adil Ahmad Buhru from ward 15 of Bandipora district was injured after a group of miscreants pelted stones at him while he was on his way to cast his vote at Dachigam, officials told PTI. Buhru was rushed to a nearby hospital, the official said, adding stone pelting was reported from several areas of the district. Condemning the attack, BJP spokesman Altaf Thakhur said those who indulge in violence are scared of democracy.

Voter turnout in Handwara at 11.30 am

"Nearly 1,600 voters have exercised their franchise till 9:00 am at the 150 pollings stations set up in 83 wards across Kashmir Valley where polling is going on today," an official was quoted as saying by PTI. Around 85,000 voters including 40,800 women are eligible to vote in the valley. Out of 30,074 voters in three wards of Srinagar Municipal Corporation, only 417 turned up at heavily-fortified polling stations.

16.5 per cent turnout in Handwara

Till 11:15 am, a voter turnout of 16.5 per cent was registered in Handwara municipality.

The urban local body polls were announced last month but two major political parties - National Conference and PDP - had boycotted the elections accusing the Centre of not taking a firm stand on the protection of Article 35-A of the Constitution which is facing a legal challenge in the Supreme Court.

Sources in Leh and Kargil towns of Ladakh region said biting cold kept voters away, though the process was expected to pick up as the day progressed and warmed up, IANS reported.

No campaigning, door-to-door canvassing, poll rallies were held in the Valley prior to the elections. Even the names of candidates who had filed nomination papers or their political affiliations were not disclosed until the names of a few of them got leaked on social media last week. Officials had cited “security reasons” for the veil of secrecy over the conduct of the “faceless” poll process, especially in the troubled south of the Valley. They said the disclosure of candidate details would make them vulnerable to threats, even endanger lives. Read full story here.

#JammuAndKashmir: Heavy security deployed at a polling booth in Baramulla as voting for local body elections is underway pic.twitter.com/zKZgO819KK

Meanwhile, Advocate Vijay Sharma, who was removed as BJP state secretary six months ago for spearheading an agitation seeking a CBI inquiry into the Kathua gangrape-murder case, is now the saffron party’s main face for Hiranagar Municipal Committee elections. If the party gets a majority in the municipal committee, Sharma is tipped to be its chairman. When contacted, Sharma told The Indian Express that he was initially reluctant to contest, but had to obey the party directive as he is its sincere and dedicated worker. “They had only removed me from the party post, I continued to be an active member,” he said. Sources close to Sharma said that he agreed to contest when senior party leaders promised him a BJP ticket for Hiranagar Assembly constituency whenever fresh elections are held. The constituency is at present reserved for Scheduled Caste candidates, but it is getting de-reserved, they added. Read full story here.

Voter turnout in Kokernag at 10 am

At 10 am, 61 votes have been registered in South Kashmir's Kokernag. The voters include 23 females. There are a total of 1,639 voters registered in the area.

On Sunday, senior police officials told The Indian Express that while security has already been in place for the polls, checking of vehicles has been further intensified in all districts of the Valley, especially in areas where polling will be held Monday. They said 400 more companies of central forces are also engaged for the polls. “Checkpoints have been set up in all areas, and vehicle (checking) has been intensified. We are taking all measures with regard to security and otherwise to ensure smooth polls,” said a J&K Police officer. Candidates have been provided security and accommodated at safe areas, officers said.