Jammu and Kashmir News Highlights: The Delhi Transport Corporation Monday cancelled the Delhi-Lahore bus service after Pakistan decided to discontinue the service in the wake of India's decision of revoking the special status for Jammu and Kashmir.

Locals attend Eid-al-Adha prayers at a mosque in Srinagar. (Reuters)

Eid in Jammu and Kashmir Highlights: National Security Advisor (NSA) Ajit Doval Monday conducted an aerial survey to take stock of the security situation in the Kashmir Valley as locals offered Eid prayers. The Ministry of Home Affairs (MHA) and the Jammu and Kashmir Police said that prayers were offered peacefully across local mosques despite restrictions in several locations.

Speaking on similar lines, the state police said that while large gatherings were not allowed in the Valley, people were allowed to visit the neighbouring mosques to offer prayers.

Meanwhile, the Delhi Transport Corporation Monday cancelled the Delhi-Lahore bus service after Pakistan decided to discontinue the service in the wake of India’s decision of revoking the special status for Jammu and Kashmir, news agency PTI reported quoting a statement.

Curfew was reimposed in Srinagar on the eve of Eid even as the administration listed several measures taken to restore normalcy in Jammu and Kashmir. Huge deployment of security forces, concertina wires and barricades were back on the roads and public movement was curbed on Sunday. At several places, police asked vendors to close their stalls and return home.

Voices from J&K must be heard: Manmohan Singh

In his first remarks after the central government abrogated Article 370 which gives special status to Jammu and Kashmir, former Prime Minister Manmohan Singh Monday said that the voices form the region must be and need to be heard, adding that the country is passing through a "deep-crisis" and needs the cooperation of like-minded people. "Its outcome is not to the liking of many people of our country. It is important that the voice of all these people be heard. It is only by raising our voice that we can ensure that in the long run, the idea of India, which is very sacred to us, will prevail," the former Prime Minister said. Read more

A Srinagar-based CRPF helpline which was restored on Sunday has been inundated with calls from Kashmiris living across the country and abroad seeking to know the wellbeing of their kin in J&K, officials said Monday. The 'madadgaar' helpline number - 14411 - has received over 870 calls over two days and over 55 per cent of the callers wanted to know about their families, they said. The five-digit landline number was only revived late Sunday night after it had gone dead due to the ongoing communication clampdown in the state post the government revoking its special status under Article 370. (PTI)

Hitting out at Congress leader Rahul Gandhi for his remarks that there have been reports of violence in the Valley, Jammu and Kashmir Governor Satya Pal Malik Monday said that he will send an aircraft for Gandhi to visit and observe the onground situation. "I have invited Rahul Gandhi to come here. I will send you a plane, to observe (the situation) and then speak up. You are a responsible person and you should not speak like this," the Governor said. He added that there was no communal angle in the scrapping of Article 370 which gives special status to Jammu and Kashmir, news agency PTI reported.

Jammu and Kashmir Governor Satya Pal Malik Monday said that Eid prayers were offered in all mosques in the Valley peacefully. "Today, namaz was offered by the people in every mosque. Namaz took place in every locality," he said, adding that security restrictions were relaxed on Saturday and Sunday for people to prepare for the festival. "But in troubled places, we will try to ensure peace because we don't want even a single life to be lost or people get injured. It is the responsibility of the government to protect our citizens," Malik added.

Union Minister Prakash Javadekar on Monday said that Eid was celebrated in the Valley with "great enthusiasm" and added that curfew and restrictions have been lifted off from several areas in Jammu and Kashmir. The BJP leader also dismissed "rumours" about the death of some people in a firing incident, and added that peace has been restored in the region, news agency PTI reported. Read more

The Jammu and Kashmir Police Monday said Eid festivities passed off peacefully, barring a few minor incidents, and there was no firing anywhere in the Kashmir Valley. Inspector General of Police SP Pani also said the Jammu and Kashmir administration was committed to maintaining peace and order and the police were working in this direction. "The Eid namaz was offered in different mosques and after the prayers, the congregations dispersed peacefully. There have been a couple of minor localised incidents of law and order which have been handled very professionally," he said. (PTI)

Security forces Monday refuted claims of clash between CRPF and the Jammu and Kashmir Police after a Pakistani journalist tweeted of the fratricide. The forces said the social media post was "malicious" and absolutely untrue and baseless. Kashmir Police, on their Twitter handle, said that the post had been reported to Twitter for action.

The Supreme Court is scheduled to hear on Tuesday a plea challenging the Centre's decision to impose restrictions and "other regressive measures" in Jammu and Kashmir following the revocation of the provisions of Article 370. The plea filed by Congress activist Tehseen Poonawalla is listed for hearing before a bench comprising Justices Arun Mishra, M R Shah and Ajay Rastogi. Besides, a separate petition filed by Anuradha Bhasin, Executive Editor of Kashmir Times, seeking removal of restrictions imposed on working of journalists in the state after the scrapping of provisions of Article 370 is likely to be mentioned for urgent listing in the apex court. (PTI)

Kashmiri students studying at Aligarh Muslim University (AMU) Monday boycotted the Eid lunch invite from the liaison officer of the central government to protest the abrogation of Article 370 which gives special status to Jammu and Kashmir. A statement released by the students said that the lunch was aimed at "rubbing salt on the wounds of the people of Kashmir". AMU officials confirmed the boycott, reported news agency PTI, and said they were taking all necessary steps to "instill confidence" in the students and ensuring their safety and security, as advised by the central government.

Several BJP leaders condemned senior Congress leader P Chidambaram's comment that the Union government would not have abrogated the special status to Jammu and Kashmir had the state been a Hindu-dominated state. While Union Law Minister Ravi Shankar Prasad alleged that the former Finance Minister's comments were "very irresponsible and provocative", BJP leaders Mukhtar Abbas Naqvi and Shivraj Singh Chouhan said the Congress was giving the issue a communal angle. Naqvi added that the government has rectified a very big mistake made decades ago by the Congress.

The Jammu Police Monday issued an advisory to the general public and sought for complete cooperation for a secure and successful celebration of Independence Day. The police asked the people to report any person or object which looks suspicious. The advisory also asked the people to not carry arms and ammunition, sharp-edged weapons, hand bags, polythene bags, transistors, hand fire extinguishers, stop watch, any kind of powder, inflammable material like cigarettes, match boxes, lighter, cameras and alike objectionable items. (PTI)

Delhi Transport Corporation (DTC) Monday cancelled the Delhi-Lahore bus service after Pakistan decided to discontinue the service in the wake of India's decision of revoking the special status for Jammu and Kashmir, a statement said. "Consequent to Pakistan's decision to suspend the Delhi-Lahore bus service, DTC is not able to send bus (from Delhi to Lahore) from August 12," the DTC statement read. A DTC bus was scheduled to leave for Lahore on Monday at 6 am but was stopped after Pakistan's decision. (PTI)

Meanwhile, in Punjab, Chief Minister Amarinder Singh invited around 125 Kashmiri students from various universities for lunch at Punjab Bhavan today. Assuring the Kashmiri students of their safety in the state, the chief minister said, “We cannot replace your families but I hope you consider us as your family too."

The Srinagar-based CRPF helpline- 14411- has been re-activated for people, especially Kashmiris, who require help for their families or are in distress post the decision to abrogate provisions of Article 370, officials said today. They said the standard five-digit landline number of the 'madadgaar' helpline has been restored after it went inactive due to the communication clampdown in the Kashmir Valley. Over 500 calls have been received on the helpline number, 14411, since late Sunday, they said. 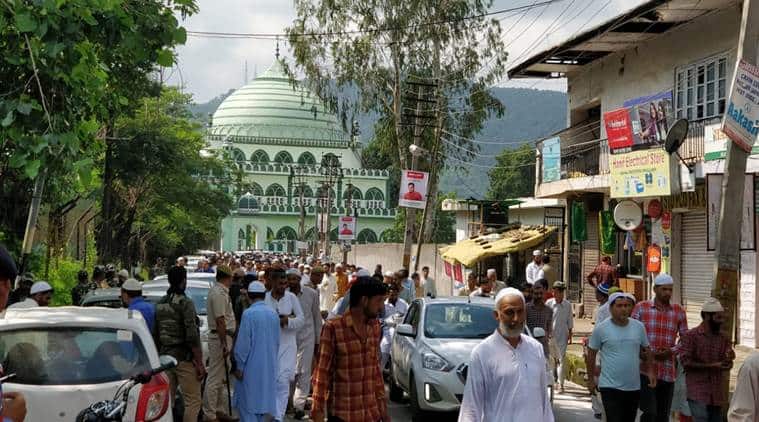 Locals after offering prayers at a mosque in Rajouri district on Monday. (Home Ministry)

No exchange of sweets along Indo-Pak border on Eid

The customary exchange of sweets between the BSF and Pakistan Rangers along the international border did not take place today on the occasion of Eid al-Adha, officials said, PTI reported. They said the Pakistani side did not respond to Border Security Forces' move to exchange sweets and greetings along the IB running through the states of Jammu, Punjab, Rajasthan and Gujarat. "The customary event did not take place on the occasion of Eid al-Adha on Monday," a senior official was quoted as saying by the news agency. Click here to read more.

On Sunday morning, there was some movement of private vehicles and vendors set up bakery stalls along the streets of Srinagar city. Queues could be seen outside the ATMs that were working. But by afternoon, J&K Police vehicles were seen driving around parts of Srinagar, announcing that curfew had been re-imposed, and asking people to return home. “Apne gharun main wapis jayein. Curfew doobara se nafiz huwa hai (Go back to your homes, curfew has been re-imposed),” they announced. There was no official statement on why the restrictions were back in place.

There are fears that large gatherings could trigger protests, after some incidents of stone-pelting were reported after the Friday prayers. J&K Director General of Police Dilbag Singh told Reuters that 1,000-1,500 people were returning from praying at mosques on Friday when “some miscreants” started pelting stones at security officials. “It was a reaction to stone-pelting by these miscreants that one or two rounds of pump-action gun was fired,” Singh said, adding that four to five men suffered injuries. Around 300 local leaders had been detained, and some of them had been taken out of Kashmir, he said.