Congress leader P Chidambaram bail petitions in the INX Media case were rejected by the Delhi High Court on Tuesday.

In a dramatic press appearance in the evening, former finance minister P Chidambaram claimed that the FIR lodged against him does not accuse him of any wrongdoing. “If I’m asked to choose between life and liberty I shall unhesitantly choose liberty. Between now and Friday, I will walk with a clear conscience and my head held high,” he said while addressing the media.

Earlier today, the Supreme Court listed Chidambaram’s bail plea, seeking protection from arrest, for Friday. Meanwhile, Enforcement Directorate (ED) and the CBI issued a look out notice against Chidambaram and both investigative agencies, earlier in the day, filed a caveat against the former finance minister in the top court. Chidambaram’s plea in the apex court now becomes infructuous as he was seeking protection from arrest. Chidambaram will now have to seek bail before the Rouse Avenue court where the INX Media case is being heard.

In a dramatic turn of events Wednesday night, personnel of the Central Bureau of Investigation (CBI) scaled the boundary walls of the New Delhi residence of senior Congress leader and former Union Minister P Chidambaram and arrested him, in full media glare, in connection with its probe into alleged charges of corruption in the INX Media case. A team of the Enforcement Directorate, probing alleged money laundering charges, also showed up at Chidambaram’s Jor Bagh residence who was taken away in a CBI vehicle at 9.45 pm. Read the full story here

Congress leader and former finance minister P Chidambaram has been brought to the CBI headquarters in Delhi.

We will go to court, will be vindicated eventually: Karti Chidambaram

Karti Chidambaram: "ED has summoned him a number of times and he has appeared every time. We will go to the court, we will be vindicated eventually."

When asked who is responsible for the "spectacle" behind Chidambaram's arrest, Karti said, "All of this is being done by BJP. Who else? You think Donald Trump? No."

No chargesheet was filed against him, a spectacle made: Karti Chidambaram

Minutes after the former finance minister P Chidambaram was apprehended by the CBI, his son Karti addressed the media and said no chargesheet was filed against his father in the INX Media case. "This is a totally politically motivated witchhunt. A spectacle has been made," he said. 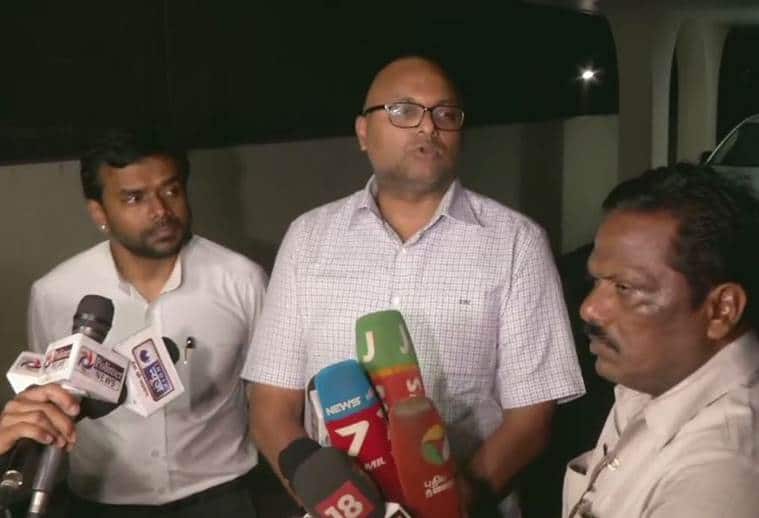 Watch: CBI takes away Chidambaram from his residence

#WATCH P Chidambaram taken away in a car by CBI officials. #Delhi pic.twitter.com/nhE9WiY86C

The CBI has finally arrested P Chidambaram after almost an hour of drama outside his residence. The former finance minister was driven out in the CBI car, TV news channel NDTV flashed.  The team of about 30 CBI sleuths accompanied by Delhi police officials reached the Jor Bagh residence of Chidambaram and knocked at the doors for a few minutes before scaling the boundary wall to enter the premises.

Drama enacted by agencies is to sensationalise voyeuristic pleasure of some: Karti Chidambaram

Karti Chidambaram, son of the former finance minister says "The drama and spectacle being enacted by the agencies is to simply sensationalise and satisfy the voyeuristic pleasure of some."

Moments after Chidambaram concluded briefing the media, the CBI arrived at his Jor Bagh residence in Delhi. Minuter later the CBI was joined by the Enforcement Directorate (ED) and the Delhi Police at his house. CBI officials scaled wall to enter Chidambaram's residence. The team of about 30 CBI sleuths accompanied by Delhi police officials reached the Jor Bagh residence of Chidambaram and knocked at the doors for a few minutes before scaling the boundary wall to enter the premises, PTI reported.

Aghast I was accused of hiding from law: Chidambaram at presser

Chidambaram: "I am aghast that I was accused of hiding from the law, on the contrary, I was seeking the protection of law. My lawyers tell that cases will be listed on Friday. I bow down to orders of SC. I respect the law even if it is applied with an unequal hand by probe agencies.

"Until Friday and beyond, let's hope the lamp of liberty will shine bright and illuminate the whole country," he says.

Chidambaram: "Some days ago, when I spoke in Parliament, I had said that every Judge in this country will uphold the liberty of a citizen. I had said that the collective conscience and the institutional memory of the court, as a venerable institution, will guide all Judges of the country. As much as I believe in liberty, I also believe in the wisdom of our Judges."

No chargesheet filed against me: Chidambaram to media

Chidambaram: "I enjoyed interim protection for 18 months. After seven months, the Delhi High Court cancelled my interim bail. No chargesheet has been filed against me in the INX Media case."

"I was accused of hiding from the law, on the contrary, I was seeking the justice of the law," he says.

"Between now and Friday, I will walk with a clear conscience and my head held high. I will also pray that the investigative agencies will also follow the law. I shall respect the law even if it applied with an uneven hand," Chidambaram says.

Have not been accused of any offence: Chidambaram

Chidambaram: "The most precious article is article 21. If I'm asked to choose between life and liberty I shall unhesitantly choose liberty. "

"I have not been accused of any offence. FIR does not accuse me of any wrongdoing. These are lies spread by pathological liars," he says.

Chidambaram must face consequences if he has done something fishy: BJP

The BJP spokesperson Shahnawaz Hussain said he Centre did not interfere in Chidambaram's investigation and he must face the consequences for his deeds, PTI reported.

"If he has done something fishy, he must face consequences. Probe agencies do not work at the government's behest. They have powers to act independently," PTI quoted Hussain as saying.

What has happened so far?

* On Wednesday morning, Sibal along with a team of lawyers, including Salman Khurshid, Vivek Tankha and Indira Jaising, filed a Special Leave Petition (SLP) in the top court seeking interim relief against the HC order. “The matter should be heard. I (Chidambaram) should not be arrested in the meanwhile,” the petition stated.

* Chidambaram’s counsel Sibal mentioned the matter before a bench comprising of Justices N V Ramana, M Shantanagoudar and Ajay Rastogi and asked for an urgent hearing before the Chief Justice of India Ranjan Gogoi.

* Meanwhile, the Enforcement Directorate (ED) issued a lookout notice against Chidambaram. They said the alert against the Congress leader has been sent to all land, air and seaports.

* Moments later, the CBI and the ED filed a caveat in SC on Chidambaram’s plea seeking protection from arrest. The intention was that the top court should hear the probe agencies first before passing any order in the matter.

* Meanwhile, the Registrar (Judicial) of the Supreme Court pointed few defects in the SLP filed by Chidambaram’s counsel, preventing the case to be listed for today. The Registrar later informed the SC had listed the case for Friday.

Congress will be holding a presser in relation to the case at 8.15 pm today at the AICC headquarters. The media briefing will be held by senior advocates Kapil Sibal, Abhishek Singhvi, Salman Khurshid and Vivek Tankha.

The CBI has issued a lookout circular against Chidambaram to prevent him from leaving the country, PTI quoted officials as saying. The agency has alerted all airports to prevent Chidambaram from boarding a flight, adding that the circular was issued recently, PTI reported.

Earlier today, the ED too had issued a lookout notice against the former finance minister.

The Supreme Court is likely to hear Chidambaram's plea on Friday.

The bench of the CJI has risen for the day, while Chidambaram's plea was not mentioned as planned, PTI reported. Chidambaram's lawyers had assembled in the courtroom of Chief Justice of India Ranjan Gogoi where Ayodhya case was being heard. They were likely to mention his plea again.

Counsel for the Congress leader says they are waiting for Registrar's message on listing the petition, PTI reported. Chidambaram's lawyers are trying to list the matter in court today itself, PTI stated. Chidambaram's team of lawyers are having deliberations in the consultation room in the top court, according to PTI.

Earlier today, Solicitor General Tushar Mehta, appearing for the CBI and the ED told the bench that it was a case of money laundering of "monumental magnitude", PTI reported. "We are ready and fully prepared to oppose any move by Chidambaram," PTI quoted one of the law officers assisting Mehta as saying.

Reading from the petition, Sibal said, " "The matter should be heard. I (Chidamabaram) should not be arrested in the meanwhile," PTI reported.

The Supreme Court refuses for urgent listing of Chidambaram's plea against the Delhi High Court order, PTI reported.  The high court on Tuesday had rejected the Congress leader's anticipatory bail application in two cases of alleged corruption and money laundering linked to the INX Media.

According to PTI, the top court said the defects in the petition were removed just now and it "cannot be listed for hearing today itself".

The bench comprising of Justices N V Ramana, M Shantanagoudar and Ajay Rastogi said, "Without listing of the petition, we cannot hear the matter," PTI reported.

When Sibal repeatedly asked for hearing the matter today, the bench responded, "Sorry Mr Sibal. We cannot hear the matter," according to PTI.

While dismissing his pleas, the Delhi High Court had said “facts of the case prima facie reveal that” he is the “kingpin that is the key conspirator in the case”. Justice Sunil Gaur vacated his July 25, 2018 order granting interim protection from arrest in both the cases, which was being extended from time to time. “Both applications (seeking anticipatory bail) are dismissed,” the judge said.

CBI had registered an FIR on May 2017, alleging irregularities in the Foreign Investment Promotion Board (FIPB) clearance given to the INX group for receiving overseas funds of Rs 305 crore in 2007. Chidambaram was the Union Finance Minister at the time. He is also under the scanner of the investigating agencies in the Rs 3,500-crore Aircel-Maxis deal. His son Karti Chidambaram is also an accused in the case and was arrested by the CBI on February 28 last year. Later he was granted bail by the Delhi High Court.