His Cabinet ministers Amit Shah and Rajnath Singh were seen participating at Rohtak and New Delhi, respectively. In Delhi, a host of events have been planned to mark the day on June 21. At a park opposite the BJP headquarters in the national capital, working president JP Nadda performed yoga along with other party leaders. Besides, newly-elected Lok Sabha Speaker Om Birla participated in an event held on the premises of the Parliament House complex.

On Thursday, the United Nations headquarters was lit up with postures of ‘Surya Namaskar’ and the message of ‘Yoga for Climate Action’. Yoga postures were projected on the North Facade of the UN Headquarters Building during a special ceremony attended by India’s Permanent Representative to the UN Ambassador Syed Akbaruddin, Deputy Permanent Representative Ambassador K Nagaraj Naidu and diplomats and officials from the Indian mission. The North Facade of the UN Secretariat building was awash with ‘Surya Namaskar’ or ‘Sun Salutation’ postures projected against a colourful background.

The 5th International Yoga day was observed across Jammu region Friday with people from all walks of life besides army, police and other security personnel performing various asanas at the place of their postings.

The highlight of the event was the special show of Yoga by Army and BSF dog squads alongside their trainers at different camps, officials said.
They said Yoga camps were also conducted in various jails during which prisoners and jail staff performed Yoga to mark the international Yoga day.

The biggest function in Jammu saw hundreds of people turning up at Hakku Hockey Stadium near Jammu university to take part in the programme organised by various organisations.

State BJP president Ravinder Raina and other senior party leaders also joined the participants, highlighting the importance of various asanas and urging people to adopt these in their daily life for good health. (PTI) 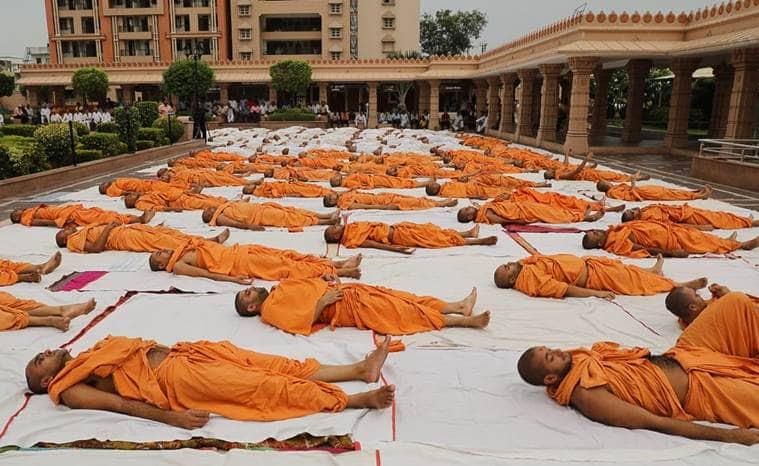 'None of the postures being performed as part of yoga have connection any religion': Pinarayi Vijayan on Yoga Day

Kerala CM in Trivandrum: Some ppl are deliberately trying to mislead others regarding yoga. As if this is something religious, some ppl have even made such remarks. In fact, none of the postures being performed as part of yoga have any connection with any religion. #YogaDay2019 https://t.co/Haxbnd4v0B

Naval officers and cadets perform yoga on board the decommissioned INS Viraat to mark the 5th International Day of Yoga, at Naval Docks in Mumbai on Friday Morning. 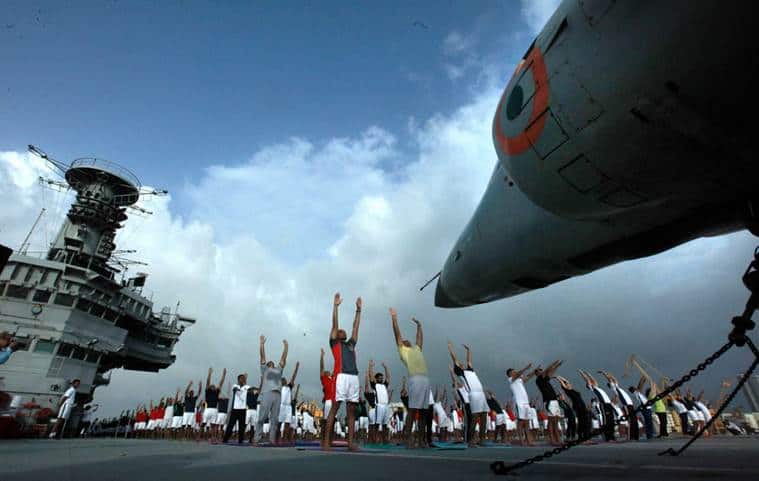 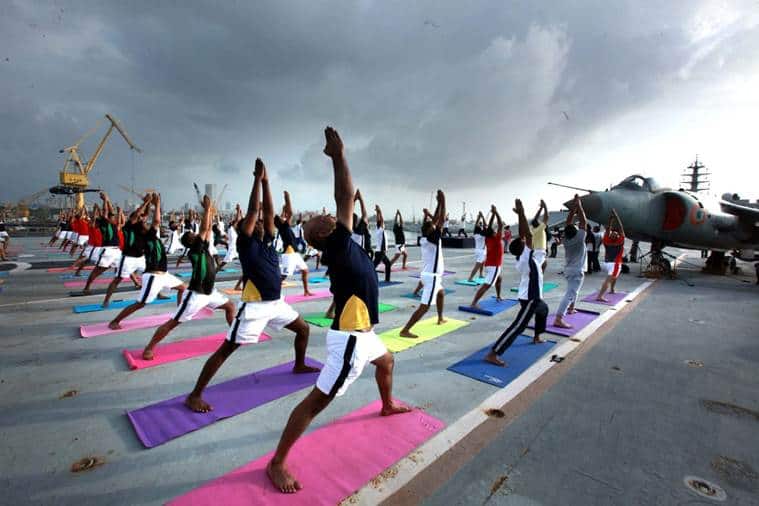 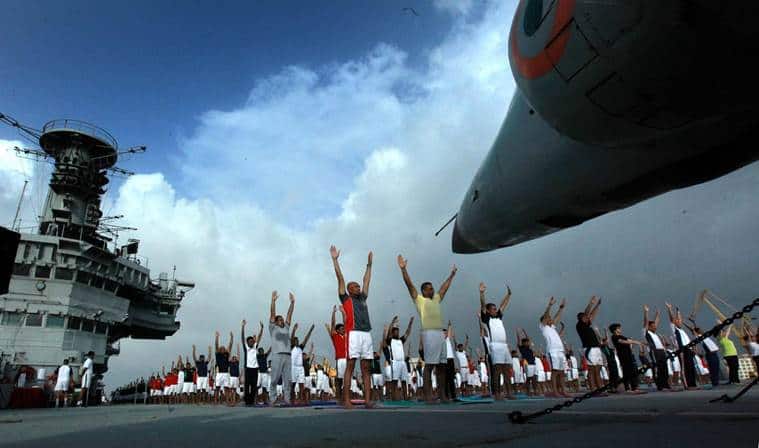 Ayush Ministry shares a 'Yoga day' protocol with yogasanas on it

Ayush Ministry on the occasion of International Yoga Day has shared an image with different yoga posas to perform and practice. 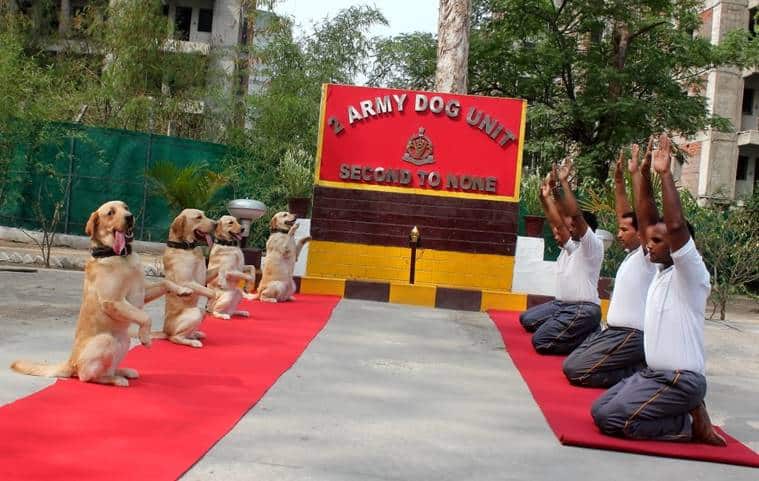 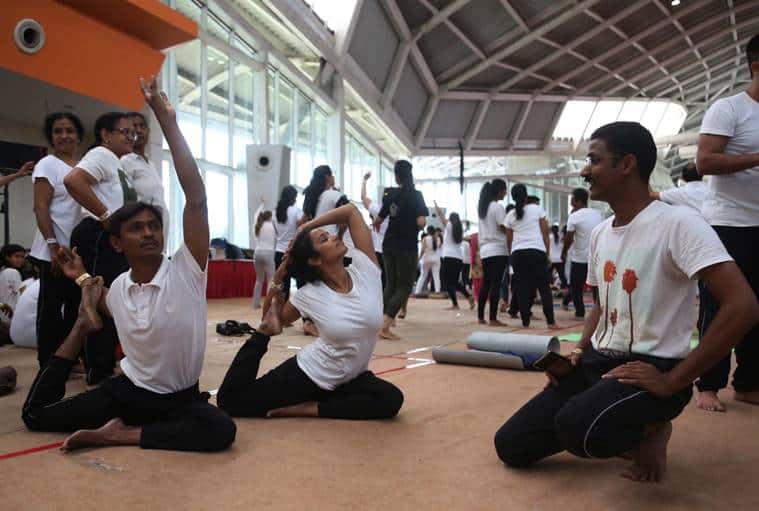 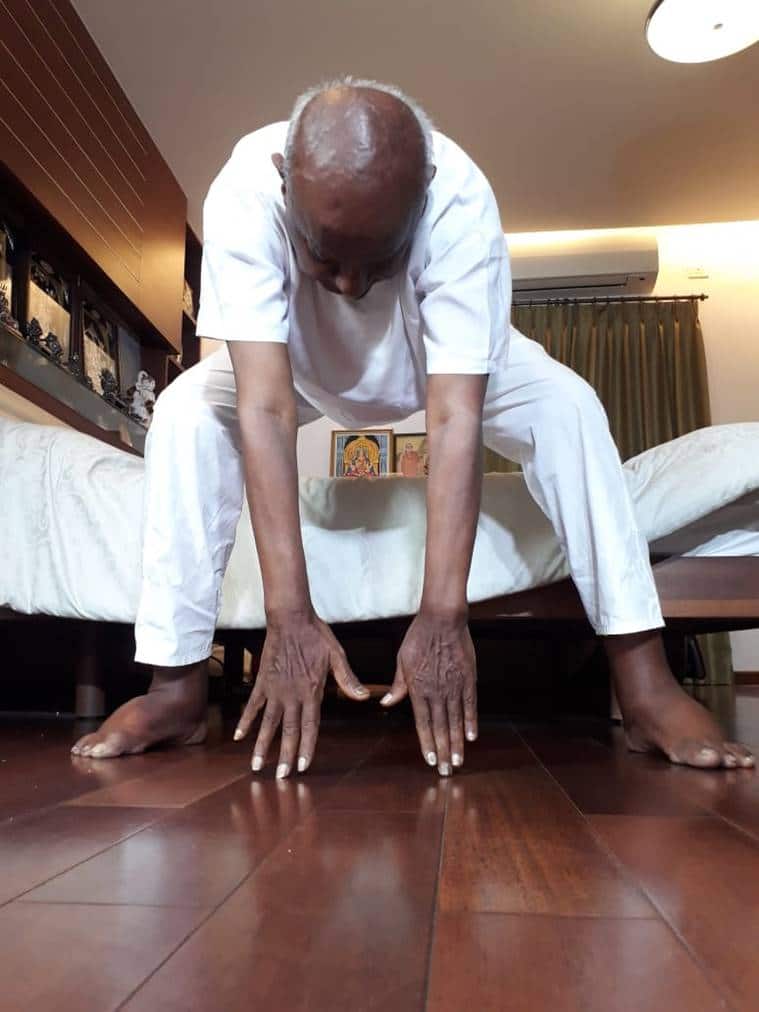 "UN is the place where yoga was transformed into annual global observance, holds special place"

Syed Akbaruddin, India's Permanent Representative to UN Ambassador on the occasion of International Yoga Day at UN Headquarters in New York, said: "UN has a special place in the remarkable growth of Yoga in our own lifetimes. It was here that ancient practice of Yoga was transformed into an annual global observance." Speaking on 'Climate change' which is the theme this Yoga Day, he added, "I hope this indoor yoga session in Gen Assembly hall, the first of its kind, will reinforce values of cleaner,greener&more sustainable future that all of you yogis are committed to."

East Delhi MP Gautam Gambhir with MLA O L Sharma and others on the occasion of International Yoga Day at Yamuna Sports ground. I express my great gratitude to the Prime Minister for giving a global form to Yoga: Amit Shah in Rohtak

Home Minister Amit Shah accompanied by Haryana Chief Minister  Manohar Lal Khattar attended a yoga session in Rohtak and said, "On International Yoga Day, I express my great gratitude to the Prime Minister for giving a global form to Yoga. The knowledge of yoga is for the welfare of the whole world."

Yoga day sessions underway in different parts of the country Actress Shilpa Shetty who is known to practice Yoga regularly takes a session in Mumbai's Gateway of India.

Yoga is ancient yet modern, constant and evolving: PM Modi in Ranchi

Yoga is ancient and modern. It is constant and evolving. For centuries, the essence of Yoga has remained the same. Today, if our world is adopting yoga, we also have to focus on research related to yoga. For this, it is important that we do not keep yoga bound as the science needs to be added to the fields of Medicine, Physiotherapy, Artificial Intelligence: PM Modi in Ranchi

Yoga Day 2019: The Delhi BJP will host around 300 yoga sessions across the national capital, in which about 10 lakh people are expected to participate, party chief Manoj Tiwari had told news agency PTI. "Senior BJP leaders and Union ministers will take part in 40 big events on International Yoga Day," he added.

Tiwari, who represents North East Delhi in the Lok Sabha, will perform yoga, along with BJP national general secretary Arun Singh and Union minister Purushottam Rupala, at Ghonda in his constituency.

All three BJP-led municipal corporations in the national capital have also planned events for the day.

The North Delhi Municipal Corporation (NDMC) will host an event at Qudsia Bagh, near Kashmiri Gate, ISBT, while the south corporation will hold an event at Talkatora Stadium. Union Finance minister Nirmala Sitharaman and East Delhi MP Gautam Gambhir will attend a yoga session at the Yamuna Sports Complex in Shahdara.