The commissioning ceremony took place at the Naval Dockyard in Mumbai. Navy Chief Adm R Hari Kumar was chief guest for the ceremony. 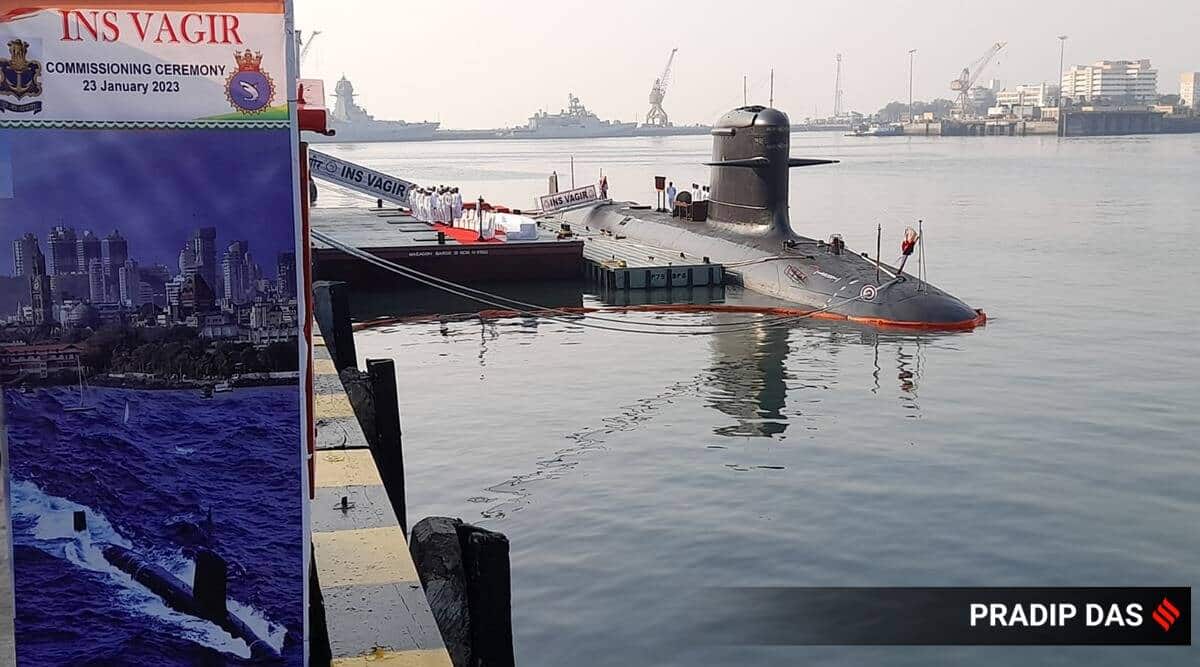 The submarine was delivered to the Indian Navy by M/s MDL on December 20, 2022. (Express photo by Pradip Das)

INS Vagir, the fifth stealth Scorpene-class Submarine, was commissioned into the Navy on Monday, making it the third submarine inducted into the Navy in 24 months and the 17th one to be in service with the Navy.

The commissioning ceremony took place at the Naval Dockyard in Mumbai. Navy Chief Adm R Hari Kumar was chief guest for the ceremony.

Explained |Here are the details of the Kalvari-class submarine

As per the Navy, INS Vagir will form part of the Western Naval Command’s submarine fleet and will be another potent part of the Command’s arsenal.

In a separate statement, the Naval Group on Monday said the sixth and last Scorpene-class submarine is undergoing sea trials at present and will be delivered to the Navy next year. INS Vagir will join INS Kalvari, INS Khanderi, INS Karanj and INS Vela, which had already been commissioned, respectively, in December 2017, September 2019, March 2021 and November 2021.

Vagir was launched on November 12, 2020, under Project 75 (P75) and was delivered to Navy on December 20 last year after completion of sea trials. She has the lowest build time among all indigenously built submarines till date.

The Scorpene Submarines have advanced stealth features and are also equipped with both long-range guided torpedoes and anti-ship missiles. It has six weapon launching tubes and 18 weapons.

With the latest induction, India now has 16 conventional submarines and a nuclear submarine, INS Arihant.

Speaking on the occasion, Admiral Kumar said INS Vagir will give a significant fillip to the Navy’s operational might and serve as a potent deterrent for any adversary. He said commissioning of Vagir reflects the coming of age of India’s shipbuilding industry, and the maturing of the country’s defence ecosystem.

“It is also a shining testimony to the expertise and experience of our shipyards to construct complex and complicated platforms and serves to reinforce Indian Navy’s unequivocal commitment and steadfast resolve to be a fully ‘AatmaNirbhar’ force by 2047,” he said.

12 policemen booked for killing farmer over ‘cow slaughter’ in UP